In April I found myself visiting St. Petersburg, the city where Nikolai Rimsky-Korsakov lived most of his 64 years, for the third time in just nine months. These trips have only been tangentially related to the Bard Music Festival’s exploration of the composer this summer, although they have offered welcome chances to follow through on various leads, to walk the streets he did, and to see his apartment, which now houses the Rimsky-Korsakov Museum. 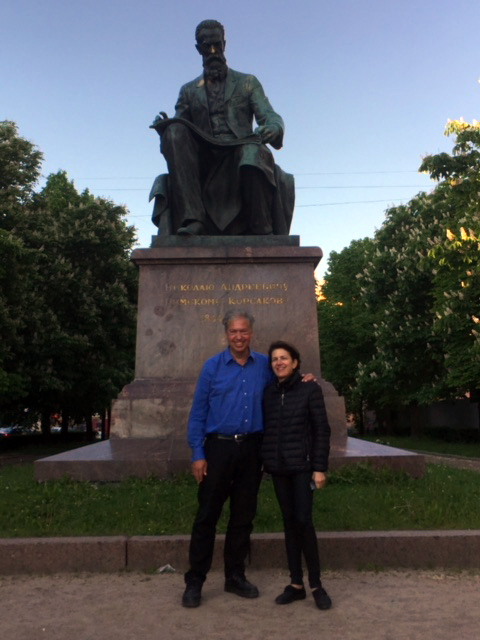 St. Petersburg on the Hudson
The immediate reasons for my trips related to Smolny College, a joint program of St. Petersburg State University and Bard College, the first liberal arts program in Russia, which Bard co-founded in 1998 Each summer a group of graduate students from Smolny’s program in Music Curatorial, Critical, and Performance Studies comes to the Hudson Valley for four weeks to study English and take classes connected to the Bard Music Festival (BMF). Regular attendees of BMF have no doubt encountered some of these students over the years.

St. Petersburg was the last city on my list of leading capitals of classical music that I visited. From my hometown of New York City to London, Paris, Vienna, Rome, Berlin, and beyond, I have relished opportunities to experience music in historic settings, often in the same halls and operas houses in which great compositions premiered, and to explore places still haunted by the masters. While I had been to Moscow in 1981, St. Petersburg eluded me until 2014.

Even on a first visit one can immediately feel an uncanny familiarity with much of the city because of detailed descriptions in Russian literature, particularly Dostoevsky and Nabokov. Unlike most other cultural centers, St. Petersburg is relatively new and built practically from scratch. Inspired by Peter the Great’s Westernizing vision at the beginning of the 18th century, it was an unlikely and inhospitable place to situate a great city, but the setting on the Neva River and the many constructed canals (Amsterdam was Peter’s principal model) resulted in extraordinary beauty. Despite devastating floods, disrupting revolutions, and the long World War II siege of Leningrad (as the city was then called), St. Petersburg has always rebounded.

While literature provides an imaginary introduction to the city, its museums, theaters, and concert halls offer chances to encounter a wide range of artistic masterpieces. The vast Hermitage Museum houses one of the supreme collections of visual art. This 1,500-room complex of buildings is, like the Louvre, itself an architectural marvel. Alexander Sokurov’s extraordinary film Russian Ark (2002) provides a 96-minute single-shot Steadicam tour through the ages and will be screened at the SummerScape film series on July 26. The chance to see magnificent paintings by Rembrandt, Leonardo, and other old masters in the Winter Palace is now complemented by the newly opened galleries of the General Staff Building, which house 19th- and 20th-century art, including major works by Picasso, Matisse, and others.

The masterpieces of Western art that Catherine the Great began to collect for the Hermitage in the late 18th century are of the stature one encounters at the leading international museums. Far less familiar and much closer to home is the art exhibited in the Russian Museum, housing national treasures. Most of these are artists unknown in the West. Some images will be familiar from album covers, such as portraits of composers like Ilja Repin’s of Modest Mussorgsky, or from set designs and collaborations with the enterprising impresario Sergei Diaghilev.

I have become particularly fascinated by the Russian Museum because it allows chances to make connections between musical trends—from Mikhail Glinka through the Mighty Five to Sergei Prokofiev, Dmitrii Shostakovich, and Soviet-era composers—and visual ones. You can compare responses in different artistic media to issues of nationalism, Orientalism, autocracy, folklore, history, socialist realism, and so forth. One cannot help thinking that a particular painting is the visual counterpart to a tone poem by Rimsky-Korsakov or a symphony of Shostakovich. We often encounter music used for film soundtracks, and I found my inner ear providing a kind of soundtrack while looking at paintings. It is also fascinating to think about technique and training, which was more advanced for 19th-century Russian painters, many of whom studied abroad, than for self-taught native composers, who lacked conservatories until the brothers Anton and Nikolai Rubinstein founded them in St. Petersburg and Moscow, respectively, in the 1860s.

And then, inevitably, there is the politics—from Tsar Nikolai I’s cardinal values of “Orthodoxy, Autocracy, and Nationhood” through the communist era to the Russia of Vladimir Putin today. My trip to Moscow in 1981, during the dark Brezhnev days, made an indelible impression on me concerning daily life in the Soviet Union. Politics under 300 years of Romanov rule is perhaps less known than under communism, and our knowledge may come largely from literature as well as from celebrated operatic presentations that deal with early history, back to Ivan the Terrible in Rimsky-Korsakov’s The Tsar’s Bride, which closes the Bard Festival this summer on August 19. Mussorgsky’s Boris Godunov and Dvořák’s Dimitrii, which Bard staged last summer, concern the “Time of Troubles” just before the Romanovs came to power in 1613, itself the subject of the first great Russian opera, Glinka’s A Life for the Tsar (1836). These political themes will be the subject of Panel 2 this summer on August 18.

Another great joy is experiencing St. Petersburg’s unusually vibrant musical life, at least with respect to classical music of the 19th and 20th centuries. It is thrilling to see Boris Godunov at the original Mariinsky Theater, where it premiered, and to have the chance to see Russian operas by Glinka, Tchaikovsky, Rimsky-Korsakov, and others that are relatively rarely performed outside of Russia. Most revelatory for me, since I attend far less frequently in New York, is going to the ballet and experiencing the grand Imperial style in choreography that has changed little in more than a century. In April, I saw Giselle and Romeo and Juliet marvelously performed, but also more unusual fare, such as Carnaval, Schumann’s great piano composition that so influenced Mussorgsky’s Pictures at an Exhibition, in a collaborative orchestration by Rimsky-Korsakov, Alexander Glazunov, Anatoly Liadov, and others. Michel Fokine choregraphed this for Diaghilev’s Ballets Russes in 1910. There were many such joint ventures among Russian composers, not just ballets like Les Sylphides, but also operas, keyboard and chamber compositions, and so forth. Carnaval was paired that night, as in 1910, with a notorious production of Rimsky-Korsakov’s Scheherazade, an Orientalist orgy so politically incorrect that it would be almost unimageable to present this in America today. As with other productions I have seen in St. Petersburg offering a demonized Islamic other, I am left feeling uneasy but grateful to experience the historical context that was so much a part of 19th- and early 20th-century theater, ballet, and opera. Not so many years from now productions of Puccini’s Madama Butterfly, long one of the most often performed operas in America, may seem just as awkward.

My trip in April coincided with Orthodox Easter, this year falling a week later than in the West. One of Rimsky-Korsakov’s best-known pieces, to be played on the opening concert this summer, is his Easter Festival Overture, and on the August 19 choral concert we will hear excerpts from Rachmaninoff’s remarkable All-Night Vigil, which I heard complete in concert. I attended a lengthy midnight Mass at the resonate Kazan Cathedral. I also went to the Tikhvin Cemetery where almost all of the great Russian composers are buried, Rimsky-Korsakov alongside the others in the gang of Five: the Rubinstein brothers, Glinka, and Tchaikovsky.

In October 1863, while serving as a young naval cadet, Rimsky-Korsakov docked in New York harbor and spent the next six months in America. He and some shipmates made the trip up the Hudson River, which he found “very beautiful,” to Albany, where they took a train to Niagara Falls. Rimsky-Korsakov thus passed by our campus, which more than a century and half later honors his achievement and that of his marvelous hometown of St. Petersburg.

Back to Blog Home