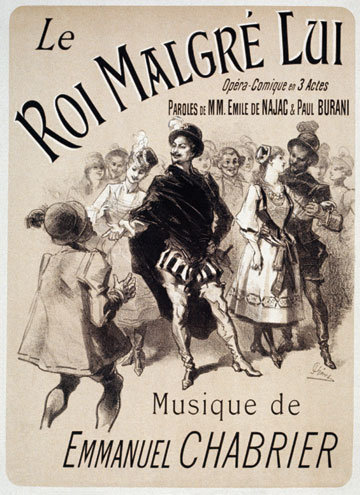 The King in Spite of Himself

Call 845-758-7948 for information about premium seating with special benefits, including reserved parking.

The Opera Talk for The King in Spite of Himself will take place at 1 pm on Sunday, July 29 in Sosnoff Theater. Free and open to the public.

A coproduction with the Wexford Festival Opera.

“From the wondrous opening fanfare for brass and winds, with its wayward phrase structure and playful hints of medieval harmony, the score is glorious.”—Anthony Tommasini, New York Times

It’s always been lonely at the top, but has any monarch been lonelier than Henri de Valois? In Emmanuel Chabrier’s witty comic opera, this hapless 16th-century French noble has been chosen by the Poles to be their king, although various factions are already plotting against him. Moreover, poor Henri is repelled by the weather, the food, and the fashion, and pines for his milieu in Anjou. Farce ensues when he tries to eschew the crown, but fate is sometimes easier to reluctantly accept than to escape.

A contemporary of Camille Saint-Saëns, the subject of this year’s Bard Music Festival, Chabrier composed two highly regarded orchestral works, España and Joyeuse marche, as well as operas, songs, and piano music. Of The King in Spite of Himself, Maurice Ravel declared that its opening bars forever changed the course of French harmony; indeed, Ravel confessed to having been influenced more by Chabrier than any other composer. This production of The King in Spite of Himself, the first staged revival of Chabrier’s 1887 version, is directed by Thaddeus Strassberger, who also directed Bard SummerScape’s acclaimed productions of Les Huguenots (2009) and The Distant Sound (2010).