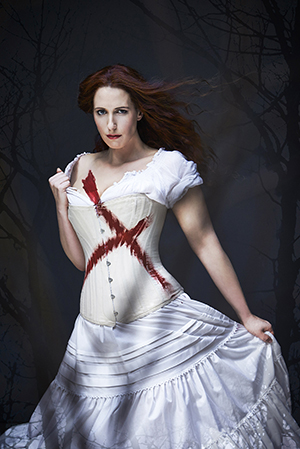 
A Behind the Scenes Look at Euryanthe 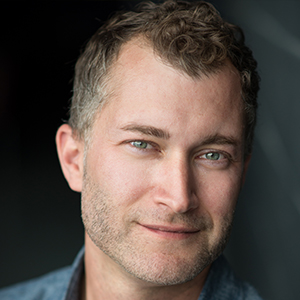 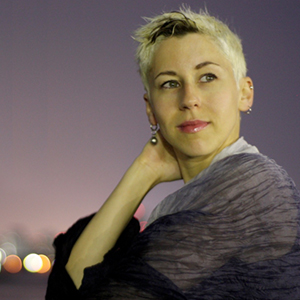 A native of Odessa, Ukraine, and Tel-Aviv, Israel, Tzykun holds an M.F.A. from New York University's Tisch School of the Arts and a B.F.A. from Tel-Aviv University. She currently lives and works in New York City and is a member of IATSE Local 829. 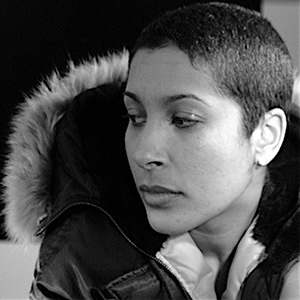 Previous works include Love, Loss, and What I Wore at the Westside Theatre; Die, Mommie, Die! at New World Stages (Winner of the Lucille Lortel Award); The Tutors at 2econd Stage Theatre Uptown; Once On This Island at Paper Mill Playhouse; Roberto Devereux, Maria Stuarda, Anna Bolena, and Werther at Minnesota Opera; Maria Stuarda at Houston Grand Opera; world premiere of Life is a Dream at Santa Fe Opera; Monodramas and Mose in Egitto at New York City Opera; and Die Leibe der Danae at Bard SummerScape. Upcoming credits include Anna Bolena at Lyric Opera of Chicago, The Manchurian Candidate and Carmen at Minnesota Opera, and Norma at San Francisco Opera and The Gran Teatre de Liceu in Barcelona. www.jessicajahn.com
D.M. Wood, Lighting Designer 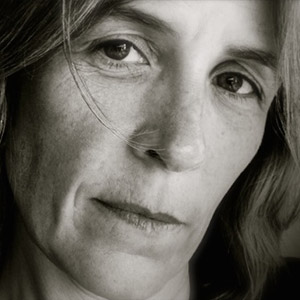 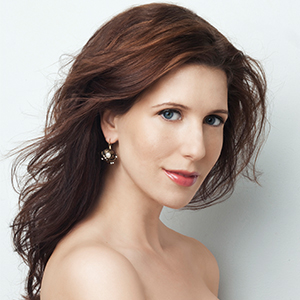 Photo by Victoria Janashvili
Soprano Ellie Dehn has appeared in many of the world's leading opera houses including, Teatro alla Scala, the Metropolitan Opera, Bayerische Staatsoper, San Francicso Opera, Los Angeles Opera, Houston Grand Opera, San Diego Opera, Santa Fe Opera, Santa Cecilia, and the opera houses of Geneva, Rome, and Bologna. Most recently she debuted Henry VIII by Saint-Saëns as Catherine of Aragon at the Bard Music Festival, then returned to Teatro alla Scala as Musetta in Puccini's La bohème, followed by the Cleveland Orchestra for Nielsen's 3rd Symphony, in addition to debuting Opera Colorado as Donna Anna in Mozart's Don Giovanni, and returning to San Francisco as Fiordiligi in Mozart's Così fan tutte. In 2012 she debuted Teatro alla Scala as Antonia in Hoffmann and returned to the Metropolitan Opera as Donna Elvira.  VIEW MORE >>
Future engagements include her Royal Opera House Covent Garden debut as Contessa in Mozart's Le Nozze di Figaro, Fiordiligi in Cagliari, Donna Elvira at Teatro Massimo in Palermo, Donna Anna with the San Diego Opera, and the title role in Weber's Euryanthe at Bard SummerScape, and her debut as Violetta in Colorado. Recent successes include debuts with the San Francisco Opera and the Houston Grand Opera as Contessa in Mozart's Le Nozze di Figaro, her Teatro alla Scala debut as Antonia in Les Contes d'Hoffmann, Donna Elvira in Mozart's Don Giovanni and Musetta in La bohème for the Metropolitan Opera, and Helena in Britten's A Midsummer Nights Dream in Rome's Teatro dell' Opera. 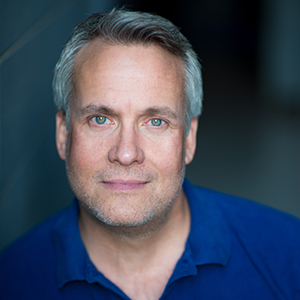 Photo by Simon Pauly
American tenor William Burden has won an outstanding reputation in a wide-ranging repertoire throughout Europe and North America. He has appeared in many prestigious opera houses in the United States and Europe, including the Metropolitan Opera, San Francisco Opera, Lyric Opera of Chicago, Teatro alla Scala, Opéra National de Paris, and the Bayerische Staatsoper. His many roles include the title roles of Faust, Pelléas et Mélisande, The Rake's Progress, and Roméo et Juliette; Captain Vere in Billy Budd, and Don Jose in Carmen. Also a supporter of new works he created the roles of Peter in Mark Adamo's The Gospel of Mary Magdalene, Dan Hill in Christopher Theofanidis's Heart of a Soldier, Frank Harris in Theodore Morrison's Oscar, Gilbert Griffiths in Tobias Picker's An American Tragedy, Dodge in Daron Hagen's Amelia and Niklas Sprink in Kevin Puts's Pulitzer Prize-winning Silent Night. In concert, he has appeared with the Chicago Symphony Orchestra, Philadelphia Orchestra, Minnesota Orchestra, St. Louis Symphony, Berlin Philharmonic, BBC Symphony Orchestra, and at the Edinburgh Festival.
Wendy Bryn Harmer, Eglantine 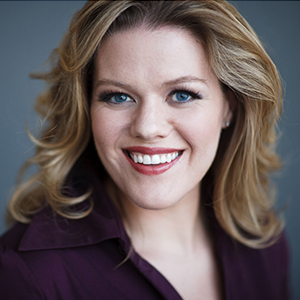 Photo by Jeff Singer
This season, soprano Wendy Bryn Harmer made her debut at Houston Grand Opera as Rosalinde in Die Fledermaus and returned to the Metropolitan Opera for The Magic Flute, and next season makes her house and role debuts at the English National Opera as Eva in Die Meistersinger von Nürnberg and Opera Omaha as Lenore in Fidelio. A graduate of the Metropolitan Opera's Lindemann Young Artist Development Program, she has appeared there in the HD broadcasts of the Ring Cycle and The Magic Flute and in productions of Khovanshchina, Parsifal, Die ägyptische Helena, and Jen?fa. Other recent opera engagements have included multiple roles in the Seattle Opera's production of the Ring Cycle, Die Walküre at the San Francisco Opera, Glauce in Medea at the Glimmerglass Festival, Wanda in La Grande-Duchesse de Gérolstein and Vitellia in La Clemenza di Tito at Opera Boston, Adalgisa in Norma at the Palm Beach Opera, and Mimi in La Bohéme at the Utah Opera Festival.
Ryan Kuster, Lysiart 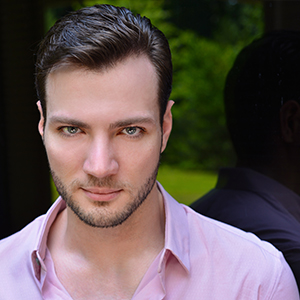 Bass-baritone Ryan Kuster has gained vast attention on the west coast for his accolades in San Francisco, where he recently completed a two-year residency and over 80 performances in the prestigious Adler Fellowship Program of San Francisco Opera. In 2012, he made his symphonic debut with the Los Angeles Philharmonic singing the role of Masetto in their highly acclaimed production of Don Giovanni, directed by Christopher Alden, with costumes by Rodarte, and led by Gustavo Dudamel. In addition, he returned to Wolf Trap Opera to debut the title role of Don Giovanni and made his National Symphony debut performing Beethoven's Ninth Symphony. This season, he will sing Angelotti in Tosca with Madison Opera, Colline in La Bohème with Arizona Opera, Escamillo in Carmen with both Opera Colorado (company debut) and Virginia Opera, as well as the role of Lysiart in Euryanthe with Bard SummerScape.  VIEW MORE >>
In the last year of his Adler Fellow tenure, Kuster returned to San Francisco Opera to perform Count Ceprano in Rigoletto, the 4th Noble in Lohengrin, as well as Angelotti in Tosca. Outside of San Francisco, he most recently performed Alidoro in Nashville Opera's production of La Cenerentola; sang Masetto in Don Giovanni with Cincinnati Opera, and appeared in Dallas Opera's production of Turandot; and performed Angelotti in Tosca with Pacific Symphony. 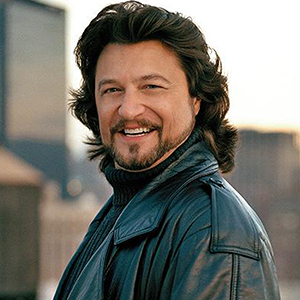 American bass Peter Volpe continually receives critical and popular acclaim on four continents. Possessing a vast and ever-expanding repertoire of over 80 roles in six languages, his captivating style and interpretive skill embraces the depth of historical and fictional characters. His current engagements include Marquis of Calatrava in La forza del destino with Washington National Opera; Philip II in Don Carlo with Vancouver Opera and Austin Lyric Opera; Raimondo in Lucia di Lammermoor with Portland Opera; Verdi's Requiem with the New Jersey Symphony and the Essential Verdi concert with the Washington Chorus at the Kennedy Center. Next season, he performs Beethoven's Ninth Symphony with the Chattanooga Symphony, Sparafucile in Rigoletto with Arizona Opera, and Frere Laurent in Romeo et Juliette with Austin Lyric Opera. He has also made a recent foray into the Wagnerian repertoire, having recently performed Hunding in Act I in Die Walküre with the American Symphony Orchestra at Bard College, an All Wagner concert with North Carolina Opera, and Daland in The Flying Dutchman at Glimmerglass Opera. He will perform the role of Daland again with Washington National Opera and the Florentine Opera of Milwaukee next season.
Ann Chiaverini, Emma 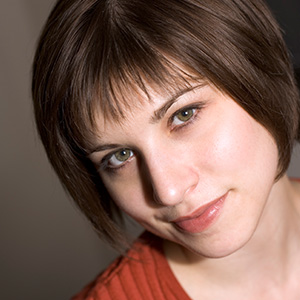 Ann Chiaverini, originally from Pittsburgh, PA, is a Brooklyn-based freelance dance artist who has worked most recently with the Metropolitan Opera (Rigoletto, Parsifal) and Dušan Týnek Dance Theatre. Performance highlights include Bard SummerScape opera productions of Les Huguenots and Le roi malgré lui, Martha Clarke's Garden of Earthly Delights (Off-Broadway), Michigan Opera Theatre's Aida, and performing in the works of many accomplished choreographers and visual artists in NYC and the Detroit area. She has taught and organized dance and arts-in-education programs for schools, arts organizations, and festivals both nationally and internationally, most recently working with American Ballet Theatre's education initiatives. She holds a B.F.A. in dance from The Joffrey Ballet School/New School University.

Euryanthe is betrothed to Count Adolar, who has recently returned from battle. In a bet with Adolar, the jealous Count Lysiart stakes his land and fortune on Euryanthe’s infidelity and asserts that he can win her hand. Adolar demands that Lysiart show some proof of his victory should Euyanthe prove untrue.

The loyal, orphaned Euryanthe has given refuge to the abandoned Eglantine. Eglantine is in love with Adolar and secretly determines to effect Euryanthe’s downfall. Lysiart, who previously had attempted to gain Euryanthe’s favor, assists Eglantine. After Eglantine questions her, Euryanthe reveals Adolar’s darkest secret: his sister, Emma, killed herself after losing her lover in battle. Emma’s soul can find no rest until the ring lying in her tomb is moistened with the tears of an injured and innocent maiden. Euryanthe, who has been praying each night at Emma’s tomb, had promised Adolar she would keep his secret, and, too late, she repents having told it to Eglantine. After Euryanthe leaves, Eglantine vows that she will denounce Euryanthe to Adolar. Lysiart arrives to take Euryanthe to Adolar.

Lysiart laments both of his guilt and his love. Eglantine visits Emma’s tomb, takes the ring, and gives it to Lysiart, who had almost given up on his wager with Adolar. She lets him know the secret behind the ring, and he proposes marriage to Eglantine.

Before an assembly, Adolar reveals his anxiety while still longing for his bride. When Euryanthe arrives, Lysiart displays the ring to Count Adolar, claiming that Euryanthe has revealed the secret of his sister’s suicide. Euryanthe protests her innocence, as the men humiliate her and accuse her of infidelity. Adolar gives up his possessions to Lysiart and rushes off into the forest with Euryanthe.

In the forest, Adolar intends to kill Euryanthe and then himself—in spite of her protestations of innocence. They are suddenly attacked by a serpent and Euryanthe throws herself between her lover and the monster. Adolar kills the serpent. He cannot find the heart to kill the one who would have given her life for his, and he goes off, leaving her to her fate. Euryanthe longs for death, but after the king and his hunters arrive, she recounts the story of her woe and the treachery of Eglantine. She collapses as they lead her away.

Meanwhile, the wedding of Eglantine and Lysiart is about to take place. Eglantine, struck by guilt and the silence of the courtiers, and still in love with Adolar, thinks that Emma appears to her as a ghost. Adolar shows himself, and challenges Lysiart to fight. The king arrives, and to punish Adolar for his distrust of Euryanthe, tells him that she is dead. Eglantine, triumphant at the supposed death of her rival, makes known the plot and is slain by the furious Lysiart. As Eglantine dies, Euryanthe enters and rushes to Adolar. Lysiart is led off, and Adolar’s sister finds peace at last because her ring was moistened by the tears of the innocent Euryanthe.

Looking for the 2020 UPSTREAMING presentation of Euryanthe?  Click here to watch!

Euryanthe is a story of jealousy and betrayal. A redheaded ghost haunts a dreamlike landscape where supernatural forces collide with everyday hopes of comfort and security. Layers of deceit and repressed desire motivate jealous lovers travelling in a darkly gothic world.


Carl Maria von Weber, an acquaintance of Schubert's and one of the most influential early Romantic composers, wrote Euryanthe in 1823. The gloriously beautiful score replaces sections of spoken dialogue common to German opera of the time with continuous music. This powerful work left its mark on Richard Wagner's Lohengrin and later pieces.

Running time for this performance is approximately three hours, including two intermissions.