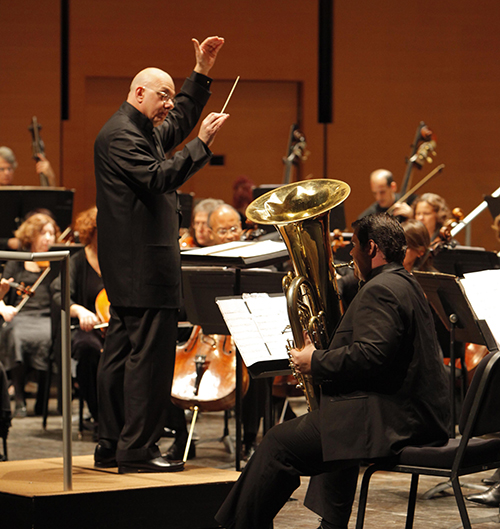 Pianist Maryna Kysla ’15, from Kharkov, Ukraine,  is one of winners of The Bard College Conservatory of Music Concerto Competition in 2014. She started piano lessons at the age of five and graduated from the music high school in Kharkov in 2010. At the age of nine, she won the first of 10 awards at international piano competitions for young pianists in Moscow, Uzhgorod, Feodosiya, Donetsk, and Dnepropetrovsk during the period from 2002 through 2008. In 2002, as winner of the Ludmila Knezkova-Hussey International Competition, she performed with the WKO Symphony Orchestra in New Brunswick, Canada. She has also performed in Germany, Spain, Japan, Belgium, and frequently appeared as a soloist with the Kharkov Philharmonic Orchestra . She has participated in numerous summer music festivals including in Kiev, and the Musica Mundi in Belgium. In 2010, she entered The Bard College Conservatory of Music where she has been studying with Peter Serkin and Matti Raekallio. Her second major is Russian and Eurasian Studies.

Leon Botstein is now in his 23rd year as Music Director and Principal Conductor of the American Symphony Orchestra. He has been heralded for his visionary zeal, creating concert programs that give audiences a once-in-a-lifetime chance to hear live performances of works that are ignored in the standard repertory, and inviting music lovers to listen in their own way to create a personal experience. He is also artistic  co-director of Bard SummerScape and the Bard Music Festival, which take place at The Richard B. Fisher Center for the Performing Arts at Bard College, where he has been president since 1975. He is also conductor laureate of the Jerusalem Symphony Orchestra, where he served as music director from 2003–2011.

Highly regarded as a music historian, Botstein’s most recent book is Von Beethoven zu Berg: Das Gedächtnis der Moderne (2013). He is the editor of The Musical Quarterly, the author of numerous articles and books, and he is currently working on a sequel to Jefferson’s Children, about the American education system. For his contributions to music he has received the award of the American Academy of Arts and Letters and Harvard University’s prestigious Centennial Award, as well as the Cross of Honor, First Class, from the government of Austria. Other recent awards include the Caroline P. and Charles W. Ireland Prize, the highest award given by the University of Alabama; the Bruckner Society’s Julio Kilenyi Medal of Honor for his interpretations of that composer’s music; the Leonard Bernstein Award for the Elevation of Music in Society; and Carnegie Foundation’s Academic Leadership Award. In 2011, he was inducted into the American Philosophical Society.

Now in its 53rd season, the American Symphony Orchestra (ASO) was founded in 1962 by Leopold Stokowski, with a mission of making orchestral music accessible and affordable for everyone. Music Director Leon Botstein expanded that mission when he joined the ASO in 1992, creating thematic concerts that explore music from the perspective of the visual arts, literature, religion, and history, and reviving rarely-performed works that audiences would otherwise never have a chance to hear performed live.

The orchestra’s Vanguard Series, which includes these themed programs as well as an opera-in-concert and a celebration of an American composer, consists of six concerts annually at Carnegie Hall. ASO goes in-depth with three familiar symphonies each season in the popular series Classics Declassified at Peter Norton Symphony Space, and has an upstate home at The Richard B. Fisher Center for the Performing Arts at Bard College, where it performs in an annual subscription series as well as Bard’s SummerScape festival and the Bard Music Festival. The orchestra has made several tours of Asia and Europe, and has performed in countless benefits for organizations including the Jerusalem Foundation and PBS.

Many of the world’s most accomplished soloists have performed with the ASO, including Yo-Yo Ma, Deborah Voigt, and Sarah Chang. The orchestra has released several recordings on the Telarc, New World, Bridge, Koch, and Vanguard labels, and many live performances are also available for digital download. In many cases, these are the only existing recordings of some of the rare works that have been rediscovered in ASO performances.