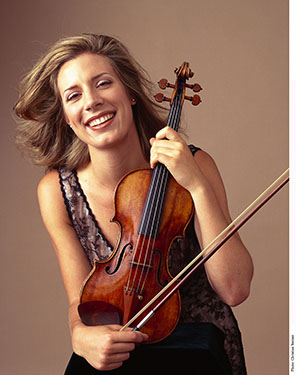 Violin virtuoso Elizabeth Pitcairn has earned a reputation as one of America’s most beloved soloists. She made her New York debut at Lincoln Center’s Alice Tully Hall in 2000 with the New York String Orchestra and appeared as a soloist with the Philadelphia Orchestra at the Academy of Music. She made her Walt Disney Concert Hall debut with the California Philharmonic and at Weill Recital Hall at Carnegie Hall. She returned to China to perform the Bruch Violin Concerto with the Shenzhen Symphony Orchestra. This season Pitcairn gives recitals in New York and Pennsylvania with pianist Barbara Podgurski, in Hungary with Aniko Szokody, and in Mexico with Louise Thomas, and makes her Fisher Center recital debut with Cynthia Elise Tobey. She also performs in Bulgaria with the Classic FM Orchestra, and records the Bruch and Beethoven Violin Concerti, conducted by Maxim Eshkenazy.  VIEW MORE >>
Pitcairn performs with one of the world’s most legendary instruments, the “Red Mendelssohn” Stradivarius of 1720, said to have inspired the Academy Award–winning film The Red Violin. The 10th Anniversary Meridian Collection DVD (2008) of The Red Violin features Pitcairn in a special feature called “The Auction Block.”

Born in 1973, in Bucks County, Pennsylvania, Pitcairn comes from a close-knit musical family (her mother is a Juilliard-trained cellist). She began playing the violin at age three and made her debut with orchestra at 14. She studied with preeminent violin professor Robert Lipsett at the University of Southern California. Pitcairn is a member of the faculty at the Colburn School in Los Angeles, California; an alumna of the Marlboro Music Festival; and former faculty at USC. She has performed with the Vaasa City Symphony in Finland, and the Helsingborg and Jönkopping Symphonies in Sweden under the baton of Hannu Koivula. She has also appeared in Italy, France, Germany, the United Kingdom, Bulgaria, and Brazil, and has performed at the Saratoga Performing Arts Center with pianist André Michel Schub. Pitcairn is the CEO and artistic director of the Luzerne Music Center (LMC) Festival in upstate New York. LMC provides training for gifted music students ages nine to 18.

Pitcairn commissioned Sweden’s renowned composer Tommie Haglund’s Hymns to the Night, which she premiered in 2005 and later recorded with the Helsingborg Symphony for Phono Suecia, receiving a Swedish Grammi nomination. She also commissioned a Sonata for violin and piano by Russian composer David Finko. Her discography includes the Tchaikovsky and Mozart No. 5 Concerti with the Slovenia Radio Television Orchestra, and the Bruch Scottish Fantasy and Sarasate Carmen Fantasy with the Sofia Philharmonic Orchestra of Bulgaria. Pitcairn is represented in Italy, France, and Russia by the Premiere Artists Agency. Her gowns are provided courtesy of LaFemme Fashion. The “Red Mendelssohn” Stradivarius is fitted with Wittner Finetune-Pegs and travels in a titanium case provided by GEWA. She also performs on a replica of the “Red Mendelssohn,” made for her by luthier Christophe Landon. For Pitcairn’s tour schedule, interviews, and a history of the “Red Mendelssohn” Stradivarius, please visit www.redviolin.com.

Cynthia Elise Tobey was accepted at the age of 10 to The Juilliard School of Music, where she studied piano with Herbert Stessin for six years. She made her orchestral debut at 14 with the Hudson Valley Philharmonic. Tobey is a native of Rhinebeck, New York, where she grew up and attended Dutchess Day School (2000) in Millbrook and Rhinebeck High School. Her piano studies began locally with Margaret Shafer of Annandale-on-Hudson and Blanca Uribe of Vassar College.  VIEW MORE >>
Tobey earned her B.M. from the Curtis Institute of Music (2007), studying with Seymour Lipkin; her M.A. from Teachers College, Columbia University; and an artist studies diploma from the Konservatorium Wien in Austria. A doctoral candidate at Columbia University, she currently studies with Evelyne Crochet, protégé and principal teaching assistant of Rudolf Serkin.

A dedicated piano teacher and music educator, Tobey has been on the piano faculty at the Luzerne Music Center since 2008, where she is the chair of piano studies, chamber ensemble instructor, and frequent performer on both the Faculty Concert Series and the Chamber Music Festival.

Sara Carina Graef’s works have been performed throughout the United States as well as in Canada, Turkey, and the Czech Republic. She won the inaugural Northridge Prize for Composition for her orchestral piece night shows to my eyes the stars, and the Premio Citta’ di Pescara Composition Competition in Italy for her piano solo Nottanosti. Graef recently served as composer in residence at the Luzerne Music Center in New York, and has been an artist in residence at the Wurlitzer, Ucross, and Ragdale Foundations; the Oregon Bach Festival; the Ernest Bloch Festival; and the Atlantic Center for the Arts. She received her B.M. in composition and flute performance from Southern Methodist University and her M.M. and D.M.A. degrees in composition from the University of Southern California. She is a professor of music at California State University, Los Angeles, where she teaches composition and theory and directs the Composer/Performer Collective.

History of the “Red Mendelssohn” Stradivarius

Celebrated violin virtuoso Elizabeth Pitcairn performs in partnership with the legendary 1720 “Red Mendelssohn” Stradivarius, the 1990 Christie’s auction of which is said to have inspired the 1999 Academy Award–winning film, The Red Violin.

The historic violin was crafted by Antonio Stradivari, who lovingly made his instruments centuries ago in his small shop in Cremona, Italy, and remains the most famous violin maker of all time. Not long after its creation, the instrument vanished from the radar screen; no one knows where or to whom the violin belonged for more than 200 years, spawning any number of historians, writers, journalists, critics—as well as Canadian filmmaker François Girard—to speculate on the violin’s mysterious history. Girard’s imaginative speculations became the narrative for his beloved film, The Red Violin.

The 1720 “Red Mendelssohn” would eventually surface in 1930s Berlin, having been purchased by an heir to the great composer Felix Mendelssohn. In 1956, it was acquired by a New York industrialist, who kept the instrument in impeccable performance condition; much of its original burnish has survived, and it is thought to be one of the best sounding and most beautiful of Stradivari’s remaining violins. On Thanksgiving Day in 1990, the industrialist opted to put the Red Violin on the auction block anonymously at Christie’s of London. While some of the world’s most powerful people sought to win the coveted instrument, it landed in the hands of then 16-year-old American solo violinist Elizabeth Pitcairn. Pitcairn would remain silent about owning the violin until her rapidly burgeoning career brought her into the public eye on international concert stages, after nearly three decades of rigorous training by the world’s most esteemed violin teachers.

Pitcairn would come to view the violin as her life’s most inspiring mentor and friend. Many have said that the violin has finally found its true soul mate in the gifted hands of the young violinist. She is the first known solo artist to bring it to the great concert halls of the world and has made it her goal to share the violin’s magical beauty of sound with people of all ages, professions, and cultures. Today, Pitcairn and the “Red Mendelssohn” Stradivarius violin continue to foster one of classical music’s most compelling partnerships.

Vishuddha is the Sanskrit name for the fifth chakra, also known as the “throat chakra.” Vishuddha controls the principle of sound and the sense of hearing. It is thought to govern our speech and our creative expression, and its balance defines our honesty and how well we express ourselves.

Vishuddha’s color is sky blue and its element is ether. It is represented by a circle surrounded by 16 purple or smoke-colored petals containing a downward-pointing triangle. Within the triangle sits a circular white region, representing the full moon.

We express our choices and our internal truths by speaking them through this fifth chakra. The secret of immortality is said to reside in the fifth chakra. When it is open, the negative experience is transformed into wisdom and learning. When Vishuddha is closed, we undergo decay and death.

In mythology, after a battle between the gods and the demons, the god Vishnu attempted to resolve the conflict between good and evil by churning up the ocean. This released many things from the ocean, including both poison and the nectar of immortality. The gods drank the nectar, but only Shiva would drink the poison, which became lodged in his throat.

Singing is believed to stimulate the throat chakra.

Blue Vishuddha explores the interplay between being open (acceptance, tolerance, receptiveness) and being closed (disagreement, dissent, friction), with pervasive exchanges between major seconds and minor seconds, between smooth consonances and gritty dissonances, and between flowing lyricism and harsh, percussive rhythms. The opening motive, with its falling and rising shape, mirrors that of the downward-pointing triangle inside Vishuddha, within which sits the moon. The repetition of that rising and falling motion throughout the piece recalls the petals around the outside of Vishuddha. Blue is both the color of Vishuddha and it is also the term in music when a minor interval is used when a major one is expected. The fifth chakra is associated with trusting one’s intuition and expressing one’s needs so that the universe may provide them, and this piece was written with a great deal of trust placed on intuition. I did a lot of singing throughout the process of writing this piece—both a physical and a metaphysical element in the creation of the work.

The piece was commissioned by Elizabeth Pitcairn in the summer of 2014, and is dedicated both to her and to Vishuddha.

Gabriel Fauré
Sonata No. 1 for violin and piano

Ludwig van Beethoven
Sonata No. 9 for violin and piano

Running time for this performance is one hour 40 minutes, including one intermission.