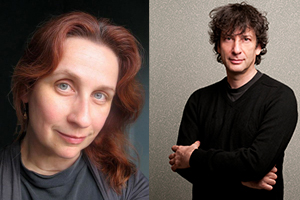 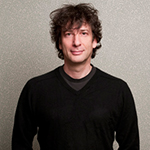 Neil Gaiman is listed in the Dictionary of Literary Biography as one of the top ten living post-modern writers and is a prolific creator of works of prose, poetry, film, journalism, comics, song lyrics, and drama. His work crosses genres and reaches audiences of all ages. His most recent adult novel, The Ocean at the End of the Lane is a #1 New York Times Bestseller; other adult works include Neverwhere, Stardust, Anansi Boys, and Good Omens (with Terry Pratchett); the award-winning Sandman series of graphic novels; and the short story collections Smoke and Mirrors and Fragile Things. His novels for younger readers include Coraline and The Graveyard Book, which was awarded the Newbery Medal, the highest honor given children’s literature, as well as the Locus Award for Best Young Adult Book and the Hugo Award for Best Novel.  VIEW MORE >>
The awarding of the 2010 UK Carnegie Medal makes Gaiman the first author ever to win both the Newbery Medal and the Carnegie Medal with the same book. His most recent book, Fortunately, the Milk (“the funniest work of literature since Catcher in the Milk”) has been on bestseller lists since publication, and a recent reading and performance of the entire book sold out Central Hall in Westminster. His work has been adapted for film, television, and radio, including Stardust (2007), directed by Matthew Vaughan, and the animated feature film Coraline (2009), which secured a BAFTA nomination for Best Animated Film and was nominated for an Oscar in the same category. In March 2013, BBC Radio broadcast a new six-episode production of Neverwhere, with a star-studded cast that includes James McAvoy, David Harewood, Benedict Cumberbatch, and Romola Garai. Gaiman has written and directed for film and television, and his 2011 episode of Doctor Who, “The Doctor’s Wife,” caused The Times (London) to describe him as “a hero” and won the Hugo, Ray Bradbury, and SFX awards. Make Good Art, the text of a commencement speech Gaiman delivered at Philadelphia’s University of the Arts, was published in a volume designed by renowned artist Chip Kidd; his recent speech in support of libraries and reading will be published as a book in 2014. More than 1.8 million people follow him on Twitter. Born in Hampshire, he currently lives in Cambridge, Massachusetts, with his wife, the rock star Amanda Palmer, with whom he sometimes performs. 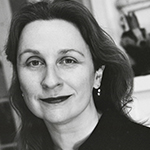 Audrey Niffenegger is a visual artist and a writer. She lives in Chicago.

Niffenegger makes drawings, prints, photographs, and paintings. She specializes in making visual books, which she writes, illustrates, prints and binds herself. These books include The Three Incestuous Sisters, and The Adventuress, which were published in trade editions by Harry N. Abrams (U.S.A.) and Jonathan Cape (U.K.) in 2005 and 2006. Her comic, The Night Bookmobile, was originally serialized in the London Guardian in 2008 and was published in book form by Abrams and Cape in 2010.

Her second novel, Her Fearful Symmetry, was published by Scribner and Jonathan Cape in 2009. It was an international bestseller and received a favorable front-page review in the New York Times Book Review. She is in the process of adapting it for the screen herself.

Niffenegger helped to found the Columbia College Chicago Center for Book and Paper Arts. Her art has been exhibited at Printworks Gallery since 1986. Her work has been collected by the Newberry Library, the National Museum for Women in the Arts, the Houghton Library, the Art Institute of Chicago, the Library of Congress, Northwestern University, and the Rijksmuseeum Meermano in the Hague. She was given her first retrospective in June 2013 at the National Museum of Women in the Arts in Washington DC. The catalog of the exhibition, Awake in the Dreamworld, was published by powerHouse Books in 2013.

In 2013 her most recent book, Raven Girl, was adapted into a dance for the Royal Ballet in London by Wayne McGregor, resident choreographer.

She has been collaborating on comics with Eddie Campbell, including Thursdays, Six to Eight p.m., which was published in the Guardian in May 2014.

She is currently a professor in the creative writing department of Columbia College. She teaches a seminar on writing novels.

Niffenegger is a Ragdale Distinguished Fellow. She has also been a resident at Yaddo.

She is currently working on her third novel, The Chinchilla Girl in Exile, and on a sequel to The Time Traveler’s Wife.