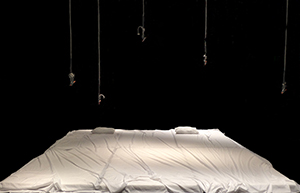 Performer, writer, blogger, and composer Amanda Palmer is best known for her role as leader of the “punk cabaret” band The Dresden Dolls. After making her living from 1997–2003 as a Harvard Square “living statue” known as The Eight Foot Bride, studying at Wesleyan University, getting rejected by Robert Wilson as a potential intern, and studying for two weeks with mime master Marcel Marceau, Palmer turned to music full-time and has spent the past ten years touring internationally with rock bands and symphonies including the Boston Pops. This is Palmer's third collaboration with director Steven Bogart: they also mounted Kander & Ebb's Cabaret at the American Repertory Theater for a sold-out run of 42 performances and created a devised show with the students of Lexington High School, With The Needle That Sings In Her Heart, inspired by the music of Neutral Milk Hotel and the Diary of Anne Frank. Palmer has spent the last year writing a book (based on her recent TED talk “The Art of Asking”), which will be out in November. Her husband, author Neil Gaiman, is also currently teaching writing at Bard.

Steven Bogart is a playwright, stage director, teacher, and visual artist. Directing credits include a new adaptation of Pinocchio at Wheelock Family Theater, Shockheadded Peter with Company One in Boston, Cabaret and The Boston Abolitionist Project at the A.R.T., Ginger Lazarus’s Burning, Dan Hunter’s Legally at Boston Playwrights Theater, and Lunar Labyrinth and Interference with Liars and Believers at Oberon. He has collaborated on projects with Neil Gaiman, James Carroll, Kate Snodgrass, and Amanda Palmer. Bogart’s plays have performed in Boston (Boston Theater Works, Boston Theater Marathon), New York City (Short Play Festival, 2007), and Chicago (Stage Left Theater). He was a 2009 Massachusetts Cultural Council Grant recipient in playwriting, and participated in the Kennedy Center Summer Playwriting Intensive and the Freedom Art Theater Retreat. He is an artist-in-residence at Southern New Hampshire University and adjunct professor for the graduate theater program at Emerson College. As a visual artist, he has exhibited his work nationally and internationally. In a previous life he was a drama teacher at Lexington High School where he taught drama and directed for twenty two years.

A New York based designer for theater and opera, Anya Klepikov’s recent work in opera includes costumes for An American Tragedy (Glimmerglass Festival) and set for Mourning Becomes Electra (Florida Grand Opera). She is a frequent collaborator of director Mike Donahue and most recently, designed costumes for Uncle Vanya with Campbell Scott and Jeanine Serralles at the Weston Playhouse. American Theatre magazine featured her set design for The Glass Menagerie at Triad Stage and she is the winner of Connecticut Critics’s Circle Award for Outstanding Costume Design for A Woman of No Importance atYale Rep. Her previous collaborations with talented Bard students include Little Room With The Bed Too Big by Ann Marie Dorr and Adam Goldman’s web series Whatever This Is. She is a teaching artist with the Roundabout Theater Company and lectures at Princeton University and the Yale School of Drama. She received her B.A. from University of Chicago and M.F.A. from the Yale School of Drama. www.anyaproductiondesign.com

The Bed Show contains nudity, harsh language, and graphic imagery. Suitable for ages 18 and up .Absolutely no minors will be admitted.