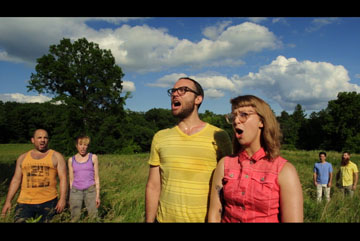 Life and Times - Episodes 7-9 Teaser from Nature Theater of Oklahoma on Vimeo.

“Life and Times is the most ambitious theatrical undertaking of my generation.”
– Time Out New York

Based on the life story of one of Nature Theater of Oklahoma's own company members, Life and Times uses transcripts from 16 hours of recorded telephone interviews as the source for an epic spectacle nearly a decade in the making. Previous episodes have taken the form of opera, dance, theater, animation, and illuminated manuscript. To complete this massive Obie Award–winning event, LAB presents the U.S. premiere of the culminating three parts: episodes seven to nine, films primarily shot on and around the Bard campus in the summer of 2014, which take inspiration from Citizen Kane, French New Wave, early Cinemascope, and gangsta rap videos.

The screening will run approximately five hours with one 30-minute intermission.

Take advantage of free round-trip transportation from Rhinecliff Station to the Fisher Center. The Bard Shuttle will meet the 10:20 am train arriving from New York's Penn Station at noon and will return to Rhinecliff Station in time to meet the 9:01pm train back to NYC.