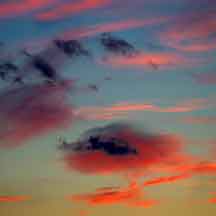 Adrift: Photographs by Carolyn Marks Blackwood, an ongoing exhibit at the Fisher Center

Rhinecliff-based photographer Carolyn Marks Blackwood's Hudson River photographs reframe segments of air, ice and water into vivid color fields, geometric abstractions, and flattened motifs. By removing perspective and context, her unmodified images seize ephemeral moments within everyday occurrences and heighten them into foreign, unfamiliar pictures. These large-scale images are presented in the lobby of the LUMA Theater through February 14, 2016.

“Carolyn Marks Blackwood is a modern day artist for whom the Hudson River is also an unfailing muse. Consumed by her daily photographic study of the water over which her studio is perched—as well as the sky that hovers above it—Blackwood’s images are not the romantic vistas of her predecessors, but almost their opposite: focused close-ups that capture the river’s power through the drama of detail. Instead of coalescing several scenes into one, her photographs are a celebration of the variation a single geographic location can elicit through the constantly changing conditions of wind, light, day, night, temperature and tide.”
—Excerpt from the essay Elements of Place by Carol Diehl