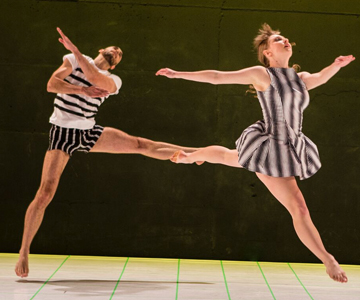 John Jasperse (Choreographer) is a dance artist who has worked in New York City since 1985. Jasperse has created 16 evening-length works for John Jasperse Projects, as well as several commissioned works for other companies, including White Oak Dance Project; Batsheva Dance Company in Tel Aviv, Israel; Lyon Opera Ballet in France; and two co-productions with Ballett Frankfurt and The Forsythe Company in Frankfurt, Germany. His work has been presented in 24 U.S. cities and 29 countries, at festivals and venues including the BAM Harvey Theater; Dance Theater Workshop; Danspace Project; The Joyce Theater; The Kitchen; Performance Space 122; Museum of Contemporary Art, Chicago; On the Boards; Philadelphia Live Arts; the Walker Art Center; the Wexner Center for the Arts,; Yerba Buena Center for the Arts; Festival Montpellier Danse; Dance Umbrella; Centre Georges Pompidou; Kampnagel; Yokohama Dance Collection; and Santiago a Mil, among many others.
Jasperse’s work has received several prestigious awards and fellowships including, most recently, a 2014 Doris Duke Artist Award and a 2014 New York Dance and Performance (“Bessie”) Award for Within between in the category of Outstanding Production. In 2001, Jasperse received his first Bessie Award in recognition of his body of choreographic work. He also received a United States Artists Brooks Hopkins Fellowship in 2011, as well as multiple fellowships over the years from the Foundation for Contemporary Arts, Tides Foundation’s Lambent Fellowship in the Arts, John Simon Guggenheim Memorial Foundation, National Endowment for the Arts, and New York Foundation for the Arts. John Jasperse Projects has been supported by grants from many institutional donors, including The Andrew W. Mellon Foundation, Arts International, Creative Capital Foundation, Dance Magazine Foundation, Greenwall Foundation, Harkness Foundation for Dance, Jerome Foundation, Mary Flagler Cary Charitable Trust, Meet the Composer, Multi-Arts Production Fund, National Endowment for the Arts, National Performance Network, New England Foundation for the Arts National Dance Project, New York Foundation for the Arts, New York State Council on the Arts, and Trust for Mutual Understanding. Jasperse is cofounder of the Center for Performance Research in Brooklyn, N.Y.

John Jasperse’s playful and complex dance explores emptiness and in-between places. With an original score by Jonathan Bepler and performances by four of New York City’s most remarkable modern dancers, Within between earned two Bessie Awards for Outstanding Production and Outstanding Performance.

Within between incorporates a spirit of collaboration. Jasperse has stepped away from his established style to craft something completely new, with choreography created by Jasperse in collaboration with the performers: Maggie Cloud, Simon Courchel, Burr Johnson, and Stuart Singer.

“Within between is a wondrous work, made all the finer by the expertise and expressiveness of all involved. You can’t conveniently liken it to a patchwork quilt or a photo album or a collage. All the memories, styles, and structural ideas have been merged into an intriguingly original work, their diversities absorbed and re-imagined by Jasperse and the very individual performers.”
­– Deborah Jowitt, DanceBeat

"Mr. Jasperse has a keen eye for detail and composition; the subtle internal logic of his choreography tends to drive both sense and sensibility in his dances." – Claudia La Rocco, The New York Times​
Read John Jasperse’s artist statement on the website of the Foundation for Contemporary Arts.
Watch John Jasperse discuss Within between with Ariel Osterweis, the project’s dramaturg, at New York Live Arts.
Read Maya Horowitz’s preview of Within between in Chronogram.
Event Schedule
April 30, 2016 at 7:30 pm
May 1, 2016 at 2 pm