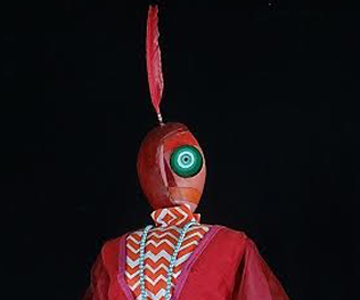 The cast of Demolishing Everything with Amazing Speed in rehearsal at the Fisher Center.
(Credit: Todd Norwood) 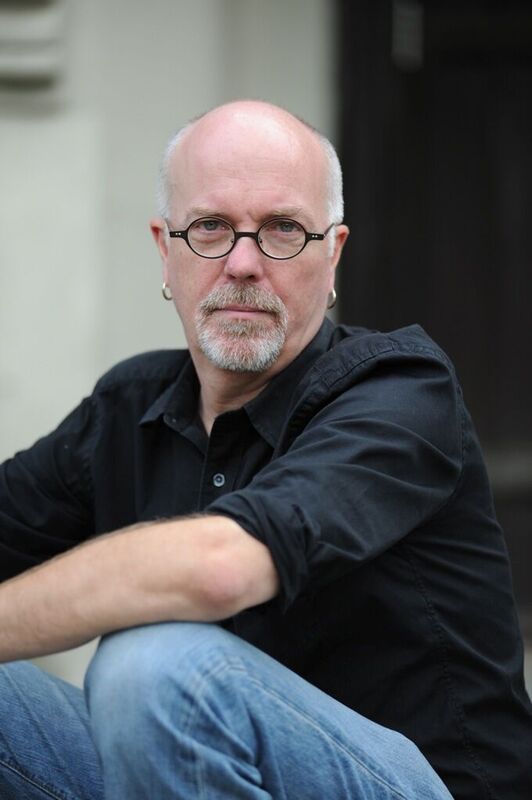 Dan Hurlin received a 1990 Village Voice Obie award for his solo adaptation of Nathanael West's A Cool Million, and in 1998, he was nominated for an American Theater Wing Design award for his music theater piece The Shoulder. His suite of puppet pieces Everyday Uses for Sight: Nos. 3 & 7 (2000) earned him a 2001 New York Dance and Performance award and Hiroshima Maiden, (2006) was given an Obie award for music by Robert Een, as well as a UNIMA-USA Citation for Excellence. Other performance works include The Jazz Section (1989), Constance and Ferdinand (1991), Quintland (1992), No(thing so powerful as) Truth (1995), Disfarmer (2009), and his toy theater piece The Day The Ketchup Turned Blue (1997). Formerly the Artistic Director of Andy’s Summer Playhouse in Wilton, NH, Hurlin is currently the director of the Graduate Program in Theater at Sarah Lawrence College, teaching performance art, dance, and puppetry. In addition to grants from the National Endowment for the Arts, The New York Foundation for the Arts, and Creative Capital, Hurlin is the recipient of fellowships from the John Simon Guggenheim Memorial Foundation in choreography, a USA Artist Fellowship, the Alpert Award for theater, and the 2013 Jesse Howard Jr. Rome Prize for visual art.

I've spent much of my career believing that narrative structures in theater are no longer valid for the contemporary world. The notion of having a "plot," it seems to me, appeals to a centuries-old desire to make order out of chaos. Art has long since given up on that and, in an effort to reflect our times more accurately, has embraced the chaotic, unknowable, immediate, and multifaceted way our lives actually unfold. Yet like a monkey on my back, both my training and love of history keep dragging me back to Aristotelian narrative, representation, and the impulse to tell a story.

Like me, the Italian futurists were dedicated to abstraction in theater without knowing exactly how to achieve it. In Demolishing Everything with Amazing Speed the signifiers of narrative are there—characters, settings, and sequentially developing events—but the narrative logic is outdone by chaos, nonsense, and style. These plays, having been created by a painter/designer (Fortunato Depero), use visual languages, as opposed to the spoken word. Visual impact is employed to eschew reason and correctness, and to embrace non sequitur and impossibility. They are wonderful expressions of a liminal moment during the transition from representation to abstraction in art, which mirrors my own development as an artist. The plays provide a rich opportunity to uncover for myself a new way of making theater that honors my story-telling impulse, while allowing for a more abstract evocation of the madness, violence, and playfulness of the world in which we live today.

In addition to thanking Maria Consagra, Cristina Puglisi, Lake Simons, and Kim Bowes, without whose contribution and help, these performances would be impossible; I would like to gratefully acknowledge the following institutions and individuals:

Into the Darkening Future: Fortunato Depero, from Mussolini to Macy's

It is 1909 and Europe stands at the brink. A new generation in Italy perceives itself as buried in ruins, not a modern state but a museum of antiquities. The world, the rest of Europe included, is passé and inhabited by "passéists" (a favorite word). The future must explode into being: languor must transform into speed, space and time into energy. What will demolish the decaying, inert heap of the Past called the Present? "War—the world’s only hygiene!" proclaims the wealthy novelist, essayist, and connoisseur of fast cars, Filippo Tommaso Marinetti to his fellow futurists.Into the Darkening Future: Fortunato Depero, from Mussolini to Macy’s

It is 1909 and Europe stands at the brink. A new generation in Italy perceives itself as buried in ruins, not a modern state but a museum of antiquities. The world, the rest of Europe included, is passé and inhabited by "passéists" (a favorite word). The future must explode into being: languor must transform into speed, space and time into energy. What will demolish the decaying, inert heap of the Past called the Present? "War—the world’s only hygiene!" proclaims the wealthy novelist, essayist, and connoisseur of fast cars, Filippo Tommaso Marinetti to his fellow futurists.

Marinetti (1876–1944) gave futurism its name in Paris on February 20, 1909, in an editorial on the front page of Le Figaro entitled "The Founding and Manifesto of Futurism." Here are a few demands of his revolution:

"We intend to sing the love of danger, the habit of energy and fearlessness. Courage, audacity, and revolt will be essential elements of our poetry. Up to now literature has exalted a pensive immobility, ecstasy, and sleep. We intend to exalt aggressive action, a feverish insomnia, the racer's stride, the mortal leap, the punch and the slap.

We say that the world's magnificence has been enriched by a new beauty; the beauty of speed. A racing car whose hood is adorned with great pipes, like serpents of explosive breath—a roaring car that seems to ride on grapeshot—is more beautiful than the Victory of Samothrace.

We want to hymn the man at the wheel, who hurls the lance of his spirit across the Earth, along the circle of its orbit.

The poet must spend himself with ardor, splendor, and generosity, to swell the enthusiastic fervor of the primordial elements.

Except in struggle, there is no more beauty. No work without an aggressive character can be a masterpiece. Poetry must be conceived as a violent attack on unknown forces, to reduce and prostrate them before man.

We stand on the last promontory of the centuries! . . . Why should we look back, when what we want is to break down the mysterious doors of the Impossible? Time and Space died yesterday. We already live in the absolute, because we have created eternal, omnipresent speed.

We will glorify war—the world's only hygiene—militarism, patriotism, the destructive gesture of freedom-bringers, beautiful ideas worth dying for, and scorn for woman.

We will destroy the museums, libraries, academies of every kind, will fight moralism, feminism, every opportunistic or utilitarian cowardice.

We will sing of great crowds excited by work, by pleasure, and by riot; we will sing of the multicolored, polyphonic tides of revolution in the modern capitals; we will sing of the vibrant nightly fervor of arsenals and shipyards blazing with violent electric moons; greedy railway stations that devour smoke-plumed serpents; factories hung on clouds by the crooked lines of their smoke; bridges that stride the rivers like giant gymnasts, flashing in the sun with a glitter of knives; adventurous steamers that sniff the horizon; deep-chested locomotives whose wheels paw the tracks like the hooves of enormous steel horses bridled by tubing; and the sleek flight of planes whose propellers chatter in the wind like banners and seem to cheer like an enthusiastic crowd."

World War I would begin eight years later in 1917—a good year for the newly minted futurist, Fortunato Depero.

Depero, a full generation younger than Marinetti, had considered himself a futurist since 1914. Though he was certainly attracted by the bellicosity of the movement, along with its embrace of Mussolini's fascism, he seems most drawn to the flash and clamor of modernism: the advance of technology, the race and glamour of the city, its sophistication and irony. Depero initiated international collaborations and projects to spread the orthodoxy of futurism: Diaghilev and the Ballets Russes, Dadaism, and art deco. He embraced popular art and the folkloric. He was also a prolific writer of prose, poetry, and work for the stage (for instance, puppet shows).

In 1917, just as World War I loomed, Depero conceived perhaps the most comprehensive, extensive expression of his personal version of futurism. That is his Dramma Plastico Futurista (Futurist Plastic Theater), which form the basis of Dan Hurlin's Demolishing Everything with Amazing Speed. In these four short scenarios for puppets, Depero seems to sense the descending darkness that soon engulfed all of Europe, including the war-mongering futurists. These little plays are tragicomedies, violent and funny, Punch and Judy. Modernism from its beginning had a habit of reaching back in order to move forward. Futurists revolted against the romantic realism that dominated the art of their time. It was passé. As futurism moved into the darkening future, it reached back to abandoned forms, often those based in the primitive and folkloric. Italy had an ancient heritage of puppetry. Depero did not abandon his youthful celebration of technological dynamism, but combined his modernism with tradition. He used mechanical forms, simplified, volumetric shapes and bright colors to create elemental, yet exotic shapes.

Depero traveled to New York City in 1928 and worked there until 1931—out of the Jazz Age into the market crash. He opened his Futurist House on West 23rd Street, where he sold, according to his American business card, "paintings, models, wall panels, pillows, interior furnishings, posters, advertising, stage sets." He created designs for Vanity Fair and other major magazines, and also for Macy's and the Roxy Theatre on Broadway. When he returned to Italy in 1931, he expanded the theoretical literature of futurism with his Manifesto of Futurist Advertising. The journey from the radical avant-garde to popular, commercial art, from an experimental puppet show to the world of fashion, may seem surprising at first, but on reflection it is a well traveled, important road.

Here is the closing paragraph of Depero's Manifesto:

"I have seen my own works, on every street corner and every space open for advertising, plagiarized and robbed, more or less intelligently, more or less tastefully—my vivacious colors, my crystalline and mechanical style, my metallic, geometrical, and imaginative flora, fauna, and people, all widely imitated and exploited—this gives me a great deal of pleasure; although I have taken up the art of advertising on a deliberately restricted schedule, I can affirm, without hesitation, that I have managed to create many followers, but I should add that, in this field, I shall have a great deal yet to say—"

—James Leverett, Professor of Dramaturgy and Dramatic Criticism at Yale School of Drama