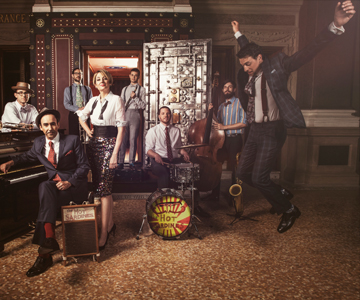 Bandleader Evan "Bibs" Palazzo and lead singer "Miz Elizabeth" Bougerol met in 2007 after they both answered a Craigslist ad about a jazz jam session above a Manhattan noodle shop. The unlikely pair—she was a London School of Economics-educated travel writer who grew up in France, Canada, and the Ivory Coast, he was a New York City born and raised actor who studied theater at the University of the Arts in Philadelphia—bonded over their love for Fats Waller. Influenced also by such greats as Dinah Washington, Louis Armstrong and Billie Holiday, they began playing open mic nights and small gigs and by 2011, they headlined Midsummer Night Swing at New York's Lincoln Center.

The Hot Sardines's self-titled debut album, named by iTunes as one of the best jazz albums of 2014, spent more than a year on the Billboard Jazz Chart, debuting in the top 10 alongside Michael Bublé, Tony Bennett, and Lady Gaga. The accolades began pouring in for the band: Downbeat called The Hot Sardines "one of the most delightfully energetic bands on New York's 'hot' music scene," while the London Times praised their "crisp musicianship" and "immaculate and witty showmanship," declaring them "simply phenomenal."

"We found ourselves in the perfect place at the perfect time," says Evan. "As we explored this 100 year-old jazz, we began to look at it as a journey forward, not so much as a look back. This is music for today, not a museum piece."

Indeed, "People Will Say We're In Love" from the Rodgers & Hammerstein musical Oklahoma! gets reinvented as a tart tango. Jazz standard "Comes Love" starts as a minuet before vocalist Elizabeth, singing in her native French, conjures up spirits from the roaring '20s. The Hot Sardines even upend Robert Palmer's 1985 classic "Addicted To Love" with Elizabeth's cool vocals and hot horn arrangements. Alan Cumming pairs with Elizabeth for a mischievous take on "When I Get Low, I Get High," a song popularized by Ella Fitzgerald. The Emmy-winning actor (The Good Wife) came to mind as Elizabeth, Evan and producer Eli Wolf (Elvis Costello, Al Green, Norah Jones) conceptualized the album. "We wanted to give it a kind of Weimar feel and when I saw Alan in the revival of Cabaret, I knew we had to ask him," she says. "Turns out he was already a fan of the band, and said yes right away. It was so much fun, and a real honor."

The album title celebrates the duality of The Hot Sardines, reflecting both their glamorous and gritty sides. "When we started out as a band, we played illegal parties in these secret spots in Brooklyn. It was pretty down and dirty, and that was one of the reasons we loved it," Elizabeth says. "Cut to a few years later and we were invited to play with the Boston Pops. We came up with the idea of half of the album being elegant and lush with strings, and then the other half is us going back to our roots."

The name is also a reflection of the times, as lines blur between high and low culture, luxury and comfort. "The old rules - that champagne goes with caviar, or couture and takeout don't mix – are out the window. You see it everywhere... fashion, travel, food," says Elizabeth. "Just be yourself and do what you like," adds Evan. "Which is really how the Sardines approach everything we do."

In the hot jazz movement, The Hot Sardines stand apart for the innovation, verve and sheer joy they bring to music, both new and old. "It's a really cool time to be making music," Elizabeth says. "Especially if you're making music that started its life 100 years ago."

Stepping up from their sizzling, sold-out performances in the 2013 and 2014 Spiegeltent seasons, these hot-jazz darlings get into the big, brass-filled spirit of the holiday season for their debut on the Sosnoff stage. For the Holiday Stomp, The Hot Sardines infuse yuletide classics with their unique twist on New York, Paris, and New Orleans jazz from the era of Prohibition and beyond, from beloved chestnuts like "White Christmas" and "Please Come Home for Christmas" to lesser-known gems such as Edith Piaf's “Le Noël de La Rue,” Ella Fitzgerald's “Santa Claus Got Stuck in My Chimney,” and even “The Dance of the Sugar Plum Fairy”—with plenty of surprises along the way.

Have a crowd in town for the holidays? Plan a night out and save 25% off four or more tickets. "Simply phenomenal, crisp musicianship going hand in hand with immaculate and witty showmanship."—Times (London)

Learn more about The Hot Sardines from their website.

Listen to The Hot Sardines on WNYC's Soundcheck.