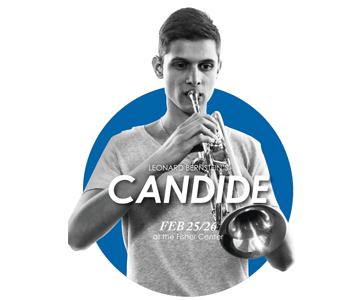 Leonard Bernstein (August 25, 1918 – October 14, 1990) was a world-renowned musician throughout his entire adult life. He served as music director of the New York Philharmonic and conducted the world’s major orchestras, recording hundreds of performances. His books and the televised Young People’s Concerts with the New York Philharmonic established him as a leading educator.

Bernstein's compositions include Jeremiah, The Age of Anxiety, Kaddish, Serenade, Five Anniversaries, Mass, Chichester Psalms, Slava!, Songfest, Divertimento for Orchestra, Missa Brevis, Arias and Barcarolles, Concerto for Orchestra, and A Quiet Place. He also composed for the Broadway musical stage, creating masterpieces such as On the Town, Wonderful Town, Candide, and the immensely popular West Side Story. In addition to the West Side Story collaboration, Bernstein worked with choreographer Jerome Robbins on three major ballets: Fancy Free, Facsimile, and Dybbk. Bernstein was the recipient of many honors, including the Antoinette Perry Tony Award for Distinguished Achievement in the Theater, 11 Emmy awards, the Lifetime Achievement Grammy Award, and the Kennedy Center Honors. James Bagwell maintains an active international schedule as a conductor of choral, operatic, and orchestral music. In 2009, he was appointed music director of the Collegiate Chorale and principal guest conductor of the American Symphony Orchestra, leading them in concerts at Carnegie Hall and Lincoln Center. Bagwell has trained choruses for major American and international orchestras including the San Francisco Symphony, Los Angeles Philharmonic, NHK Symphony (Japan), St. Petersburg Symphony, Budapest Festival Orchestra, American Symphony Orchestra, Cincinnati Symphony Orchestra, Cincinnati Pops Orchestra, and Indianapolis Symphony Orchestra. He has worked with such noted conductors as Zubin Mehta, Riccardo Muti, Lorin Maazel, Esa-Pekka Salonen, Michael Tilson Thomas, Louis Langrée, Leon Botstein, Ivan Fischer, Vladimir Ashkenazy, Raymond Leppard, James Conlon, Jesús López-Cobos, Erich Kunzel, Leon Fleischer, and Robert Shaw. Since 2011, he has collaborated with singer and composer Natalie Merchant, conducting major orchestras such as the San Francisco and Seattle Symphonies. Since 2003, he has been director of choruses for the Bard Music Festival, conducting and preparing choral works during the summer festival at the Fisher Center. He has taught since 2000 at Bard College, where he is director of the Music Program and codirector of the Graduate Conducting Program.

Director Michael Hofman writes “Candide possesses a compositional style that straddles the line between the orchestral complexity and vocal prowess of operatic writing and the tunefulness and wit of American musical theater all while drawing from a broad diversity of European and North and South American musical idioms. Like the story of Candide itself, Bernstein brings you on a journey through musical time and space that all somehow remains very distinctly his own, tongue-in-cheek and winking.”Learn about Candide in this NPR feature.

Listen to an audio sample of Candide at WQXR.