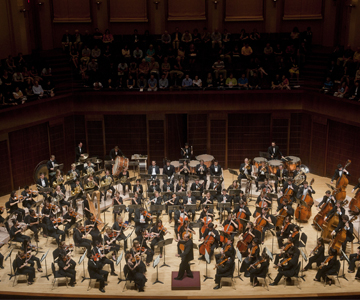 A veteran of the international concert stage, with multiple solo appearances in the Berlin Philharmonie, Carnegie Hall, London’s South Bank, the Sydney Opera House, and the Beijing Concert Hall, Jon Kimura Parker continues to perform to great acclaim. He is an Officer of The Order of Canada, his country’s highest civilian honor. This past May he was also named a Fellow of the Royal Conservatory of Music in Toronto, an honor he shared with singer k.d. lang.

As a founding member of Off the Score, Jon Kimura Parker performed last season with legendary Police drummer Stewart Copeland in a North American tour, including appearances in Ottawa and New York, featuring his own arrangements of music by Prokofiev, Ravel and Stravinsky.
VIEW MORE >>
Devoted to collaborative music, Mr. Parker also tours as a founding member of the Montrose Trio, with violinist Martin Beaver and cellist Clive Greensmith. Last season, the Montrose Trio gave twenty concerts throughout North America, including performing on major series in Philadelphia, New York, Buffalo, Detroit, and Baltimore.

This season, Jon Kimura Parker performs with orchestras in Los Angeles, Toronto, Vancouver and Pittsburgh. He also performs Gershwin’s Rhapsody in Blue with the National Symphony at the Kennedy Center during Presidential Inauguration week.

As a member of the outreach project Piano Plus, Mr. Parker toured remote areas including the Canadian Arctic, performing classical music and rock’n’roll on everything from upright pianos to electronic keyboards. In commemoration of his special performances in war-torn Sarajevo in 1995, he was a featured speaker alongside humanitarians Elie Wiesel and Paul Rusesabagina at the 50th Anniversary of the relief organization AmeriCares. An unusually versatile artist, Mr. Parker has also jammed with Audra McDonald, Bobby McFerrin, Pablo Ziegler, and Doc Severinsen.

His YouTube channel features the Concerto Chat videos, promoting the piano concerto repertoire. Jon Kimura Parker is Professor of Piano at the Shepherd School of Music at Rice University in Houston, and has lectured at The Juilliard School, the Steans Institute, New York University, and Yale University. He is the founding Artistic Advisor of the Orcas Island Chamber Music Festival, where he has given world premieres of new works by Peter Schickele and Jake Heggie.

“Jackie” Parker studied with Edward Parker and Keiko Parker, Lee Kum-Sing at the Vancouver Academy of Music and the University of British Columbia, Marek Jablonski at the Banff Centre, and Adele Marcus at the Juilliard School. He won the Gold Medal at the 1984 Leeds International Piano Competition. He is married to violinist/violist Aloysia Friedmann, and their daughter Sophie is a rapper and visual artist. For further information, please see jonkimuraparker.com, montrosetrio.com and offthescore.com.

Twenty-five seasons ago Larry Rachleff became the Director of Orchestras and the Walter Kris Hubert Chair at Rice University’s Shepherd School of Music. He is also Music Director of the Rhode Island Philharmonic Orchestra and formerly served as Music Director of the San Antonio Symphony. Two recent reviews: “Music Director Larry Rachleff, a superb conductor with seasoned leadership skills who conducts everything with deep musical understanding…” (John von Rhein, Classical music critic, Chicago Tribune) and, from OpusColorado.com, “…make no mistake about it, Rachleff is an incredibly accomplished conductor and an incredibly accomplished musician.”

Mr. Rachleff is a regular guest conductor with the orchestras of Colorado, Utah, Indianapolis, and Kansas City, to name a few.  He recently served as Artistic Advisor for the Grand Rapids Symphony.  His summers are spent guest conducting at the Music Academy of the West, the Aspen Music Festival and School, where Mr. Rachleff has served as guest director of their summer conducting academy, the Sarasota Music Festival, the Chautauqua Music Festival and the Grand Teton Festival. Other summer festival engagements have included Tanglewood, Interlochen, Brevard Music Festival, and Opera Theatre of Lucca, Italy.
VIEW MORE >>
Especially noted for his rich and productive rapport with orchestra musicians, the Salt Lake Deseret News noted about his recent appearance with the Utah Symphony, “His interpretation (of Prokofiev’s Fifth Symphony) was charged with power and passion that never waned. His reading was compelling, yet he also managed to bring out the lyricism that lies hidden beneath the boldness of the themes. What was especially remarkable, he conducted the work from memory.” A former faculty member at the Oberlin Conservatory, where he was Music Director of Orchestras and Conductor of the Contemporary Ensemble, he also served as conductor of the Opera Theatre at the University of Southern California. He has conducted and presented master classes all over the world, including the Chopin Academy in Warsaw, the Zurich Hochschule, the Sydney, Melbourne and Queensland, Australia conservatories, the New England Conservatory, and regularly at the Juilliard School.
​
Larry Rachleff is an enthusiastic advocate of public school music education. He has conducted All-State orchestras and festivals in virtually every state in the United States as well as throughout Europe and Canada. He has also served as principal conducting teacher for the American Symphony Orchestra League, the Conductors’ Guild, and the International Workshop for Conductors held in the Czech Republic and in Sofia, Bulgaria.

As a dedicated advocate of contemporary music, Mr. Rachleff has collaborated with leading composers including Samuel Adler, Luciano Berio, William Bolcom, George Crumb, Michael Daugherty, John Harbison, and the late Gunther Schuller.
He holds an honorary doctorate from Roger Williams University, for which he is very proud. Mr. Rachleff lives in Houston with his wife, soprano Susan Lorette Dunn, and their young son, Sammy.

Earning widespread notice for his richly colored and superbly crafted scores, Pierre Jalbert (b. 1967) has developed a musical language that is engaging, expressive, and deeply personal. Among his many honors are the Rome Prize, the BBC Masterprize, the Chamber Music Society of Lincoln Center's 2007 Stoeger Award, given biennially "in recognition of significant contributions to the chamber music repertory", and a 2010 Academy award from the American Academy of Arts and Letters.

Jalbert has drawn inspiration from a variety of sources, from plainchant melodies to natural phenomena.  His music has been performed worldwide, with four Carnegie Hall performances of his orchestral music, including the Houston Symphony's Carnegie Hall premiere of his orchestral work, big sky, in 2006. Other major works for orchestra include In Aeternam (2000), performed by the London Symphony Orchestra, Symphonia Sacra (2001), written for the California Symphony; Les espaces infinis (2001), written for the Albany Symphony, Chamber Symphony (2004), commissioned by the Los Angeles Chamber Orchestra, Fire and Ice (2007), commissioned for the Oakland East Bay, Marin, and Santa Rosa Symphonies through Meet the Composer Foundation's Magnum Opus Project, Autumn Rhapsody (2008), commissioned by the Vermont Symphony, Shades of Memory (2011) premiered by the Houston Symphony, and Strata (2015) for the Rhode Island Philharmonic.
VIEW MORE >>
Recent orchestral performances include those by the Boston Symphony at Tanglewood and the Cabrillo Festival Orchestra under Marin Alsop.  He has served as Composer-in-Residence with the Los Angeles Chamber Orchestra (2002-2005), California Symphony (1999-2002), and Music in the Loft in Chicago (2003).  Select chamber music commissions and performances include those of the Emerson, Ying, Borromeo, Maia, Enso, Chiara, and Escher String Quartets, violinist Midori, Music from Copland House, the Boston and Philadelphia Chamber Music Societies, and the Chamber Music Society of Lincoln Center.  Recent premieres include From Dusk to Starry Night (2015) for mezzo-soprano Sasha Cooke and the River Oaks Chamber Orchestra, and String Theory (2016) for ECCO (East Coast Chamber Orchestra). Currently, he is working on a violin concerto for a consortium of orchestras and their concertmasters as soloists (Saint Paul Chamber Orchestra, Los Angeles Chamber Orchestra, and the Milwaukee Symphony).

Jalbert is Professor of Music at Rice University's Shepherd School of Music in Houston, and he serves as one of the artistic directors of Musiqa, a Houston-based contemporary chamber ensemble.  His music is published by Schott Music.