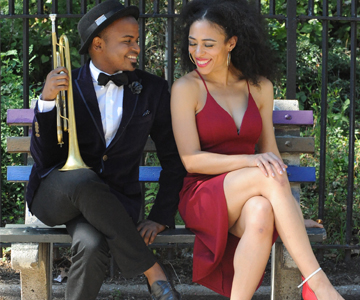 Trumpeter Alphonso Horne is a two-time Grammy-nominated musician and was named by world-renowned trumpeter Wynton Marsalis as one of the rising stars of the next generation. Horne has performed with renowned artists such as Marsalis, Marcus Roberts, Michael Feinstein, and Rihanna and has won many awards, including the National Trumpet Competition. In the August 2011 issue of JET magazine, Marsalis included Horne in “Wynton’s Picks: Who’s Got Next,” a list of 16 young jazz musicians.

In the 2013–14 season, Horne subbed for Marsalis in the Jazz at Lincoln Center Orchestra and appeared with the orchestra in 2013 for its 25th anniversary tour. Horne also performed on Broadway in the 17-piece orchestra for the show After Midnight featuring guest artists Fantasia Barrino, Dule Hill, K. D. Lang, Babyface, and Toni Braxton. Horne has performed as a member of the Count Basie Orchestra and premiered in the Tony-nominated Broadway show Shuffle Along, featuring Savion Glover and Audra McDonald, among others. Horne holds degrees from Florida State University (BM), and the Juilliard School (MM). Candice Hoyes is one of the most thrilling vocalists of her generation, at once classical, lyrical, and soulful. A voice described by Jazziz Magazine as “sublime yet bluesy,” Hoyes is fluid across genres, quickly turning audiences to fans with her melting expressiveness. Multitalented in her own right, she is also a noted published writer, presenter, music educator, and public speaker.

The child of Jamaican immigrants, Hoyes grew up listening to Ella Fitzgerald, Billie Holiday, and Sade at her grandfather’s knee, while studying classical piano and singing in church. She blends her cultural influences to make timeless music. NPR writes: “She’s intentional about making music that reflects the world she lives in as well as sounding great and grooving. . . . Her debut album, On a Turquoise Cloud, showcases Hoyes’s operatic voice and soulful style. It also celebrates the (jazz) genre’s roots.”

On a Turquoise Cloud is her independently released U.S. album, for which she was executive producer. Produced by Ulysses Owens Jr., the album quickly climbed to number 10 on the U.S. jazz charts and defied convention for indie jazz albums when it was selected by SoulTrain as one of the best albums of 2015. Hoyes recalls, “It was outside the box, but I did submit Turquoise Cloud (to Soul Train) just because the soul lineage means so much to me.”

On a Turquoise Cloud features rare songs spanning Duke Ellington’s career with new arrangements and performances by several of this generation’s jazz luminaries. To find these rarities, Hoyes combed the National Archives for Ellington’s manuscripts, then teamed with producer Owens to celebrate the true innovation of Ellington’s music. Many of these songs had been unrecorded since Ellington. Every arrangement on the album was tailor-made for Hoyes by distinguished artists, including the late great Joe Temperley, Ted Nash, and Wycliffe Gordon. She also wrote lyrics for two of the songs. Hoyes reflects, “I deeply identified with Ellington’s view that good music needs no category, and as an artist, it frees you of stereotypes and gives you freedom.”

Her musical ascent has been triumphant if unconventional. Hoyes graduated from Harvard University, where she was a Fitzie Scholar. She studied classical voice on fellowship at Boston Conservatory and performed jazz standards at Boston club venues. After graduation, she was admitted to both Columbia Law School and Westminster Choir College for voice performance on scholarship, completing both degrees. She was chosen for Lorin Maazel’s Castleton Festival for Young Artists in Opera, and graced international opera and concert stages. In 2013, she first performed with Wynton Marsalis for his Abyssinian Mass, a formative artistic turning point for her.

Hoyes has made her musical presence felt around the world. In November 2016, the French network TV 5 Monde, with a global reach of 300 million viewers, broadcast Hoyes performing from her album and a profile of her young life story as part of a documentary on Black American success. She was the featured vocalist on two different programs at Jazz at Lincoln Center: with the Ulysses Owens Jr. Quintet in “Celebrating Ellington and Beyond” and as the five-night run with trumpeter Alphonso Horne. Beyond music venues, Hoyes was invited by TED to give her first TED Salon, a combination of TED Talk and live musical performance on the topic “What Drives Us.” She performed the national anthem introducing Hillary Clinton during her presidential campaign. Hoyes was named in BET’s 2016 “Black Girl Power” feature, and was invited by Google to perform her debut album as part of their 2016 Talks@Google series.

Upcoming and recent engagements include “Jazz Lives Philadelphia, On a Turquoise Cloud Live” presented by North Carolina Opera, Richard B. Fisher Center for the Performing Arts at Bard College, Exit Zero International Jazz Festival, the BET Experience Summer Concert Series in Los Angeles, and Catskill Jazz Factory. She has taught through Jazz at Lincoln Center’s education department and the United Nations International School in New York City, and was a visiting lecturer at University of California at Berkeley, presenting her album. Hoyes is an Earthworks Audio endorsed artist.

More than anything, Hoyes aims to share her music as broadly as possible and its purity has cleared a path for a uniquely fascinating journey. With “one of the finest recordings, jazz or otherwise, of the last several years,” Hoyes has “started her career with a challenge to every other young artist out there” (Irish Film Critic).

Learn more about Hoyes at http://onaturquoisecloud.com.

The rhythms of early jazz and the musical influences of French Impressionism collide in guitarist and composer Django Reinhardt’s Hot Jazz melodies. This innovative evening of music, featuring Alphonso Horne (trumpet) and Candice Hoyes (vocals) will examine the trans-Atlantic interplay between American and French jazz scenes through the music of Reinhardt, who rose to fame in France, then the United States. The evening explores the links among French mélodie, jazz, cabaret, Satie, Debussy, Poulenc, Ellington, Porter, and beyond.