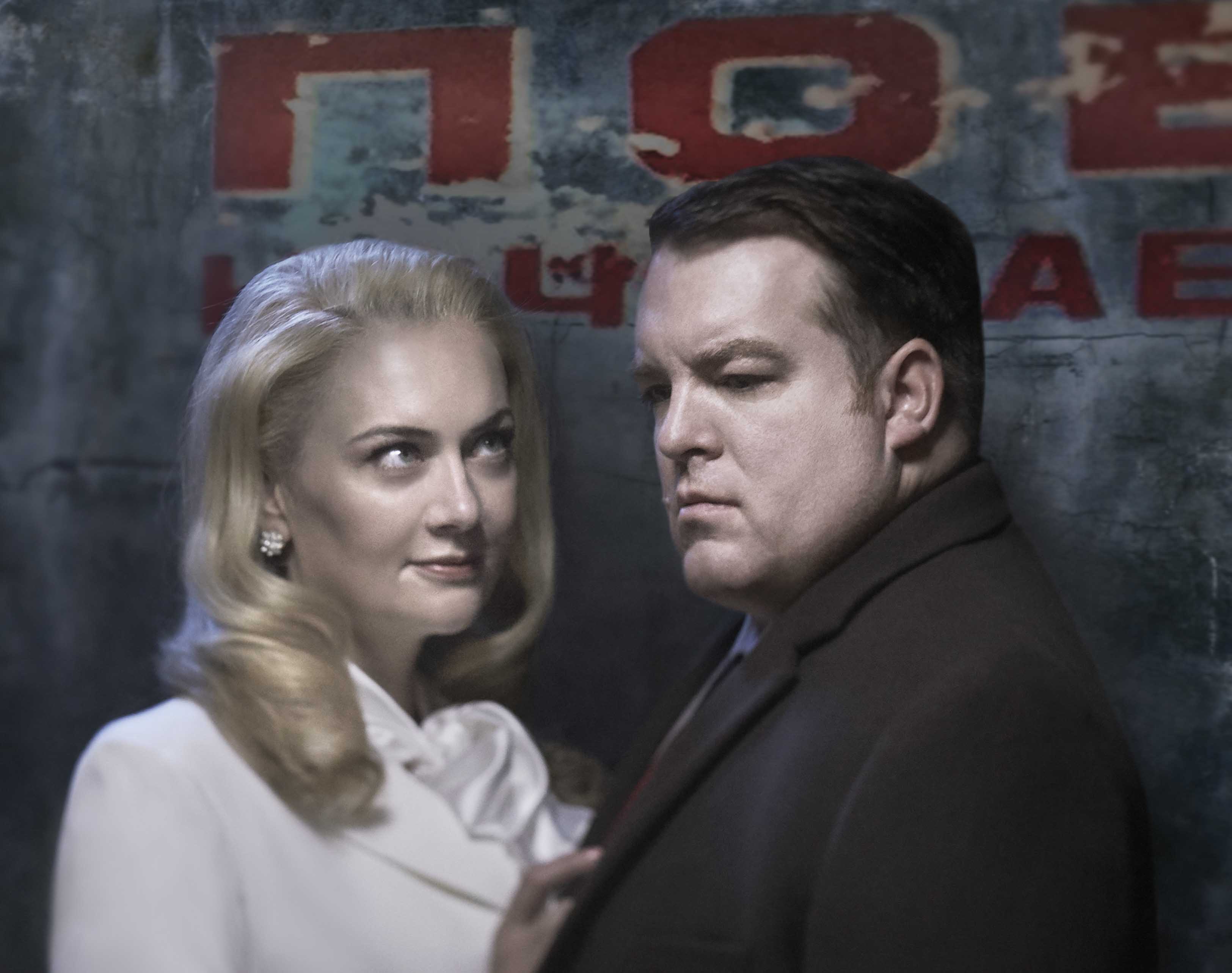 After the death of Boris Godunov in 1605 and before the establishment of the Romanov Dynasty
in 1613, a period of political crisis, civil uprisings, foreign intervention, and famine became the
day-to-day reality in Russia. During this time several pretenders, attempting to seize the throne,
threatened to destroy the state itself and caused major social and economic disruptions.
Tensions were high. Factions were formed and re-formed. Antonín Dvoˇrák set his grand opera
Dimitrij during this turbulent stage that later became known as the “Time of Troubles.”

The story of Dimitrij begins exactly where Modest Mussorgsky’s opera Boris Godunov ends.
As a Czech, Dvoˇrák wrote about nationalism from the point of view of a Czech, which differed
greatly from Mussorgsky’s emotive and hyperpatriotic Russian view of the Time of Troubles.
Dvoˇrák conceived of Dimitrij as an epic historical tableau, unfolding in a spirit of both pathos
and monumentality.

I vividly remember the autumn of 1989 when the Berlin Wall toppled and the world held its
breath for a brief moment while the Eastern Bloc countries suspended political certainty and
were suddenly free to choose their future. Western capitalism was not the inevitable solution
to the abrupt lack of political authority. As the wall separating communist Russia and its
satellites from the West crumbled, no one had any idea what would happen next. In those
remarkable occasions of mass wakefulness, people stood on the Wall’s debris. Anything seemed
possible. Anything could happen. Historically, moments of great upheaval are also fertile soil in
which new ideologies, new paradigms, and even new social systems can be formed.

Following Chopin’s artistic lineage, Bohemia’s Antonín Dvořák (1841–1904) is celebrated as one of the Romantic era’s great Slavic nationalists. Prolific and versatile, his extensive output includes no fewer than twelve operas, including the fairytale Rusalka, which is still in regular rotation at opera houses around the world. By contrast, his grand opera Dimitrij (1882) is rarely staged outside the Czech Republic, and only received its U.S. concert premiere in 1984, more than a century after its composition. Yet the opera was a popular success at its Prague premiere and has long been recognized as an exemplar of Dvořák’s signature lyricism and masterfully stirring choral writing.

Heralded by the Boston Globe as “a tragic story that Shakespeare could hardly have bettered,” Dimitrij continues 17th-century Russian history where Mussorgsky’s Boris Godunov leaves off, vividly depicting the struggle for power during the “Time of Troubles” that ensued in the wake of the Tsar’s death. Mistakenly supposing himself to be Dimitrij, the murdered son of Ivan the Terrible, Dvořák’s protagonist believes he has a legitimate claim to the Russian throne, and leads the Polish army to march on Moscow. When he falls in love with Godunov’s daughter, however, and decides to divorce his own Polish wife, he unwittingly triggers the chain of events that will result in his demise. Ultimately tragic, the story of the False Dimitrij pits Orthodox Russia against Catholic Poland, a conflict Dvořák captures by setting Eastern Orthodox liturgical harmonies against the mazurka’s triple time. Complete with eight-part double choruses of Russians and Poles, the score showcases some of his finest writing, making Dimitrij, as the New York Times writes, “a perfect example of a forgotten opera that deserves to be given exposure.”

Knowing Dimitrij’s absence from the operatic canon, when Bogart first approached the opera, her expectations were low. And yet on closer acquaintance, she found herself unable to account for this omission. She says:

“The more I look at the opera – the architecture of the piece and the absolutely gorgeous music – the more I am completely bewildered why it’s not done all the time, why it’s not a stable part of the repertoire in the opera world.”

About her vision for the upcoming production, she explains:

“For me it was important to set Dimitrij at a time analogous to the “Time of Troubles” in Russia, when the world order had altered and no one knew whether to support or resist the new hegemony. Of course this instability is very familiar and resonant to our own current moment. I could have set our production in the present but instead I opted for the slight distancing of a time reminiscent of 1989 Berlin. Our Dimitrij takes place at the moment in history when Communism had collapsed but it was not yet clear what shape the future might take.”


The libretto for the Bard SummerScape production of Antonín Dvořák's Dimitrij, the critical edition by Czech scholar Milan Pospíšil.

ACT ONE:
After the death of Tsar Boris Godunov, Russia is gripped by uncertainty – who will assume the throne? Boris’s children Fyodor and Xenie, or the one who proclaims himself as Dimitrij, the son of Boris’s predecessor, Ivan the Terrible? The majority take the side of the alleged Dimitrij, under the condition that Ivan’s widow, the tsarina Marfa, recognises him as her son. Dimitrij travels to Moscow with his wife, the Polish woman Marina, and her entourage. Even though Marfa knows that Dimitrij is not who he claims to be, in her desire to avenge her dead son, she publicly recognises him, thus ensuring his ascent to the throne.

ACT TWO:
Preparations for the coronation of Dimitrij and his wife Marina are being made in the Kremlin. Dimitrij wants Marina to become a Russian, both in her appearance and in her heart, but Marina, in turn, tells Dimitrij that he must adopt her customs. Their dispute gains momentum, a group of Russian and Polish noblemen prepare to fight each other, and the skirmish is only prevented by Dimitrij, who threatens punishment for anyone who disturbs the peace.

Dimitrij seeks the solitude of the cemetery where Tsars Ivan and Boris are buried. Here he encounters Xenie, who is being hounded by the Polish nobility. Dimitrij saves Xenie from their assault on her, without betraying to her who he is. When Xenie has gone, Dimitrij hears voices and hides himself in the tomb, from where he hears Shuisky inciting conspirators against him. Dimitrij calls the tsarist guard and has him arrested.

ACT THREE:
Back in the Kremlin, Dimitrij keeps thinking of Xenie; he no longer loves Marina. The latter soon realises this and, fearing that she and the Poles will lose their influence in Russia, she reveals his humble origins. Her uncle had allegedly once taken the child of a Russian fugitive serf into his care and, convinced he was the tsar’s successor, had brought him up intending to use him to gain future control of Russia. Dimitrij is shaken by the knowledge that he is not the person he thought he was, and that Marina only pretended to love him; it was power she craved.

ACT FOUR:
In Shuisky’s house Xenie laments her love for a person who laid claim to the tsarist throne through dishonest means. She feels he is tainted and that she must reject him. Dimitrij then finds her there - they proclaim their love for each other but she ends by renouncing him. She is then murdered by accomplices of Marina's.
Filled with remorse for the murder, Marina publicly exposes Dimitrij as an imposter and the people again force Marfa to swear that he is her son. After much hesitation, she consents. Before she can say another word, Dimitrij stops her and confesses that he is not her son. He is then shot by Shuisky.

Acclaimed at its 1882 premiere for its strong dramatic moments, original melodies, and masterful choral writing, Antonín Dvořák's Dimitrij was widely regarded as one of the most significant works created for the Czech operatic stage. Based on events of 17th-century Russia, Dimitrij resumes where Mussorgsky's Boris Godunov leaves off—vividly depicting the uncertainty, tribal loyalties, and struggles for power in the wake of the revered tsar's death.

Performed in Czech with English supertitles.

This performance is approximately 3 hours and 50 minutes including two 20-minute intermissions. Opera talk with Leon Botstein on Sunday, July 30 at noon

Coach transportation from New York City is available for performances on Friday, July 28, Sunday, July 30, and Sunday, August 6; packages are available.
Click here to learn more."A tragic story that Shakespeare could hardly have bettered"—The Boston GlobeSpecial support for this program is provided by Emily H. Fisher and John Alexander.