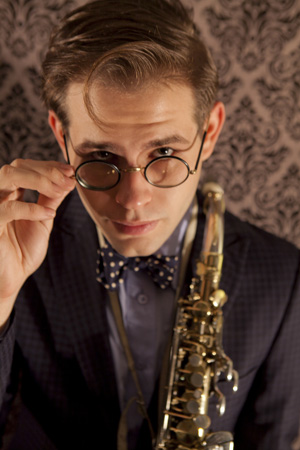 A retrospective of 1950's West Coast jazz, where the frenetic sounds of bebop met the laid-back cool of sun and surf in the Golden Age of Hollywood.

Commissioned by the Catskill Jazz Factory, Hollywood & Vine features Aaron Johnson (performing on saxophone, clarinet and flute) and rising vocalist Veronica Swift, backed by an ensemble comprised of a "who's who" of rising players on the New York jazz scene.

At a time when the union of jazz and popular music created new commercial and cinematic possibilities, Los Angeles was a hotbed for these new sounds with releases from the likes of Capitol, Pacific Jazz, and Contemporary Records.

Johnson leads this night with a fresh look at time-tested favorites as well as less recognized gems, drawing from the repertoire of legendary figures such as June Christy and Bob Cooper, Stan Kenton, Julie London, Buddy Collette, Shorty Rogers, and the Lighthouse All-Stars.

Location
This event has passed.