RAPTURE: Site-Specific Dance by Noémie Lafrance at the Fisher Center 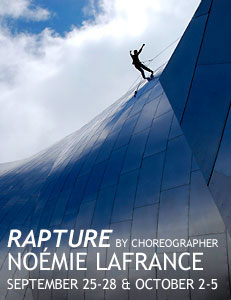 ANNANDALE-ON-HUDSON, N.Y. – This fall, site-specific choreographer Noémie Lafrance will premiere Rapture on the exterior surface of the Richard B. Fisher Center for the Performing Arts at Bard College, designed by Frank Gehry and located on the college’s Mid-Hudson Valley, N.Y. campus.

Celebrating the architecture of Frank Gehry, Rapture is a site-specific work featuring dancers suspended in mid-air, traveling across the entire surface of the building, utilizing a custom lateral rigging system. Commissioned by the Fisher Center, Rapture invites the audience to the foot of the building to view a dance performance staged on the outside of the fluid structure.

With this new work, Lafrance visually and conceptually challenges the scale of the human body against the scale of the architecture, staging dancers on the vertical plane. Based on concepts of repetition, evolution and accumulation, the choreography creates an orchestration of rhythms and patterns in response to topography. Rapture captures the dynamic architecture in movement. Following the premiere of Rapture at the Fisher Center, Lafrance’s latest ambition is to self-produce a series of performances staging Gehry’s architecture worldwide.

Dancers include Gary Lai, Kevin O’Connor, Corey Harrower, Chelsea O’Brian, Heather Hammond and Jeffrey Lyon. Rapture will use an innovative kinetic rigging approach that is retrofitted to the existing architecture of the building. To design the system Lafrance is working with head rigger Sean Riley of Gravity Design, who also stars in the upcoming National Geographic television series “The Big Fix”. The original electronic score is by German composer Janek Schaefer, to be played along with performers from the Bard College Conservatory. Site-specific lighting by long-time collaborator Thomas Dunn illuminates the building and dancers dressed in reflective costumes designed by Mary Grusak.
SENS | Noémie Lafrance

Site-specific choreographer Noémie Lafrance was named the “uncrowned Queen of site-specific work” [Village Voice]and is best known for having reopened the historic McCarren Park Pool in Brooklyn with her ambitious works Agora & Agora II (2005-06) and for the choreography of Grammy Award-nominated FEIST “1234” Video. Previous works include Noir(2004),part of the Whitney Biennial, staged in the Essex Municipal Parking Garage, and 2-time Bessie Award winning Descent(2001-2003), performed in the stairwell of the New York City Court Building Clock Tower. SENS | Noémie Lafrance is an award winning non-profit experimental arts organization founded by Ms. Lafrance in 2001. SENS’ mission is to create and produce innovative site-specific dance performances that both engage audiences in spatial participation and explore the dynamic of movement in public spaces by integrating choreography into urban architecture.

The premiere of the Rapture has been commissioned by The Richard B. Fisher Center for the Performing Arts at Bard College and is produced by SENS | Noémie Lafrance.

Rapture is made possible, in part, by public funds from The New York State Council on the Arts, the National Endowment for the Arts, the Canada Council for the Arts, the Mid-Atlantic Arts Foundation and the Quebec Government House in New York, and many private foundations and individuals.