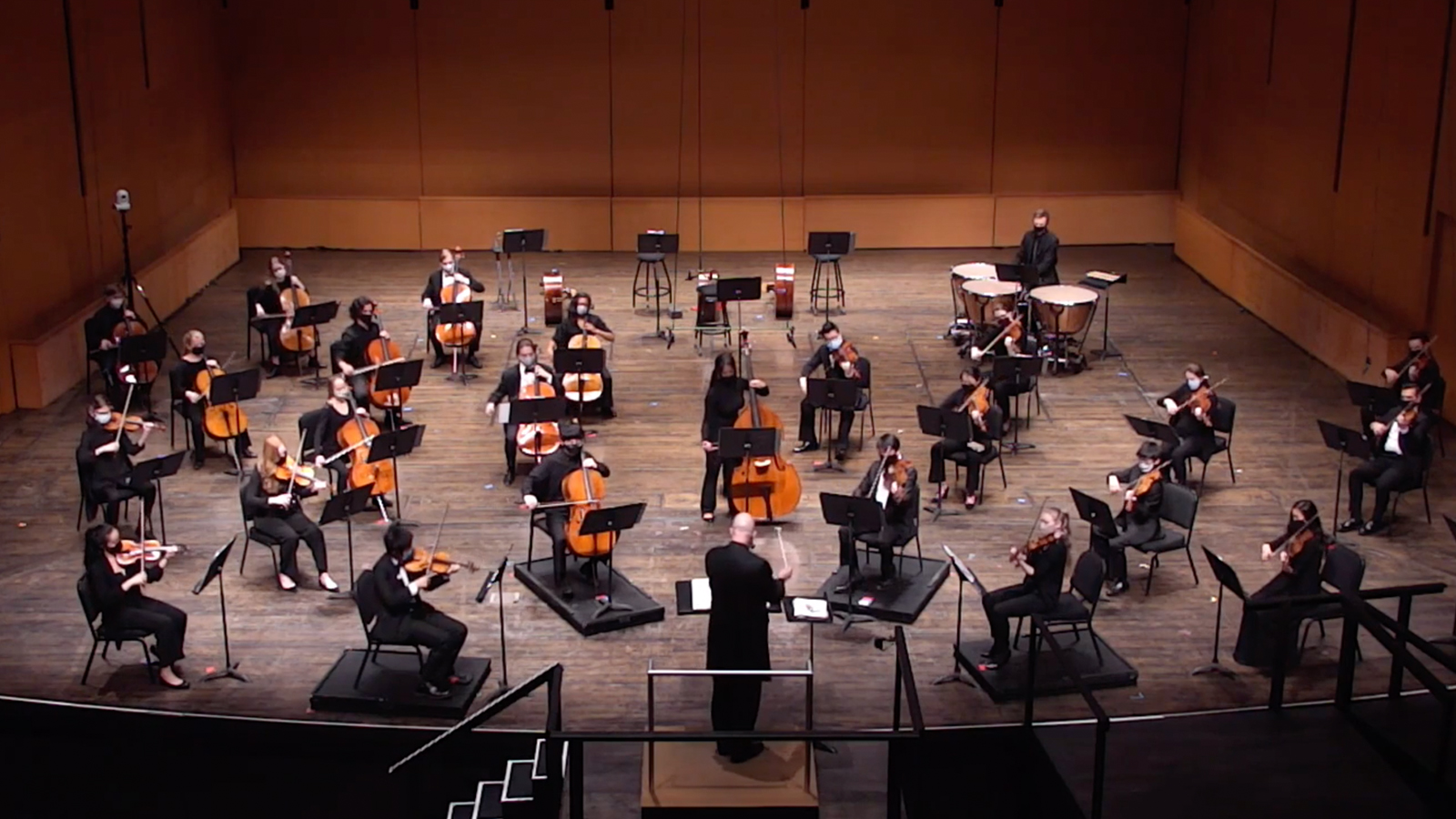 Continuing its commitment to bring the world’s boldest artists and most exciting projects to audiences beyond the walls of our building, the Fisher Center at Bard announces its spring 2021 season of music and performance. The Fisher Center’s virtual stage, UPSTREAMING, extends its programming into the new year with As Far As Isolation Goes (Online), an interactive, one-on-one performance from live artist Tania El Khoury, cocurator of last season’s Live Arts Bard Biennial, and the new director of the OSUN Center for Human Rights and the Arts, based at Bard; The Future Is Present, a project intended to model community building with a focus on intimacy and discourse; as well as streamed concerts from The Orchestra Now and the Bard Conservatory College Orchestra; The Sound of Spring, a Chinese New Year celebration, from the US-China Music Institute, and a recital of French music with Piers Lane and Danny Driver, commissioned by the Bard Music Festival.

All events are available on UPSTREAMING, the Fisher Center’s virtual stage, adding to an already robust selection of archival HD opera recordings and contextual materials.

THE FUTURE IS PRESENT

In late 2020, artists Charlotte Brathwaite, Justin Hicks, Janani Balasubramanian, Sunder Ganglani, June Cross, and Alyssa Simmons initiated The Future Is Present: A Casting the Vote Project, a high-impact, liberatory media project. Across seven weeks, a small community of Black and Indigenous young artists/activists and a small community of young artists from Bard College (Adrian Costa, Megan Lacy, Cam Orr, Anya Petkovich, Taty Rozetta, Hakima SmithStone, Dani Wilder, and Mengchen Zhang) virtually cultivated intimacy and discourse. Over the course of these weeks, the youth cohort created demands on our collective future; now a process of amplifying those demands is underway. Using the youth cohort’s words to inspire scenes, animations, and other moving-image fragments, the Bard artists created a film for the youth cohort, to be released in February, as part of an ongoing collaborative process.

An introductory video, released on UPSTREAMING following the 2021 presidential inauguration, is an invitation for people to participate on terms that make sense in their communities.

AS FAR AS ISOLATION GOES (ONLINE)

An online, interactive, one-on-one performance brings audience members into contact with people experiencing inhumane detention centers and a mental health system that disregards their political and emotional humanity. A collaboration between live artist Tania El Khoury and musician and street artist Basel Zaraa, and reimagined for an online context during the coronavirus lockdown, the piece builds on an earlier collaboration, As Far As My Fingertips Take Me, in which El Khoury commissioned Zaraa to record a rap song inspired by the journey his sisters made from Damascus to Sweden.

In As Far As Isolation Goes, Zaraa and El Khoury worked together to create another iteration of their previous piece focused on the mental and physical health experiences of refugees in the United Kingdom. Zaraa created a song inspired by conversations with friends and colleagues who have recently claimed refuge in the UK.

The Orchestra Now’s 2021 Season features livestreamed virtual concerts including a world premiere by Sarah Hennies, visiting assistant professor of music at Bard; Popcorn Superhet Receiver by Jonny Greenwood (Radiohead); Maestro Leon Botstein conducting Schoenberg and Bach; and more. All concerts, which are livestreamed from the Sosnoff Theater at the Fisher Center at Bard, are free, but reservations are required.

This concert features the world premiere of a new work by composer Sarah Hennies, visiting assistant professor of music at Bard; and the 2005 piece Popcorn Superhet Receiver by Radiohead guitarist Jonny Greenwood, which was used in the film There Will Be Blood. The program also includes Edvard Grieg’s classic Holberg Suite and a popular work by Vaughan Williams.

Ralph Vaughan Williams Fantasia on a Theme by Thomas Tallis

TŌN Assistant Conductor Andrés Rivas leads this March concert by The Orchestra Now, livestreamed online for free from the Sosnoff Theater at the Fisher Center at Bard. Music on the program will be announced in the weeks preceding the concert.

TŌN Resident Conductor Zachary Schwartzman leads this March concert by The Orchestra Now, livestreamed online for free from the Sosnoff Theater at the Fisher Center at Bard. Music on the program will be announced in the weeks preceding the concert.

AN APRIL CONCERT WITH LEON BOTSTEIN

TŌN Music Director Leon Botstein leads this April concert by The Orchestra Now, livestreamed online for free from the Sosnoff Theater at the Fisher Center at Bard. Music on the program will be announced in the weeks preceding the concert.

A MAY CONCERT WITH LEON BOTSTEIN

TŌN Music Director Leon Botstein leads this May concert by The Orchestra Now, livestreamed online for free from the Sosnoff Theater at the Fisher Center at Bard. Music on the program will be announced in the weeks preceding the concert.

THE SOUND OF SPRING

A concert of symphonic music to celebrate the Lunar New Year, featuring a new performance by The Orchestra Now conducted by Jindong Cai, along with performances from orchestras in Asia including the China NCPA Orchestra and the Hong Kong Chinese Orchestra.

This year’s concert will carry a message of hope, renewal, and new beginnings, in the spirit of the Chinese New Year tradition of the spring festival.

Livestreamed from the Sosnoff Theater

About UPSTREAMING, the Fisher Center’s virtual stage, Archival Discoveries, and New Commissions for the Digital Sphere

UPSTREAMING broadens the Fisher Center’s commitment to reaching audiences far beyond the physical walls of our building, and offers new ways for us to engage with artists. Launched in April 2020, UPSTREAMING has released new content, including digital commissions, virtual events, and beloved performances and rich contextual materials from the archives of the SummerScape Opera, as well as Bard Music Festival’s 30-year history. UPSTREAMING highlights different aspects of the breadth of programming the Fisher Center offers. New releases are announced via the Fisher Center’s weekly newsletter. To receive those updates and stay connected to UPSTREAMING, join the mailing list here.

ABOUT THE FISHER CENTER AT BARD

The Fisher Center at Bard develops, produces, and presents performing arts across disciplines through new productions and context-rich programs that challenge and inspire. As a premier professional performing arts center and a hub for research and education, the Fisher Center supports artists, students, and audiences in the development and examination of artistic ideas, offering perspectives from the past and present, as well as visions of the future. The Fisher Center demonstrates Bard’s commitment to the performing arts as a cultural and educational necessity. Home is the Fisher Center for the Performing Arts, designed by Frank Gehry and located on the campus of Bard College in New York’s Hudson Valley. The Fisher Center offers outstanding programs to many communities, including the students and faculty of Bard College, and audiences in the Hudson Valley, New York City, across the country, and around the world. Building on a 160-year history as a competitive and innovative undergraduate institution, Bard is committed to enriching culture, public life, and democratic discourse by training tomorrow’s thought leaders.