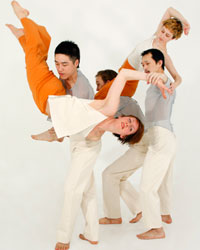 ANNANDALE-ON-HUDSON, N.Y. – The eighth annual Bard SummerScape festival opens on Thursday, July 8 at 8 pm with the first of four performances by the Trisha Brown Dance Company, comprising one of the trailblazing choreographer’s newest dances – L’Amour au théâtre (2009), two of her legendary Rauschenberg collaborations – Foray Forêt (1990) and You can see us (1995), and a duet from her 1996 piece, Twelve Ton Rose, which features the music of Anton Webern. The performances – a highlight of the company’s 40th anniversary season – will take place in the Frank Gehry-designed Richard B. Fisher Center for the Performing Arts on Bard College’s stunning Hudson River campus. Three additional performances are on July 9 and 10, also at 8 pm, and on Sunday, July 11 at 3 pm. The July 10 performance is a gala benefit for SummerScape. For tickets and more information go to fishercenter.bard.edu/summerscape.

A significant dance performance has opened SummerScape each year since 2005. As in previous seasons, SummerScape 2010 is keyed to the theme of the Bard Music Festival, which this year celebrates “Berg and His World.” Like the great Austrian composer, Trisha Brown is a pioneer of her art; where Berg is one of musical modernism’s founding fathers, she has long been recognized as “the innovative high priestess of postmodernist dance” (Jennifer Dunning, New York Times).  Since helping to found the avant-garde Judson Dance Theater movement in the 1960s, Brown has consistently shattered perceptions of what dance can be. She was awarded a coveted MacArthur Foundation “genius” grant in 1991, becoming the first female choreographer to be so honored.

It was 30 years earlier, when she joined Robert Dunn’s class at the Merce Cunningham studio, that Trisha Brown encountered the philosophy of experimentalist composer John Cage, which profoundly resonated with her. As one of the Judson Dance Theater movement’s original members, Brown contributed to the birth of postmodern dance, while the Trisha Brown Dance Company, which she formed in SoHo in 1970, soon became one of the nation’s foremost contemporary dance

ensembles. Indeed, four decades on, the company continues to command heartfelt respect; the New York Times’s Alastair Macauley recently deemed it “invariably sensuous, characterized by inventive wit, and often uncommonly interesting,” while critical juggernaut John Rockwell wrote: “Her current company is wonderful: handsome dancers confident in their execution of Ms. Brown’s choreography. They’re a pleasure to watch, all by themselves. But they're not by themselves; Ms. Brown’s ideas and sensibility are ever present.”

Trisha Brown’s work with artists in other genres – including visual artist Robert Rauschenberg, who designed costumes and sets and wrote music for her pieces – has resulted in some of the most compelling performances of the postmodern era.  Following celebrated opera productions in Brussels, London, Paris, Aix-en-Provence, and New York City, the visionary experimentalist brings to SummerScape her most recent dance, L’Amour au théâtre (2009), with two of her famous Rauschenberg collaborations – Foray Forêt (1990) and You can see us (1995) – and an excerpt from her 1996 piece, Twelve Ton Rose.  This last features the spare and yet unsparing chamber music of Anton Webern, who was, like Berg, a member of Schoenberg’s circle.

Foray Forêt, which premiered at the Lyon Biennale de la Danse in 1990, remains one of the more requested works in the Trisha Brown Dance Company’s repertory. It represents the beginning of Brown’s elegant and mysterious Back to Zero cycle, in which she pulled back from external virtuosity to investigate unconscious movement. As Anna Kisselgoff explained after the premiere, “In speaking of Foray Forêt,…Ms. Brown use[d] words about movement that [were] new for her: subtle, soft, minute, and delicacies. … Such shifts are typical for a choreographer interested in “a foray into forms” (New York Times). The 28-minute dance features nine dancers accompanied by the music of a marching band that is engaged locally at each performance venue to play John Philip Sousa marches outside the theater walls.

With John Cage and Merce Cunningham, Robert Rauschenberg helped launch an artistic revolution.  For Foray Forêt, he designed both the set, with its open stage and clouded backdrop, and the golden costumes, which evoke the unseen brass instruments heard offstage. According to dance critic and historian Deborah Jowitt, “Now-you-see-it-now-you-don’t has been an element of Brown’s style since the mid-’70s. In Foray Forêt…the dancers flash on and off the stage, and Rauschenberg’s gleaming gold and silver costumes and Tipton’s lighting enhance the image of sunlight tampered with by windblown trees. The nine performers are amazing – deerlike in their alertness, speed, and sensitivity, yet always serene. Our eyes have to move to capture their fleet transactions” (Village Voice).

Trisha Brown reveals new facets of her experimentalism in the duet You can see us, the second of her Rauschenberg collaborations to air at SummerScape. The piece is a reworking of a 1994 solo that she originally performed herself, and it was Brown – “one of America’s most remarkable dancers” (Alastair Macaulay, New York Times) – who premiered You can see us with Bill T. Jones at the 1995 Montpellier Festival de Danse, before teaming up with Mikhail Baryshnikov to dance its New York premiere the following year. As in the solo version, the two dancers perform with their backs to the audience. Restricted from showing their faces, they must rely on the suppleness of their torsos and limbs for personal expression, while Rauschenberg’s costume design and atmospheric sound score contribute to the piece’s seductive beauty. As the New York Times’s Gia Kourlas recently attested, the work has more than stood the test of time: “the duet remains a virtuosic exploration of presence and expression. … Stepping back in time with [Brown’s] art is a wild ride, not just because of how the work has held up, but also because of how wittily relevant it remains.”

The complete version of Twelve Ton Rose premiered in France in 1996, with a cast of six, dressed in flowing, pajama-like costumes by New York video artist Burt Barr, so as to accentuate their swirling, sensual movements. Brown choreographed the dance to the music of Anton Webern: Five Movements for string quartet, Op. 5; Four Pieces for violin and piano, Op. 7; and String Quartet, Op. 28. While only the last of these employs the twelve-tone technique to which Brown’s title punningly alludes, all three are atonal, dissonant, and challenging for many listeners, even so long after their composition. Webern’s writing is characterized by its poetic intensity and background of silence, from which sound emerges only in fleeting bursts. Brown perceived this as an opportunity, finding that the music “provide[d] such a freewheeling space that you [could] do so much more and be relevant.” In Dance Magazine, Deborah Jowitt reported that the radical choreographer was especially “thrilled about a particular quartet in which dancers, sharing the same steps but each keyed to a different instrument, move only when their instrument falls silent – ‘in the negative spaces of the music.’” As Jowitt suggests, perhaps “in his grave, Webern cut an assenting caper.” The excerpted duet is from Webern’s Four Pieces for Violin and Piano, Op. 7.

Brown’s most recent composition, L’Amour au théâtre – like Twelve Ton Rose – marks one of the rare occasions on which the choreographer chose to work with a pre-existing score, in this case selections from Hippolyte et Aricie, the operatic debut of leading French Baroque composer Jean-Philippe Rameau. However, as Jowitt explained after the dance’s 2009 world premiere at the Brooklyn Academy of Music,

“Brown doesn't venture into plot. Instead, she riffs off dance forms like passepieds, gavottes, and rigaudons, alluding very occasionally to the words of the arias. Wearing [Elizabeth] Cannon’s draped white tops and orange pants (the women), or gray tops and white pants (the men), the eight dancers slip silkily into duets, trios, quartets, and so on that are rife with invention. Movement patterns unspool out of nowhere, overlap, elide, echo, transform. We’re watching a peaceful, resourceful society at play…in which complexity keeps resolving in endless delight” (Village Voice).

In his review of the premiere, Alastair Macaulay paid tribute to “Ms. Brown’s characteristic wit” and “always appealing supply of inventive movement [from which] most choreographers in the world could get ideas,” before reporting approvingly that “the BAM audience gave [her] a deserved ovation” (New York Times). For Leigh Witchel of the New York Post, the work represents an arrival point in Brown’s career; he concludes that, “from the calligraphic elegance of the backdrop [designed by the choreographer herself] to the clean and buoyant choreography, Brown has transformed herself from a downtown artist to a big-ticket presence.”

Set, costumes, and lighting (with Spencer Brown) by Robert Rauschenberg

Music and costumes by Robert Rauschenberg

Special Coach Transportation: Round-trip coach transportation from Columbus Circle in New York City to Bard’s Fisher Center will be provided for the opening-night performance on Thursday, July 8. To make a reservation on the round-trip coach provided exclusively to ticket holders, call the box office at 845-758-7900.  The fare is $20 round-trip, and reservations are required. The coach departs from Columbus Circle four hours before scheduled curtain time to allow for dining in the Spiegeltent or a pre-performance visit to Bard’s Hessel Museum.

This tour engagement of Trisha Brown Dance Company is funded through the “American Masterpieces” programs of the Mid-Atlantic Arts Foundation, in partnership with the National Endowment for the Arts’ “American Masterpieces: Three Centuries of Artistic Genius,” a major initiative to acquaint Americans with the best of their cultural and artistic legacy.

The Bard SummerScape Festival is made possible through the generous support of the Advisory Boards of the Richard B. Fisher Center for the Performing Arts and the Bard Music Festival, and the Friends of the Fisher Center.

For tickets and further information on all SummerScape events, call the Fisher Center box office at 845-758-7900 or visit www.fishercenter.bard.edu.

All program information is subject to change.