The Conservatory Orchestra Performs with Pianist Jeremy Denk at the Fisher Center on Sunday, December 4 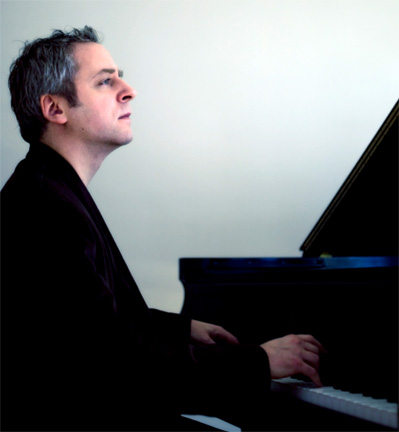 ANNANDALE-ON-HUDSON, N.Y.— The Bard College Conservatory of Music presents the Conservatory Orchestra in a matinee concert at the Richard B. Fisher Center for the Performing Arts’s Sosnoff Theater. Conducted by music director Leon Botstein and featuring guest soloist Jeremy Denk, piano, the Conservatory Orchestra will perform Charles Ives’s “Decoration Day” and “Fourth of July” from A Symphony: New England Holidays; Beethoven’s Piano Concerto No. 3 in C Minor, Op. 37; and Mahler’s Symphony No. 5. The concert takes place on Sunday, December 4 at 3 p.m. Proceeds from the concert series benefit the Scholarship Fund of The Bard College Conservatory of Music. Suggested donations are $20 (orchestra seating) and $15 (parterre/first balcony). The minimum donation for orchestra seating is $5. Seating location for tickets reserved without a donation will be assigned by the Box Office. For ticket information, contact the Fisher Center box office at fishercenter.bard.edu or call 845-758-7900.

“Mr. Denk, clearly, is a pianist you want to hear no matter what he performs, in whatever combination — both for his penetrating intellectual engagement with the music and for the generosity of his playing.” – New York Times

American pianist Jeremy Denk has steadily built a reputation as one of today’s most compelling and persuasive artists with an unusually broad repertoire. His debut solo album, Jeremy Denk Plays Ives, garnered praise from the nation’s most trusted and influential media, including the New Yorker, New York Times, Boston Globe, and Washington Post. According to New York magazine, in which the disc was the only recording to make the “Year in Classical Music” top-ten list, “Denk’s balance of passion and precision makes [the “Concord” Sonata’s] strange beauty come suddenly clear, without losing any of its improvisational radicalism.”

Denk has appeared as soloist with many major orchestras, including the Atlanta, Dallas, Houston, New World, St. Louis, and San Francisco symphonies; the Philadelphia Orchestra; Orchestra of St. Luke’s; Orpheus Chamber Orchestra; and London Philharmonic. Last season he played concertos by Beethoven, Copland, Mozart, Schumann, and Stravinsky, whose Concerto for Piano and Wind Instruments he performed under the direction of John Adams, first with the London Symphony Orchestra in London and Paris, and then as part of Carnegie Hall’s City Noir. The New York Times describes Denk’s playing as “bracing, effortlessly virtuosic, and utterly joyous,” and reviewers frequently comment on the freshness and originality of his musical interpretations. “Mr. Denk is the ideal interpreter for music that defies easy classification,” wrote the Richmond Times; the New York Sun called his “Waldstein” Sonata “a radical take on a revolutionary work”; and the Washington Post referred to his “brilliant playing at the edge of Schumann’s sanity.” After graduating from Oberlin College and Conservatory in piano and chemistry, Denk earned a master’s degree in music from Indiana University as a pupil of György Sebök, and a doctorate in piano performance from The Juilliard School, where he worked with Herbert Stessin. Denk is on the piano faculty of The Bard College Conservatory of Music. Denk’s website and blog are at jeremydenk.net.

The mission of The Bard College Conservatory of Music is to provide the best possible preparation for a person dedicated to a life immersed in the creation and performance of music. The Conservatory features a unique double-degree program in which all undergraduate Conservatory students receive a bachelor of music and a bachelor of arts in another field. In addition, the Conservatory offers a graduate program in vocal arts, led by renowned soprano Dawn Upshaw; graduate programs in orchestral and choral conducting, codirected by James Bagwell, Leon Botstein, and Harold Farberman; a postgraduate Collaborative Piano Fellowship, directed by Frank Corliss; and a Preparatory Division for students ages 3–18.

For more information about additional events, including concerts and master classes, go to www.bard.edu/conservatory.

and scroll down to click on the photo link for “BARD COLLEGE CONSERVATORY.”