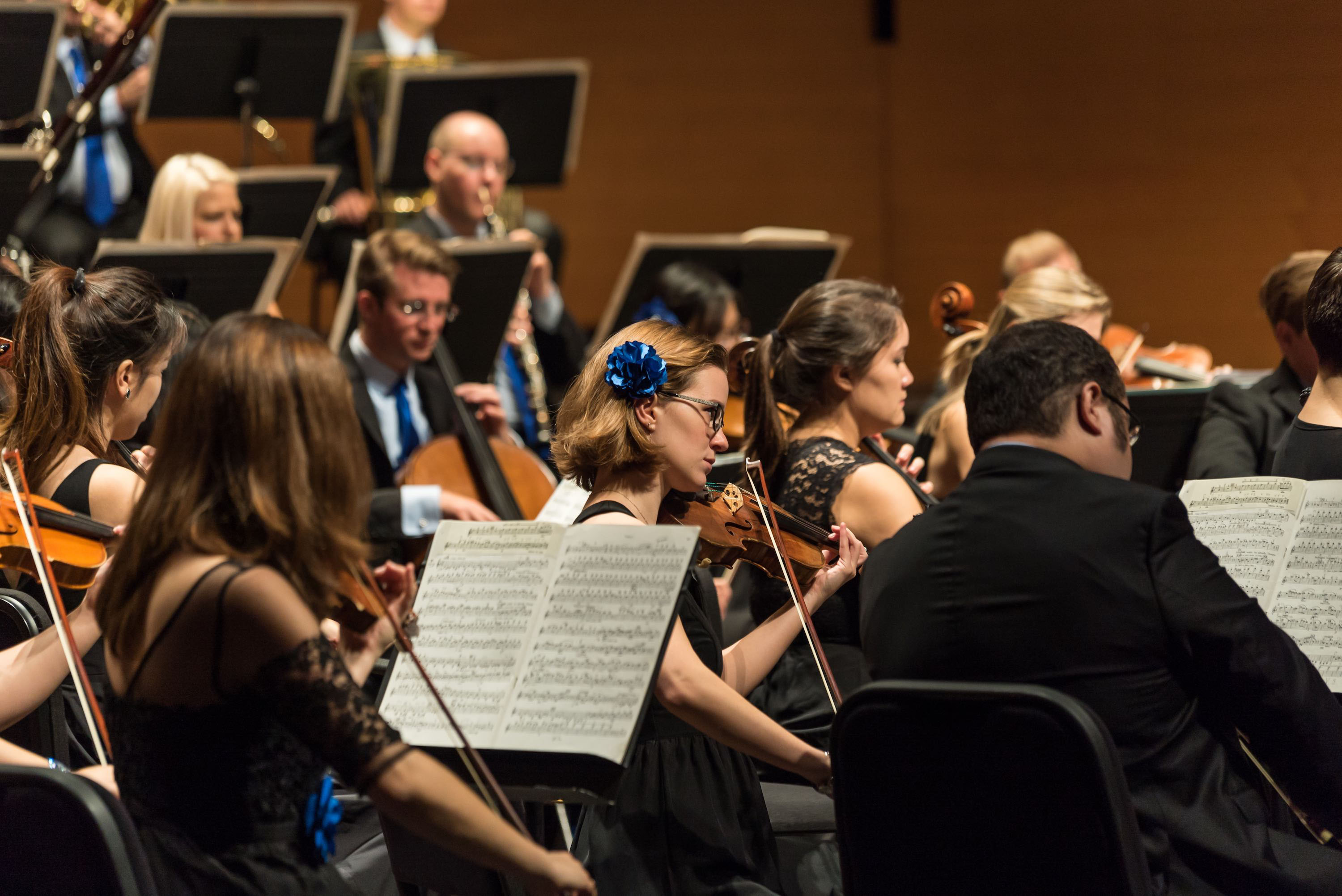 Image Credit: Matt Dine
Annandale-on-Hudson, New York, January 22, 2019  – The Orchestra Now (TŌN) continues its six-concert season at the Fisher Center with three different programs led by TŌN’s music director, Leon Botstein, on Feb. 9-10, Apr. 6-7, and Apr. 27-28. The first program bursts with passion centering around the theme, The Romantic Hero (Feb. 9-10). Opening with Wagner’s vigorous Siegfried’s Rhine Journey from Götterdämmerung, the Orchestra sets the stage by performing one of the opening pieces of Götterdämmerung (“Twilight of the Gods”), which in whole portrays the end of the world. Götterdämmerung is the last of Wagner’s celebrated music dramas comprising Der Ring des Nibelungen – better known simply as “The Ring.” Next, thought to have been influenced by Wagner, Tchaikovsky’s Francesca da Rimini presents a turbulent and ferocious ride with a symphonic poem based on the tragedy of Francesca da Rimini, a beautiful woman who falls in love with the brother of her brutal husband who in turn slays them both in revenge condemning them to Hell. Richard Strauss’s Ein Heldenleben (A Hero’s Life), also a symphonic poem, completes the program – sweeping and sumptuous – ending the evening on an encouraging and peaceful note.

Concerts are illustrated with brief remarks by TŌN’s inspiring musicians, whom will be on hand to speak with audience members during intermissions. TŌN’s outreach in the Hudson Valley includes free concerts in the region.  Details of those, and the Orchestra’s full season are available here.

Tickets: $25–$35, or 3-concert packages with 25% savings available from $67.50 Tickets available online at fishercenter.bard.edu, by calling the box office at 845.758.7900, or in person at the Fisher Center box office in the lobby of Sosnoff Theater.

*This concert will be repeated at Carnegie Hall on May 2.

The Orchestra Now
The Orchestra Now (TŌN) is a group of over 60 vibrant young musicians from 14 different countries around the globe: the United States, Bulgaria, China, France, Hungary, Malaysia, Mongolia, Peru, Poland, Spain, Taiwan, the United Kingdom, Ukraine, and Venezuela. All share a mission to make orchestral music relevant to 21st-century audiences. Hand-picked from hundreds of applicants from the world’s leading conservatories—including The Juilliard School, Shanghai Conservatory of Music, Royal Conservatory of Brussels, and the Curtis Institute of Music—the members of TŌN are not only rousing audiences with their critically acclaimed performances, but also enlightening curious minds by presenting on-stage introductions and demonstrations at concerts, offering program notes written from the musicians’ perspective, and connecting with patrons through one-on-one discussions during intermissions. To date, members of TŌN have earned positions with orchestras across the United States and in Europe. Some play regularly with the New York Philharmonic, Philadelphia Orchestra, and the Baltimore Symphony.

Conductor, educator, and music historian Leon Botstein founded TŌN in 2015 as a master’s degree program at Bard College, where he also serves as president. The Orchestra performs at Bard’s Richard B. Fisher Center for the Performing Arts, offering multiple concerts there each season as well as participating in the annual Bard Music Festival. The Orchestra also performs numerous concert series at major venues in New York, including Carnegie Hall, Lincoln Center, and The Metropolitan Museum of Art, as well as a schedule of free performances across New York City boroughs. TŌN has collaborated with many distinguished conductors, including Fabio Luisi, Neeme Järvi, Gerard Schwarz, and JoAnn Falletta.

Leon Botstein
Leon Botstein brings a renowned career as both a conductor and educator to his role as music director of The Orchestra Now. He has been music director of the American Symphony Orchestra since 1992, artistic co-director of Bard SummerScape and the Bard Music Festival since their creation, and president of Bard College since 1975. He was the music director of the Jerusalem Symphony Orchestra from 2003–2011 and is now conductor laureate. In 2018 he assumed artistic directorship of Campus Grafenegg and Grafenegg Academy in Austria. Mr. Botstein is also a frequent guest conductor with orchestras around the globe, has made numerous recordings, and is a prolific author and music historian. He is the editor of the prestigious The Musical Quarterly and has received many honors for his contributions to music. More info online at LeonBotstein.com.