A New SummerScape Commission from Choreographer Ronald K. Brown – with Live Music by Meshell Ndegeocello and Others (July 5–7) 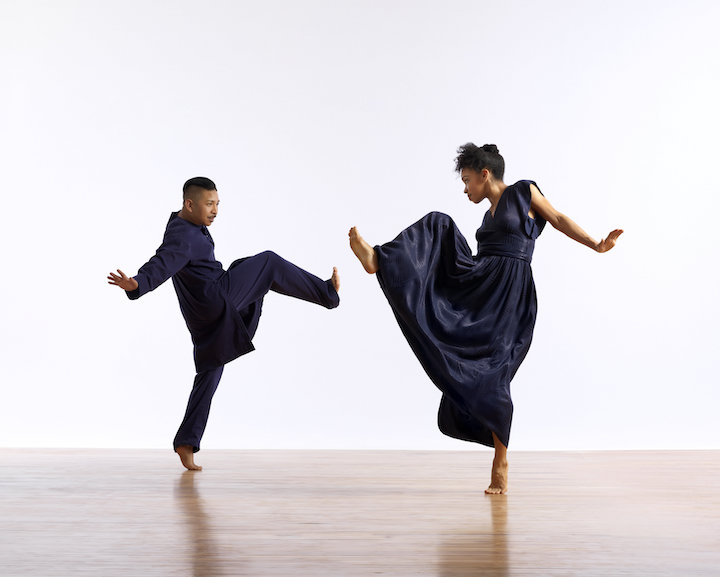 ANNANDALE-ON-HUDSON, NY: Evidence, A Dance Company and its founder and artistic director, Ronald K. Brown, make their Bard SummerScape debut with the world premiere of Grace and Mercy. A new SummerScape commission, this two-part program opens with Grace (live), a newly conceived version of Brown’s soulful masterpiece Grace, originally created in 1999 for the Alvin Ailey Dance Theater, where it is still one of the most popular works in the repertory today. To celebrate its 20th anniversary, Grace will for the first time be danced entirely to live music, performed by house and R&B artist Peven Everett and others. Evidence completes its double-bill with the world premiere of Mercy, Brown’s new companion piece to Grace (live), which is set to a brand-new score written and performed live by ten-time Grammy-nominated rock/soul singer-songwriter Meshell Ndegeocello. Grace and Mercy’s three performances take place on July 5–7 in the Frank Gehry-designed Fisher Center on Bard College’s glorious Hudson River campus. Click here to see a short sample of Ronald K. Brown/Evidence’s work.

Using movement to promote community in African American culture and acquaint audiences with the beauty of traditional African rhythms and forms, Ronald K. Brown, whose string of honors includes an Astaire Award and a Guggenheim Fellowship, is one of contemporary choreography’s most important voices. He has created numerous works for the Alvin Ailey American Dance Theater, the Jacob’s Pillow Dance Festival, Ballet Hispánico, and many others, as well as for Evidence, A Dance Company, which he founded in 1985. Known for its seamless integration of traditional African dance with contemporary choreography and spoken word, Brown’s Brooklyn-based company has appeared throughout the United States as well as elsewhere in the Americas, Africa, and Europe. Dance magazine observes:

“Evidence has become a mainstay in the modern dance world and Brown is now considered a vanguard among choreographers fusing Western contemporary dance with movement from the African diaspora.”

The New York Times identifies the hallmarks of Brown’s work as the following:

“Deep, spiritual seriousness. A sophisticated mastery of stage space. Music that makes you want to move. A vocabulary, drawn from many parts of the African diaspora, that Mr. Brown has developed into a personal language that’s flexible, richly expressive and irresistibly kinetic.”

As the paper marvels: “If there is any company working today whose dancers pack a more sophisticated and vibrant kinetic punch than those of Ronald K. Brown/Evidence, I can’t think of it.”

Grace (live)
Blending modern dance and West African idioms to depict a spiritual journey to the promised land, Grace is a “1999 classic” in which “the fireball intensity of the dancers … is astounding, something to be sensed as well as seen” (New York Times). As in many of Brown’s works, the work’s movement alternates fluidly between extremes, a serene solo for an angelic figure giving way to the whirling and pounding of multiple dancers reminiscent of urban warriors. Brown’s varied musical choices reflect his vision for the piece. Duke Ellington’s jazz standard Come Sunday provides spiritual grounding, Fela Kuti’s Afro-Pop beats evoke West African and African American traditions, and Roy Davis’s ethereal dance hit Gabriel conjures a contemporary yet timeless ambience. Gabriel was produced in collaboration with Peven Everett, who sang and played trumpet and keyboards on its original 1996 release. “One of the most understated, energised and passionate singers around” (BBC Music), Everett serves as lead vocalist and music director for Bard’s world premiere presentation of Grace (live).

Mercy
To complement Grace (live), Evidence gives the first performances of Mercy, which Brown created especially for SummerScape 2019. A companion piece to Grace, Mercy blends movement and music to lead both the performers and audience on a journey toward compassion and the joy of redemption. Brown explains:

“When I think of ‘mercy’ as the ‘forgiveness shown toward someone whom it is within their power to punish or harm,’ I am also charged with the desire to express how we can offer compassion to each other. It’s been a great and joyous challenge to see how the two dances on the program embody these strong emotions with the destination being a state of liberation, bliss and peace. I look forward to sharing the gifts of the dancer’s artistry.”

Mercy’s original score is the work of singer-songwriter Meshell Ndegeocello – “a visionary and a sensualist who sings with notes of honey, molasses and tar” (New York Times) – who will be on hand to perform its world premiere. Ndegeocello’s music draws on an array of influences, including funk, soul, R&B, hip-hop, reggae, rock, and jazz. In sync with Brown’s work, it is bound by a lyrical, spiritual search for love, justice, respect, resolution, and happiness. Her 1996 release Peace Beyond Passion was named one of NPR’s “150 Greatest Albums Made by Women,” and her most recent recording, Ventriloquism, scored the artist her tenth Grammy nomination.

Choreography by Ronald K. Brown
Original music for Mercy written and performed by Meshell Ndegeocello
Music from Grace performed live by Peven Everett and others

* Round-trip bus service from Manhattan is provided exclusively to ticket-holders for the performances on July 5 and 7. A reservation is required, and may be made by calling the box office at 845-758-7900 or by selecting this option when purchasing tickets. The round-trip fare is $40, and the coach departs from behind Lincoln Center, on Amsterdam Avenue between 64th and 65th Streets. Find additional details at: fishercenter.bard.edu/visit/transportation.

Tickets for all Bard SummerScape events are now on sale. For tickets and further information on all SummerScape events, call the Fisher Center box office at 845-758-7900 or visit fishercenter.bard.edu/summerscape.

Venues:
SummerScape opera, theater, and dance performances and most Bard Music Festival programs are held in the Sosnoff Theater or LUMA Theater in Bard’s Richard B. Fisher Center for the Performing Arts, designed by Frank Gehry and celebrated since its opening as a major architectural landmark in the region. Some chamber programs and other BMF events are in Olin Auditorium, and the Spiegeltent has its own schedule of events, in addition to serving as a restaurant, café, and bar before and after performances. Film Series screenings are at the Jim Ottaway Jr. Film Center in the Milton and Sally Avery Arts Center.

New York City Round-Trip Coach Transportation:
To make a reservation on the round-trip SummerScape coach provided exclusively to ticket holders for specific performances indicated by * in the listings above, call the box office at 845-758-7900 or select this option when purchasing tickets. The round-trip fare is $40 and reservations are required. The coach departs from behind Lincoln Center, on Amsterdam Avenue between 64th and 65th Streets. Find additional details at: fishercenter.bard.edu/visit/transportation.

Full Schedule:
For a complete schedule of SummerScape and Bard Music Festival events (subject to change), follow the links given below. Updates are posted at the festival web site fishercenter.bard.edu/summerscape.
Fisher Center members receive priority access to the best seats in advance, and those who join the Center’s email list receive advance booking opportunities as well as regular news and updates.

Tickets and Subscriptions: fishercenter.bard.edu/boxoffice; or by phone at 845-758-7900. Tickets to all mainstage events start at $25.

Updates: Bard’s “e-subscribers” get all the news in regular updates. Click here to sign up, or send an e-mail to fishercenter@bard.edu.

All programs are subject to change.

The 2019 SummerScape season is made possible in part through the generous support of Jeanne Donovan Fisher, the Martin and Toni Sosnoff Foundation, the Board of The Richard B. Fisher Center for the Performing Arts at Bard College, the Board of the Bard Music Festival, and Fisher Center members, as well as grants from the National Endowment for the Arts and the New York State Council on the Arts with the support of Governor Andrew Cuomo and the New York State Legislature.
#          #          #