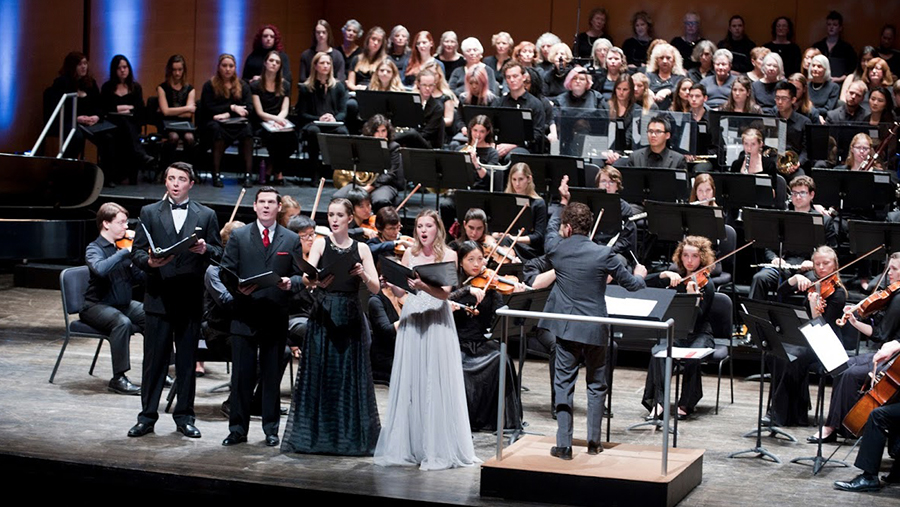 James Bagwell maintains an active international schedule as a conductor of choral, operatic, and orchestral music. He was recently named associate conductor of The Orchestra Now (TŌN), and in 2009 was appointed principal guest conductor of the American Symphony Orchestra. From 2009 to 2015, he served as music director of The Collegiate Chorale. Highlights of his tenure include conducting a number of operas-in-concert at Carnegie Hall, including Bellini’s Beatrice di Tenda, Rossini’s Moïse et Pharaon, and Boito’s Mefistofele. He conducted the New York premiere of Philip Glass’s “Toltec” Symphony and Golijov’s Oceana, both at Carnegie Hall. Since 2011, he has collaborated with singer and composer Natalie Merchant, conducting major orchestras across the country, including the San Francisco and Seattle Symphonies.

Bagwell prepared The Collegiate Chorale for concerts at the Verbier Festival in Switzerland; in 2012, the Chorale traveled to Israel and the Salzburg Festival for four programs with the Israel Philharmonic. Since 2003, he has been director of choruses for the Bard Music Festival, conducting and preparing choral works during the summer festival at the Fisher Center for the Performing Arts. He frequently appears as guest conductor for orchestras around the country and abroad, including the Cincinnati Symphony Orchestra, Jerusalem Symphony Orchestra, Tulsa Symphony, and the Interlochen Arts Festival. He is professor of music at Bard College, director of performance studies, and codirector of the Graduate Conducting Program at Bard College Conservatory of Music.

A renowned opera singer and recitalist, mezzo-soprano Stephanie Blythe is one of the most highly respected and critically acclaimed artists of her generation. Her repertoire ranges from Handel to Wagner, and German lieder to contemporary and classic American songs. Blythe has performed on many of the world’s great stages, such as Carnegie Hall, Metropolitan Opera, Covent Garden, Paris National Opera, San Francisco, Chicago Lyric, and Seattle Opera. She was named Musical America’s Vocalist of the Year in 2009, received an Opera News Award in 2007, and won the Richard Tucker Award in 1999. Blythe recently released her first crossover recording on the Innova Recordings label with pianist Craig Terry.Blythe’s performances include the title roles in Carmen, Samson et Dalila, Orfeo ed Euridice, La Grande Duchesse, Tancredi, Mignon, and Giulio Cesare; Frugola, Principessa, and Zita in Il Trittico; Fricka in both Das Rheingold and Die Walküre; Waltraute in Götterdämmerung; Azucena in Il Trovatore; Ulrica in Un Ballo in Maschera; Baba the Turk in The Rake’s Progress; Ježibaba in Rusalka; Jocasta in Oedipus Rex; and Ino/Juno in Semele. She also created the role of Gertrude Stein in Ricky Ian Gordon’s 27 at the Opera Theatre of Saint Louis.Blythe has appeared with many of the world’s finest orchestras, such as the New York Philharmonic, Boston Symphony, Chicago Symphony, Los Angeles Philharmonic, San Francisco Symphony, Opera Orchestra of New York, Hallé Orchestra, and Concertgerbouworkest, among others. She has also appeared at the Tanglewood, Cincinnati May, and Ravinia festivals, and at BBC Proms. Conductors with whom she has worked include Harry Bicket, James Conlon, Charles Dutoit, Mark Elder, Christoph Eschenbach, Mstislav Rostropovitch, Robert Spano, Patrick Summers, and Michael Tilson Thomas.Blythe has been presented in recital in New York by Carnegie Hall and Lincoln Center in both its Great Performers Series at Alice Tully Hall and American Songbook Series at the Allen Room, Town Hall, 92nd Street Y, and Metropolitan Museum of Art. She has also been presented by the Vocal Arts Society and at the Supreme Court in Washington, D.C.; Cleveland Art Song Festival; University Musical Society in Ann Arbor; Philadelphia Chamber Music Society; Shriver Hall in Baltimore; and San Francisco Performances.She has premiered several song cycles written for her, including Twelve Poems of Emily Dickinson by the late James Legg; Covered Wagon Woman by Alan Louis Smith, which was commissioned by the Chamber Music Society of Lincoln Center and recorded with the ensemble (CMS Studio Recordings); and Vignettes: Ellis Island, also by Smith, featured in a television program entitled Vignettes: An Evening with Stephanie Blythe and Warren Jones. She is also artistic director of the Fall Island Vocal Arts Seminar at the Crane School of Music and artistic director of the Bard Conservatory Graduate Vocal Arts Program.

Ira Coleman was born on April 29th, 1956 in Stockholm, Sweden.  He was raised in France until 1968 and thereafter lived in Germany for fourteen years.  Ira studied bass at Germany’s “Hochschule für Musik, Köln” from 1980 to 1982.  Thereafter, he moved to the US to attend Berklee College of Music in Boston and graduated in 1985.

Ira Coleman was the musical director for Ernest Ranglin’s Ska Ensemble from 1996-1999 and Dee Dee Bridgewater from 2002-2009.  Ira Coleman has branched out to play world music and has arranged, recorded and produced for musicians from Senegal and Mali.

John is the owner/executive producer of Sunjump Records. He has created music for theater, dance, film, TV commercials, and multimedia performance art. He is a music faculty member and artist-in-residence at Bard College and resides in New York State’s Hudson Valley.

Maximillian Jansen, a tenor originally from Cincinnati, Ohio, is a student in the Graduate Vocal Arts Program studying in the studio of Lorraine Nubar. Known for his sweet timbre and sensitivity to text, he has performed the roles of Ferrando in Così fan tutte, the titular role in Albert Herring, and Monostatos in Die Zauberflöte. Jansen has appeared as a soloist with Concerts in the Village, Cincinnati Fusion Ensemble, Civic Orchestra of Victoria, and Middletown Symphony. He has been a member of professional opera choruses such as Pacific Opera Victoria, Queen City Opera, and Cincinnati Opera. Jansen was a Schubert Fellow at SongFest at the Colburn School in 2014, where he worked with composers Libby Larsen, Jake Heggie, and John Musto in master classes on their own work. Jansen has collaborated with coaches including Graham Johnson, Sanford Sylvan, Vicki Kirsch, and Lisa Hasson. He holds a bachelor of music degree in vocal performance from Miami University (2015).

Pauline Tan is a Filipino mezzo-soprano whose deep love for poetry and song has taken her across the globe to pursue a career in music. She began her studies at the New England Conservatory in Boston, where she completed her undergraduate degree in vocal performance. Some notable performances at the conservatory include mezzo-soprano soloist for Duruflé’s Requiem, alto soloist for Handel’s Messiah, and alto soloist for Bernstein’s Chichester Psalms. She is a frequent soloist with the NEC Chamber Singers, with whom she was an alto section member. Her operatic debut was as Amastre in Serse, and in 2019 she sang the role of Ottavia in NEC’s production of L’incoronazione di Poppea. She has also performed the title role of Carmen and Mistress Quickly in Falstaff. She is pursuing a master’s degree in vocal arts at the Bard College Conservatory under the artistic direction of Stephanie Blythe, Kayo Iwama, and Erika Switzer. She has studied voice with Christopher Arceo and Karen Holvik, and is currently studying under Edith Bers.

Tate Tiemann is a baritone from Conowingo, Maryland. A recent graduate of Towson University, Tiemann is excited to be a part of the Bard Graduate Vocal Arts Program, pursuing his master’s degree in music. His most recent roles include Bob from The Old Maid and the Thief, Dr. Gregg from Gallantry, and Il conte d’Almaviva from Le nozze di Figaro. When he’s not singing, he enjoys cooking, watching medical dramas, and playing with his cat, Rómulo.

Margaret Tigue was recently a Vocal Arts Fellow at Tanglewood Music Center (TMC). In 2019, she was the soprano soloist in Verdi’s Requiem with The Orchestra Now, and was praised in OperaWire for “a power and a seeming effortlessness that was quite amazing.” Her performance highlights include the role of Helena in Benjamin Britten’s A Midsummer Night’s Dream, Mozart’s Exsultate, Jubilate with the Ann Arbor Camerata Orchestra, and the New York premiere of Tania León’s Memory at National Sawdust, and Oliver Knussen’s Whitman Settings with the TMC Orchestra. Tigue studies at the Bard Conservatory’s Graduate Vocal Arts Program, where she works with Stephanie Blythe, Kayo Iwama, and Lorraine Nubar. Tigue was awarded an encouragement award in the Michigan district of the Metropolitan Opera National Council Auditions in 2017, and received first prize in the University of Michigan Friends of Opera Undergraduate Competition in 2015.

Filipino American soprano Diana Schwam is receiving her master’s degree at the Bard Conservatory of Music, under the tutelage of Lorraine Nubar. As an avid lover of opera, she has portrayed La Contessa in Le nozze di Figaro, the title role in Massenet’s Cendrillon, and Madame Lidoine in Poulenc’s Dialogues des Carmélites with Oberlin Opera Theater. Schwam has also performed as Pamina (Die Zauberflöte), Zdenka (Arabella), and Donna Elvira (Don Giovanni). Recent highlights include performing at Oberlin College and Conservatory’s 2019 Commencement Recital, the soprano solo in Brahms’s Requiem with Oberlin’s 50th reunion class, and the premiere of a song cycle by composer Liam Kaplan in April 2019. Past highlights include the Danenberg Honors Recitals at the Oberlin Conservatory and in New York City, and a master class with the internationally renowned Marilyn Horne during her residency at the Oberlin Conservatory. A firm believer in the role of the singer-actor, Schwam has roots in her love of musical theater, which has taught her the importance of storytelling in her music making.