What’s On / Past Events / Demolishing Everything with Amazing Speed 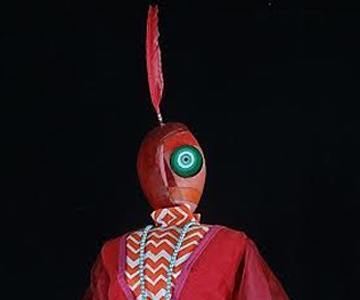 A wondrous elevator racing up to the heavens, a rich red woman with a single green eye, a baby smoking a giant cigar. . . . Award-winning puppet artist Dan Hurlin creates a surreal "puppet noir," based on four beautiful but disquieting plays written at the height of World War I by the Italian futurist artist Fortunato Depero. Hallucinogenic, fast-paced, and shot through with dark humor, these astonishing plays celebrate the energy and possibility of technology, while revealing the chilling parallels between their time and ours.

Hurlin, who lives and works in the Hudson Valley, discovered Depero’s scenarios during his Rome Prize Fellowship in Italy. They have never before been translated into English, published, or performed. Hurlin’s unique fusion of puppetry, music, and technology brings Depero’s images and visions—sometimes whimsical, sometimes disturbing and violent—to life on stage for the first time. With a live score by Dan Moses Schreier and combining the latest technology, from 3D printing to sound sampling, with centuries-old bunraku style puppetry, Demolishing Everything with Amazing Speed is a rapturous and wholly original wild ride. Dan Hurlin's Demolishing Everything with Amazing Speed puppets come to life in this preview by the New Yorker's Joan Acocella and video by Emily Rhyne. Join us for the following special events:
July 9 Opening Night Reception for Friends of the Fisher Center
July 10 Pre-Performance Talk at 1 pm
July 13 Post-Performance Conversation Ride the SummerScape Coach from New York City to the Fisher Center on July 9, 10, and 17. Make a night of it! Enjoy Out-of-Town and Night-Out packages, available for select performances of Demolishing Everything with Amazing Speed.