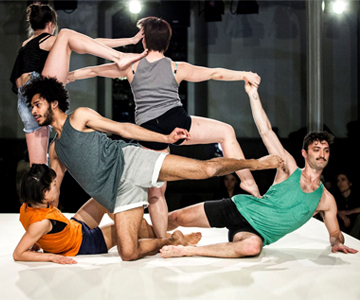 Thank You For Coming: Attendance

Thank You For Coming: Attendance

Faye Driscoll’s acclaimed work imagines a fantastical society in which performance is both a collective and political act. As audience and performers increasingly find themselves becoming one, a beautiful and chaotic shared identity emerges.

A Bessie Award–winning choreographer and director, Faye Driscoll was one of several dance artists to exhibit at Younger Than Jesus, the New Museum’s select triennial exclusively for artists born after 1976. The New York Times has praised Driscoll as a “startlingly original talent.” Her projects have received support from a Guggenheim Fellowship (2013), a Creative Capital award (2013), The Jerome Foundation (2012–2014), and a Foundation for Contemporary Art grant (2013).

“Faye Driscoll is a postmillenium, postmodern wild woman. A wild woman with a scrupulous sense of form that she tweaks into eye-opening weirdness. Ferocious, hilarious, and disturbing . . .”
– Deborah Jowitt, Village Voice

“Ms. Driscoll is fascinating in that she makes such utterly original work. It doesn’t look like anything you’ve ever seen before, nor can you imagine thinking it up.”
– Roslyn Sulcas, New York Times

Watch an excerpt from Faye Driscoll’s Thank You For Coming: Attendance, called "Tangle."

Read Erin Search-Wells’s "overnight review" of Thank You For Coming: Attendance, "And the Space Will Be Transformed," published as part of the Walker Art Center's Re:View series.