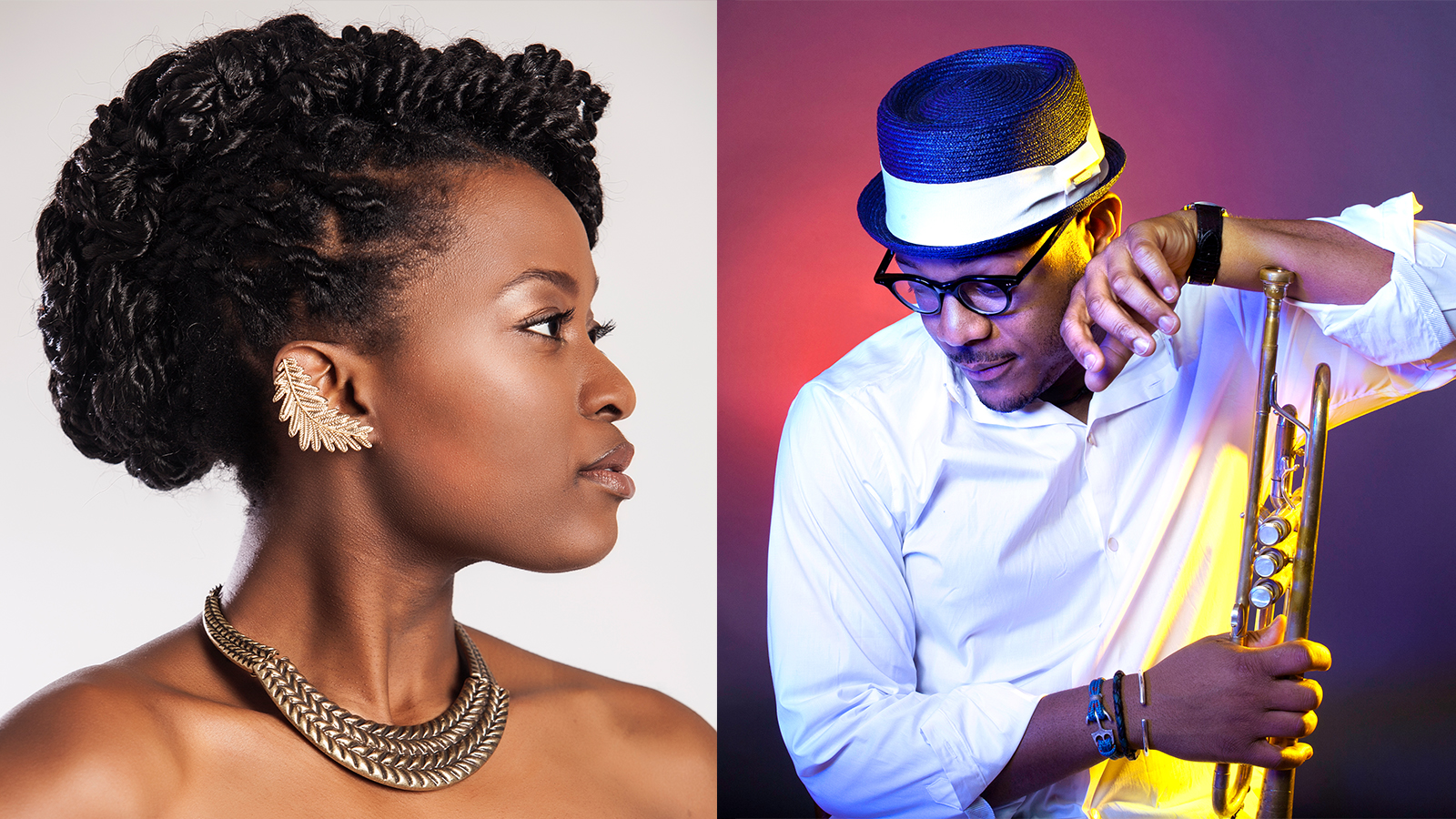 “Etienne Charles exhibits both an authentic preservation of the music of his native culture of Trinidad as a composer and bandleader, while broadening our scope of understanding through the collaborative sound of American jazz as it meets new colors, new textures, and new motifs across the world. It will certainly bring more of our public into the jazz audience.”  —Marcus Roberts

“An amazing Trumpet player, and Steel Drum player, and Cuatro player ... young Trinidadian who has held onto his heritage.”  —Monty Alexander

Over its century-plus history, jazz has forged its shape-shifting identity by encompassing a rainbow of musical dialects in an improvisation-infused setting. While jazz’s potency launched into popular appeal based on the integration of the European classical music sensibility and the grassroots of African-American cultural heritage, it has not remained a static idiom. Indeed, jazz has become organically enlarged, expanded and revitalized by cultivating new influences into the tradition, from the Afro-Cuban movement of the ’40s to today’s artists embracing their ethnic heritage.

One of the most compelling and exciting young jazz artists ushering the genre into the groundbreaking new territory is trumpeter/bandleader ETIENNE CHARLES, who, still in his 20s, has already recorded three impressive and well-received albums for his own Culture Shock Music imprint. His new album, Creole Soul, is a captivating journey of new jazz expression. It buoyantly taps into a myriad of styles rooted in his Afro-Caribbean background and plumbs the musical depths of the islands, from calypso to Haitian voodoo music. Also in the jazz amalgam mix are rock steady, reggae, belair, kongo, and rock as well as the influence of Motown and R&B music Charles listened to on his parents’ record player when he was growing up.

“Jazz is Creole music,”  says Charles who was born in Trinidad, relocated first to Florida and then New York to further his jazz studies (graduating, respectively, from Florida State's and Juilliard’s jazz programs) and today teaches jazz trumpet at Michigan State University. “As a person in the new world, I’ve been influenced by so much music. And my family has a mixed background, with French Caribbean, Spanish and African roots as well as Venezuelan influences. I come from a fusion of rhythms, a fusion of cultures. That&rsquo9;s what this album is all about: focusing on soul music that is Creole at heart.”

As befitting an artist who excels with such a diversity of musical styles, Charles has performed with a range of musicians, from Roberta Flack, Rene Marie, and David Rudder to Wynton Marsalis, Johnny Mandel, the Count Basie Orchestra, and Maria Schneider. He also worked with steel pan all-star Len “Boogsie” Sharpe as well as jazz masters Frank Foster and Benny Golson.

Charles was taught by one of his mentors, primo jazz pianist and Florida State professor Marcus Roberts, that “going backwards is the only way to go forward.” So, while the 10-song Creole Soul is steeped in the jazz tradition, the spirit of the Caribbean also drives it. The young trumpeter, in addition to composing six originals, delivers his unique spin on Creole-oriented tunes from past masters, ranging from Bob Marley to Thelonious Monk. The album—at turns, rootsy, spicy, and grooving—features at its core Charles’s crisp trumpet intonation and his lucid melodic lines. Joining the leader for the Creole music adventure is Charles&rsquo9;s band, composed of tenor saxophonist Jacques Schwarz-Bart, alto saxophonist Brian Hogans, Kris Bowers on piano and Fender Rhodes, bassist Ben Williams, and drummer Obed Calvaire. Guests include vocalist Erol Josué, guitarist Alex Wintz, and percussionist/vocalists Daniel Sadownick and D’Achee.

Creole Soul opens with voodoo priest Erol Josué’s distinctive voice delivering a chant in the Haitian Creole language, Kweyol. “To me there is nothing more Creole than Haiti,” says Charles. “What Erol sings here is something like ‘take a break, I’m bringing news,' but he’s also speaking in code like in the slave days, so it’s not really translatable.”

Erol’s welcome segues into the leadoff track, “Creole,” a fast-paced romp fueled by the kongo groove from northern Haiti, with a bridge that moves from a minor key to a major. “This tune was inspired by a trip to Haiti," Charles says. “It’s about a struggle that turns into empowerment. When we return to the groove after the middle part of the tune, it’s the release from the struggle.” He adds that a key influence to the tune is the song “Je Vous Aime Kongo.”

Quieter and just as soulful, “The Folks” is another Charles groove-charged tune with Bowers’ Fender Rhodes colors and a fine trading solo run by the trumpeter and tenor saxist Schwarz-Bart. It’s a song that celebrates Charles’s parents, who, he says, exemplify Creole soul. His mother was the Trinidadian High Commissioner to Nigeria, where he visited and began to discover firsthand with his family where the African diaspora first took place along the Slave Coast of Nigeria and in Ghana.

Introduced with a belair groove, the uptempo “Roots” pays homage to Charles’s Martinique roots and his family’s long association with the French-speaking island. “This is about me discovering things about my ancestors after so many years,” Charles says. The beat clips and the improvisations are like conversations, especially the trumpet-guitar talk. Williams’ bass lines are funky, Calvaire’s drums are slamming, and the band participates in a compelling vocal chant.

The four covers are scattered throughout the disc. The catchy, bluesy “You Don't Love Me (no no no)” was a rock-steady hit in the ’60s by reggae singer Dawn Penn. Originally a Mississippi blues tune by Bo Diddley and a number that Willie Cobbs reinterpreted, the song is given a swing by Charles as well as full-horn harmony gusto.

The tender ballad “Memories,” a rearranged old calypso by Winsford Devine, pays tribute to people Charles has known who have passed away. Made famous by the great Trinidadian calypso singer, the Mighty Sparrow, “Memories” is dedicated to another of the trumpeter’s teachers, the steel pan/percussionist Ralph MacDonald (whose father was from Trinidad). He had played on Charles’s previous albums but died of cancer at the age of 67 in 2011. “Ralph was one of my biggest mentors,” Charles says. “He was like an uncle to me. We recorded and did gigs together. I remember visiting him when he was flat in bed, feeding him ice cream. It was a very emotional session for me because he wasn’t a part of it.”

Charles originally arranged the lyrical and bright interpretation of Monk’s “Green Chimney” when he recorded with pianist Eric Reed on his 2012 The Baddest Monk album. While Monk was not from the Caribbean, Charles assumes the influence was there given that when the pianist moved from North Carolina to New York, he lived in the Caribbean neighborhood San Juan Hill. Veteran jazz pianist Monty Alexander, who has also been a major influence on Charles’s career, seconded this. “The melody is a calypso,” says Charles.

The next track features Charles romancing on the Marley classic, “Turn Your Lights Down Low,” that’s played with a slight reggae beat. "It’s one of my favorite Marley tunes,” Charles says. “We play it a lot at gigs. We slow it down and even sing it. It&rsquo9;s another great example of Creole soul because reggae has its roots in calypso, blues, doo-wop, and New Orleans funk.”
The last three songs on Creole Soul are Charles&rsquo9; compositions, beginning with “Midnight,” which features classic trumpet/tenor sax harmonies and exhilarating solo runs by the leader, Bowers and Schwarz-Bart. “It&rsquo9;s about the stillness of the night when nothing and everything is going on,” he says. “It’s when I get my most creative ideas. The song has calypso with Haitian Mascaron dance grooves. The melody itself actually came from playing a wrong chord when I was teaching one day.”

The quiet, radiant ballad “Close Your Eyes” is delivered as a duet with Bowers on piano. “I wrote the tune, but never played it,” Charles says. “We ran it through and just played together—solo and background—just playing off each other.” The album ends playfully with the spirited “Doin’ the Thing,” which Charles says is a “rhythm tune that&rsquo9;s still jazz.” At the heart of the song: calypso. “My rule is that I end with a jam that’ll be straight up calypso,” he says. “I don’t want to get away from that. I’m proud and connected. It actually reminds me of what I heard the house rent parties in New York were all about. They always played calypso at those.”

The New York Times calls Charles an auteur who is “one of [jazz’s] more ambitious soloists and composers,” Jazz Times applauds him as a “daring improviser” and DownBeat celebrates his tone as “melodically captivating” and “rhythmically agile” that makes his music “immediately pleasing.” After three albums, released on Culture Shock, Charles has garnered a welcomed response to his Caribbean roots-informed jazz. Creole Soul, his most accomplished recording so far in his young career, holds great promise to a future of more ebullient and intimate artistry.

Jazz at the Fisher Center