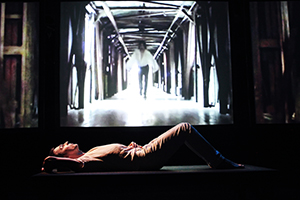 Jack Ferver is a New York–based choreographer, writer, performer, and teacher. His work has been presented in New York City at The Kitchen; The French Institute Alliance Française, as part of Crossing the Line; PS122; New Museum; Museum of Arts and Design, as part of Performa 11; Danspace Project; Abrons Arts Center; and Dixon Place; in Boston at the Institute of Contemporary Art; in Houston at Diverse Works; and in France at Théâtre de Vanves. Shorter and solo works have been presented at MoMA PS1, Andrew Edlin Gallery, Dance New Amsterdam, La MaMa E.T.C., the Culture Project, and NP Gallery (all New York City). His work has been written about in the New York Times, Financial Times, New Yorker, ArtForum, Modern Painters, Time Out New York, New York Post, Boston Globe, and Dance magazine. He teaches at New York University and Bard College, and has set choreography at The Juilliard School. For more information, go to www.jackferver.org.

Marc Swanson’s work has been widely shown nationally and internationally at institutions such as New York City’s Whitney Museum of American Art, MoMA PS1, Museum of Arts and Design, and Richard Gray Gallery; the Walker Art Center in Minneapolis, Contemporary Arts Museum of Houston; Kemper Museum of Contemporary Art in Kansas City;  St. Louis Museum of Art; the Saatchi Gallery in London; and Tensta Konsthall in Stockholm. His work has been written about in the New York Times, ArtForum, New Yorker, Art in America, Time Out New York, Time Out Chicago, V Magazine, and VICE magazine.  For more information, go to  www.marcswansonstudio.com*

Ralph Lemon is a director, choreographer, writer, visual artist, and curator, and the artistic director of Cross Performance, a company dedicated to the creation of cross-cultural and cross-disciplinary performance and presentation. His most recent works include the innovative dance/film project 4Walls (2012), and How Can You Stay in the House All Day and Not Go Anywhere? (2008–10). In fall 2012, he curated the performance series Some sweet day at MoMA and the acclaimed 2010 performance series I Get Lost at Danspace Project in New York City.

His visual art works have been shown in solo and group exhibitions in venues across the country including the Studio Museum of Harlem, The Kitchen, and Margaret Bodell Gallery (New York City); Yerba Buena Center for the Arts (San Francisco); Contemporary Art Center (New Orleans); and the Walker Art Center (Minneapolis).

Lemon was an IDA (Institute of Diversity in the Arts) Fellow at Stanford University (2009); artist in residence at Temple University (2005–06); Miller Endowment Visiting Artist at the Krannert Center (2004); Fellow of the Humanities Council and Program in Theater & Dance at Princeton University (2002); and Associate Artist at Yale Repertory Theatre (1996–2000). In fall 2011, he was a visiting critic with the Yale University, School of Art, Sculpture Department. Currently he is the 2013–14 Annenberg Fellow at MoMA, where he has curated a series of performance essays titled Value Talks*.

Jennifer Monson is a choreographer, performer, and teacher. Since 1983, she has explored strategies in choreography, improvisation, and collaboration in experimental dance. Through ongoing research she explores cultural and scientific understandings of large-scale phenomenon to discover embodied ways of knowing and reimagining our relationship to the environment. Monson is the founder and artistic director of  iLAND—Interdisciplinary Laboratory for Art, Nature, and Dance. iLAND explores the power of dance in collaboration with other fields to illuminate a kinetic understanding of the world. This dance research organization upholds a fundamental commitment to environmental sustainability as it relates to art and the urban context, and cultivates cross-disciplinary research among the arts, environmental science, urban design, and other related fields. In addition, Monson is a professor at the University of Illinois Urbana Champaign as part of an initiative of the Environmental Council.

John Kelly is a performance and visual artist and the artistic director of John Kelly Performance. His works range in scale from solo to larger ensemble, and have been performed at New York City’s The Kitchen, Lincoln Center, the Whitney Biennial, PS122, and BAM’s Next Wave Festival, Mass MoCA, La MaMa, Walker Arts Center, and London’s Tate Modern. He has received two Bessie Awards; two Obie Awards; two NEA American Masterpiece Awards; and a CalArts Alpert Award. Fellowships include the 2007 Rome Prize in Visual Art at the American Academy in Rome, The Radcliffe Institute for Advanced Study at Harvard, The Guggenheim Foundation, Sundance Theatre Institute, and a 2013 USA Artists Award Fellowship. Among his acting credits are the Broadway production of James Joyce’s The Dead; Christopher Marlowe’s Dido, Queen of Carthage and Rinde Eckert’s Orpheus X at American Repertory Company; Threepenny Opera at Atlantic Theater Company; David T. Little’s chamber opera Dog Days; and The Clerk’s Tale, a film by James Franco. He has frequently performed the work of John Cage, and is currently a visiting artist in residence at Bard College*. A recording of these songs, Beauty Kills Me, will be released by New Albion Records this fall. For more information, see johnkellyperformance.org.

Nature Theater of Oklahoma is an Obie Award–winning New York City art and performance group under the direction of Pavol Liska and Kelly Copper. Since Poetics: a ballet brut, their first dance piece created as an ensemble, the members of Nature Theater of Oklahoma have been devoted to making the work they don’t know how to make, putting themselves in impossible situations, and working from their own ignorance and unease. They strive to create an unsettling live situation that demands total presence from everyone in the room. They use the ready-made material around them, found space, overheard speech, and observed gesture, and through extreme formal manipulation and superhuman effort, they affect in their work a shift in the perception of everyday reality that extends beyond the site of performance and into the world in which we live. Tad Beck (B.F.A., School of Visual Arts, New York City; M.F.A., Art Center College of Design, Pasadena) lives and works in New York City and Vinalhaven, Maine. He has had solo exhibitions at Los Angeles County Museum of Art (LACMA), Samuel Freeman Gallery, Marisa del Re Gallery, Nathalie Karg Gallery, and the Center for Maine Contemporary Art; and two-person exhibitions at Los Angeles Contemporary Exhibitions (with Jennifer Locke) and Theodore:Art (with Diana Cherbuliez). His work has also been exhibited at the Addison Gallery of American Art, Portland Museum of Art, Worcester Art Museum, Apexart, Rupert Goldsworthy Gallery, Debs & Co., Jancar Gallery, Monte Vista Projects, and Krowswork, among others. His work is represented in the collections of the Addison Gallery of American Art, LACMA, Sweeney Gallery at the University of California, Riverside, Portland Museum of Art, and Emily Fisher Landau, among others. For more information, go to www.tadbeck.com.

The borders between the visual and performing arts are in flux. Many contemporary artists are developing hybrid practices that transcend conventional categories of theater, dance, performance, visual art, installation, music, and film. Meanwhile, museums and art galleries are once again embracing live performance, with major institutions in the United States and around the world presenting the work of choreographers and theater artists in galleries that have traditionally displayed painting, photography, and sculpture.

The visual art world’s renewed interest in performance has created new opportunities and challenges for performing artists, and engendered much theoretical and practical discourse among curators, artists, and scholars about institutional identity and infrastructure, the value of live performance in the art market, the compensation and labor of artists, and the possibility (or impossibility) of acquiring and archiving ephemeral works of art. This interdisciplinary traffic has, however, largely flowed in one direction. Performance has entered, and occasionally transformed, visual arts institutions, but performing arts centers—theaters, concert halls, dance venues— have been comparatively unaffected by the art world’s “performative turn.”

The House Is Open is a temporary exhibition that poses a fanciful question: What might happen if a performing arts center returned the compliment by adopting the relational and curatorial strategies of an art museum? For these four days the Fisher Center for the Performing Arts is entirely reimagining its interaction with artists and audiences. Six works have been installed throughout the building that in various ways explore the contemporary interplay of visual art and performance. The Center is open all day, and with a single admission ticket the public can then wander freely through “galleries” of traditional and nontraditional spaces, creating for themselves a unique itinerary of performances and installations.

Although the exhibition’s experimental framework is temporary and playful, its central inquiry is serious. How might performing arts institutions think differently about the relationship between artists and audiences? Could this experiment lead to new ideas about the creation, funding, and reception of new hybrid art practices? We are eager to learn of your experiences of The House Is Open, and invite you to dream with us about models of spectatorship and engagement in arts centers of the future.

A pop-up exhibition of installation and performance

The borders between the visual and performing arts are in flux. Many contemporary artists are developing hybrid practices that transcend conventional categories of theater, dance, performance, visual art, installation, music, and film. Meanwhile, museums and art galleries are once again embracing live performance, with major institutions in the United States and around the world presenting the work of choreographers and theater artists in galleries that have traditionally displayed painting, photography, and sculpture.
The House Is Open is an inquisitive and playful pop-up exhibition that invites you to experience the Fisher Center in an entirely new way. For four extraordinary days, the Fisher Center will be transformed into a temporary museum, hosting the work of major artists who are working at the fast-changing intersection of the performing and visual arts. With a single admission ticket, you can discover and interact with a varied range of installation/performances in parts of the building not normally open to the public. You’ll be free to wander through hidden areas of the Fisher Center as if you were in a gallery—and return as many times as you like over the weekend. A pop-up café and bookstore complete the experience. The house will truly be open.

Tad Beck | Double Document
On view in the LUMA Theater Lobby
November 20–23 during exhibition hours
On view from October 15, 2014, through mid-January, 2015

Colloquium: The House Is Open
Center for Curatorial Studies
November 19 at 6:30 pm

Live Arts Bard programs are made possible by the generous support of the members of the LAB Creative Council. Ralph Lemon and Jack Ferver received LAB Choreographic Fellowships, made possible in part by The Andrew W. Mellon Foundation. The presentation of Scaffold Room is made possible in part by the New England Foundation for the Arts’ National Dance Project, with lead funding from the Doris Duke Charitable Foundation and The Andrew W. Mellon Foundation, with additional support from the National Endowment for the Arts, and is produced by Cross Performance, Inc. and MAPP International Productions.