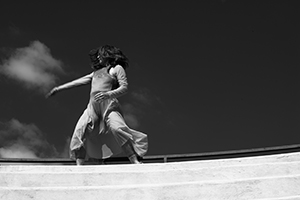 Jennifer Monson is a choreographer, performer, and teacher. Since 1983, she has explored strategies in choreography, improvisation, and collaboration in experimental dance. Through ongoing research she explores cultural and scientific understandings of large-scale phenomenon to discover embodied ways of knowing and reimagining our relationship to the environment. Monson is the founder and artistic director of  iLAND—Interdisciplinary Laboratory for Art, Nature, and Dance. iLAND explores the power of dance in collaboration with other fields to illuminate a kinetic understanding of the world. This dance research organization upholds a fundamental commitment to environmental sustainability as it relates to art and the urban context, and cultivates cross-disciplinary research among the arts, environmental science, urban design, and other related fields. In addition, Monson is a professor at the University of Illinois Urbana Champaign as part of an initiative of the Environmental Council.

Susan Becker (Costume Designer) works as a designer, artist, and educator in the field of fashion and dress. For the past 20 years she has designed for traditional and experimental settings, from the fashion industry to collaborations on stage, film, and site-specific projects. Recent collaborators, in addition to Monson, include artist Deke Weaver (WOLF) and choreographer Tere O’Connor (Sister). Becker has also taught courses on fashion and dress for Rhode Island School of Design and is currently a lecturer at the University of Illinois. Her solo work centers on explorations of the social psychology of dress and culture.

Tatyana Tenenbaum (Performer) is originally from Western Massachusetts. Her creative practice involves modes of researching connections between the body and the voice, as well as other energetic and somatic entry points. She has performed and collaborated with Yoshiko Chuma, Daria Fain & Robert Kocik, and Levi Gonzalez, among others. She is currently developing a new evening work, which will be presented at Temple University in Philadelphia, Pennsylvania, later this month. She has been involved with Live Dancing Archive since its premiere at The Kitchen, and is honored to reenter the material from a new perspective.

Jeff Kolar (Composer) is a sound artist and curator working in Chicago. His work includes cross-platform collaboration, low-powered radio, and live performance. It often involves activating sound in unconventional, temporary, and ephemeral ways, using appropriation and remix as a critical practice. Kolar is a free103point9 Transmission artist, and the founder and director of Radius, an experimental radio broadcast platform. His sound work has been released on Panospria (Canada), H.A.K. Lo-Fi Record (France), and broadcast on the Radio Network, WFMU (USA), CKUT (Canada), and Radio Libertaire (France). He has performed and exhibited at the New Museum and The Kitchen (both New York City), ORF RadioKulturhaus (Austria), and CTM Festival for Adventurous Music (Germany). In 2013, Time Out New York gave his work with choreographer Jennifer Monson, the “Best Dance of 2013” award.

Robin Vachal (Video Installation) has worked as a videographer, video installation producer, editor, and teacher for more than 10 years. Prior to this, she worked in film and video distribution and film festival programming. This included the New York LGBT Film Festival. She studied new media and video installation at the Interactive Telecommunications Program at NYU’s Tisch School of the Arts and received her M.F.A. in 2001. Vachal has documented Jennifer Monson’s and iLAND’s projects since 2001. She has a keen interest in ideas around landscape and is currently working on a project documenting shifting experiences of place in North Dakota.

Davison Scandrett (Production Manager) has supervised lighting and technical production for more than 1,000 performances in 46 states and 25 countries. Production management credits include Wendy Whelan’s Restless Creature, Jennifer Monson’s Live Dancing Archive, Denis O’Hare & Lisa Peterson’s An Iliad, and Miguel Gutierrez’s Everyone, and serving as director of production for the Merce Cunningham Dance Company from 2008–12. He has created lighting designs for Paris Opera Ballet, Sarah Michelson, Pam Tanowitz, Rahsuan Mitchell, Silas Riener, and Rebecca Lazier. In 2007, he received a Bessie Award for his collaboration with Sarah Michelson and Parker Lutz on the visual design of DOGS.

Valerie Oliveiro (Lighting and Stage Designer) is a Singapore-born project manager, designer, and photo-based artist. After a brief period of organizing visual arts and performance projects in Singapore, she attended Yale School of Drama. From 2007–12, she was the staff photographer at Krannert Center for the Performing Arts in Urbana, Illinois, where she met Jennifer Monson. She has photographed projects for Jennifer Monson, David Rousseve, Bebe Miller, Ralph Lemon, and Ong Keng Sen, among others. Most recently, she collaborated with Deke Weaver, John Heginbotham, Andrea Miller, and Julie Tolentino. She lives in Minneapolis.

Jennifer Monson’s newest work is a visceral exploration of the dancing body as a physical archive of experience and place. Compiled from more than a decade of dance-based environmental research, Live Dancing Archive draws from video documentation of Monson’s past performances in addition to improvised scores.

This piece is truly a collaboration and it has been a great pleasure to work with this brilliant team of artists. Robin Vachal’s experience of documenting the Osprey Migration (2002) as well as my other recent work is central to this project. Joe Levasseur worked with me on my last theatrical piece Flight of Mind (2005), and Jeff Kolar created two compositions for me over the last three years. Susan Becker’s conceptual rigor has had a profound impact on the piece. Betsy Brandt’s sensitive feedback shaped the project with gentle and courageous guidance. Davison Scandrett’s artistic input has profoundly impacted the production and he’s been a masterful production manager. Niall Jones, Tatyana Tenenbaum, and Val Oliveira, along with the other collaborators, have helped me to think more deeply about the wonderful possibilities of an infinite archive and we have together worked at creating novel ecosystems together. The creation of the digital archive has been a labor of love and patience by the brilliant Youngjae Josephine Bae.

This kind of work doesn’t get made without all kinds of support. I am grateful to The Kitchen for commissioning the work, especially to Sarah Michelson for curating it. A big thanks to Carla Peterson for encouraging me to take the risk to move into this new iteration of the piece with three new collaborators. Thanks to Gideon Lester, Caleb Hammons, and Bob Bursey for curating us in this wonderful series of performances with such great artistic company. —Jennifer Monson