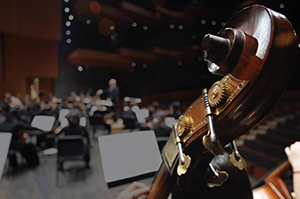 American conductor Jeffrey Milarsky is highly acclaimed worldwide for his impeccable musicianship, exhilarating presence, and innovative programming. He has been hailed for his interpretation of a wide range of repertoire, which spans from Bach to Xenakis. In recent seasons he has worked with such accomplished groups as the San Francisco Symphony, American Composers Orchestra, MET Chamber Ensemble, Los Angeles Philharmonic, Milwaukee Symphony, Bergen Philharmonic, New York City Opera, Chamber Music Society of Lincoln Center, New World Symphony, Tanglewood Festival Orchestra, and the New York Philharmonic chamber music series. In the United States and abroad, he has premiered and recorded works by many groundbreaking contemporary composers, in venues such as Carnegie Hall, Zankel Hall, Davies Symphony Hall, Alice Tully Hall, Walt Disney Concert Hall, Boston’s Symphony Hall, and at IRCAM in Paris. This year Milarsky will make his New York Philharmonic debut conducting the CONTACT series, a Japanese-based program that includes music of Takemitsu, Messiaen, Fujikura, and Mochizuki.  VIEW MORE >>
Milarsky has a long history of premiering, recording, and performing American composers, and in keeping with that goal he was recently presented the prestigious Ditson Conductor’s Award. Established in 1945, it is the oldest award honoring conductors for their commitment to the performance of????American music. Past honorees have included Leonard Bernstein, Leopold Stokowski, and James Levine. Milarsky’s interest and dedication has brought forth collaborations with esteemed composers such as Adams, Babbitt, Cage, Carter, Corigliano, Crumb, Davidovsky, Druckman, Gordon, Lang, Mackey, Rouse, Shapey, Subotnick, Wuorinen, and an entire generation of young and developing composers.

A much-in-demand timpanist and percussionist, Milarsky has been the principal timpanist for the Santa Fe Opera since 2005. In addition, he has performed and recorded with the New York Philharmonic, Philadelphia Orchestra, and Pittsburgh Symphony. He has recorded extensively for Angel, Bridge, Teldec, Telarc, New World, CRI, MusicMasters, EMI, Koch, and London records. Milarsky received his bachelor and master of music degrees from The Juilliard School. Upon graduation, he was awarded the Peter Mennin Prize for outstanding leadership and achievement in the arts.

Andrés Martínez de Velasco was born in Mexico City in 1991 and began taking piano lessons when he was 6. He started composing when he was 8, rewriting the right hand of the Beethoven bagatelles he was playing at the piano. He fi rst formally studied composition at the McGill Conservatory in Montreal after completing high school in Mexico City. After a year in Montreal, he came to Bard to take part in the Conservatory´s fi ve-year, dual-degree program, from which he will be graduating this May; his second major is physics. He holds the Stephen and Belinda Kaye Scholarship. At Bard he has studied composition with Joan Tower, George Tsontakis, and John Halle. Andrés has composed music for the Lake Champlain Chamber Music Festival, the Deer Valley® Music Festival, New York University´s Dynamic Music Festival, Bard´s Graduate Vocal Arts Program, and new music ensemble Contemporaneous. He wishes to express his gratitude to everyone at the Bard Conservatory and all those who support it for their help, dedication, and instruction and for making the Bard Conservatory an extraordinary place. Adam Zuckerman was born in 1992 in Los Angeles, California. In fall 2010 he enrolled in The Bard College Conservatory of Music, where he is pursuing a B.M. in music composition and a B.A. in classical studies. He recently completed his Senior Project in classical studies, a study of the Greek hymnic tradition. He will graduate in May.

Since its 2007 premiere, John Adams’s opera Doctor Atomic has enjoyed numerous productions on two continents. Adams and his collaborator Peter Sellars have been widely praised for giving an operatic voice to J. Robert Oppenheimer (1904–67), one of the creators of the atomic bomb. It was not the fi rst time they had put real-life celebrity fi gures from the 20th century on the stage: Doctor Atomic was preceded by Nixon in China and The Death of Klinghoffer. And just like the 37th president and the MS Achille Lauro hijacking victim, the director of the Manhattan Project became a larger-than-life fi gure whose story pointed beyond itself. No topic could be timelier or more universal in its impact than the ethical dilemma of a scientist whose revolutionary discoveries cause death and destruction on an unprecedented scale. Sellars compiled the libretto from original documents; the action takes place at the Los Alamos laboratory in New Mexico, and at Alamogordo in the desert, where the bomb was fi rst detonated on July 16, 1945.  VIEW MORE >>
After the great success of the opera, Adams drew a purely orchestral work from the original score. Co-commissioned by Carnegie Hall, the St. Louis Symphony Orchestra, and BBC Proms, the work received its premiere in London’s Royal Albert Hall, under the direction of the composer, on August 21, 2007. Adams’s publisher, Boosey & Hawkes, has included the following description on its website:


The symphony is cast in a sustained, 25-minute, single-movement arch, not unlike the Sibelius Seventh Symphony, a work that has had an immense effect on Adams’s compositional thinking. The opening, with its pounding timpani and Varèse-like jagged brass fanfares, conjures a devastated postnuclear landscape. The frenzied “panic music” that follows comes from one of Act Two’s feverish tableaux that evoke the fi erce electrical storm that lashed the test site in the hours before the bomb’s detonation. The ensuing music is taken from moments that describe the intense activity leading up to the test. One hears the U.S. Army General Leslie Groves, here impersonated in the boorish trombone music, berating both the scientists and his military subordinates, music that gives way to the ritual “corn dance” of the local Tewa Indians. The symphony concludes with an instrumental treatment of the opera’s most memorable moment, a setting (originally for baritone voice, here played by solo trumpet) of John Donne’s holy sonnet, “Batter my heart, threeperson’d God.” This is the poem that the physicist hero of the opera, J. Robert Oppenheimer, loved and that inspired him to name the desert test site “Trinity.” (Reprinted by kind permission of Boosey & Hawkes)

The 20th century saw more debates about how composers should compose than any other era in the history of music (although earlier periods certainly had their share of this type of debates). Therefore, it is all the more remarkable that there was an extraordinarily gifted young composer in the 1930s who refused to join the fray and embrace any of the current schools of composition. Instead, Samuel Barber quietly continued the 19th-century Romanticism inherited from his teachers, selectively incorporating contemporary techniques. He found his unique voice within that tradition: a sensitive, highly cultivated personal writing style, often inspired by classical literature and faithful to classical forms  VIEW MORE >>
The Essay for Orchestra is one of Barber’s early works. (It came to be called the “First” Essay when Barber wrote a second one in 1942; much later, in 1978, he added a Third Essay to his oeuvre.) The work begins with a somber theme played by the lower strings in a slow tempo. The development of this theme leads to a powerful brass fanfare, after which the tempo suddenly changes to Allegro molto. This fast, scherzo-like material forms the main body of the work. The sprightly staccatos (short, separated notes) and the consistent repetition of the same rhythmic pattern make this section a 20th-century descendant of Mendelssohn’s scherzos. Against this light-footed motion, the opening theme is played in a lyrical and expressive tone by the solo horn and the cellos, after which the scherzo music becomes more intense and dramatic. Finally the opening theme returns, more poignantly than before, and the piece ends in a slow tempo. The earlier brass fanfare is recollected tersely, then fades away until only a single octave is heard, played by violins and piano.

Barber had the good fortune to be introduced to Arturo Toscanini at a young age. The composer, together with his friend and colleague Gian Carlo Menotti, visited the great conductor during the summer of 1933. Barber’s aunt, the contralto Louise Homer, had sung under Toscanini on numerous occasions. However, several years passed before Barber showed the maestro any of his music. He submitted the First Essay and Adagio for Strings in 1938, and Toscanini decided to program both. The Essay was one of only a handful of contemporary American works he ever conducted; the premiere, therefore, became one of the most important and most talked-about musical events of the year. Toscanini’s endorsement turned the 28-year-old Barber into a prominent fi gure on the American musical scene, and while the war of musical styles was being fought all around him, he went his own way, undeterred, writing music the way he felt it. As he put it in one of his rare statements about his own music: “I just go on doing, as they say, my thing. I believe this takes a certain courage.”

The title of this fi rst part is taken from a poem by A.C. Swinburne entitled By the North Sea, which was, as W.G. Sebald writes in his book The Rings of Saturn, Swinburne’s tribute to the gradual dissolution of life as seen through the remains of centuries of destruction and erosion infl icted by the sea on the land and sea-side towns of Dunwich, England. If you look out from the cliff-top across the sea towards where the town must once have been, you can sense the immense power of emptiness, Sebald writes at one point. Both of these works observe, in their particular way, the traces of an inevitable process of deterioration that overcomes all things in all places. Through these observations an image gradually emerges that may be likened to a landscape. It must be noted, however, that the image is not the landscape itself, but rather it is comprised of the perceived traces of an otherwise hidden, even internal, landscape. It is this quality that initially inspired the present piece, which is to say that neither work provides a ‘program’ of any sort. There is no program – save for this program note. This piece is not an attempt to construct a chronological narrative that moves toward some inevitable conclusion but is instead an attempt to frame an image that is, in a manner similar to the framing of a memory, of an elliptical nature. Material unfolds in a fl uctuating manner: it expands and contracts, stops and starts, circles back on itself at various points, and evolves in such a way that moves inward on itself rather than forward. It is this kind of fl uidity of movement that the piece strives for.

—Adam Zuckerman Retrato (2014), meaning portrait in Spanish, is my attempt to explicitly represent the inevitability of subjectivity. As I was composing it, the image I consistently had in my mind was that of a well defi ned line drawn in pencil on white paper and then blurred by rubbing it with your fi ngers.The line still has a well defi ned shape but it is impossible to tell where exactly it ends, width-wise. Musically, this resulted in blurred melodic contours arising from phasing within the orchestra, among other things. Beyond this concept, Retrato was inspired by the music of Charles Ives and my own childhood memories.