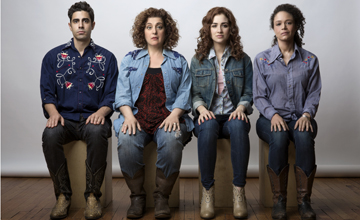 The entire run of Oklahoma! is sold out!
For sold-out performances you may add your name to a wait list in person, one hour prior to curtain in the LUMA lobby.  Entry is not guaranteed.

More than seven decades after its wartime premiere, director Daniel Fish (Rocket to the Moon, SummerScape 2005) invites us to experience Oklahoma! in an entirely new way—a revelatory chamber production where actors and audience come together as one community, sharing food, music, and song.

Rodgers and Hammerstein’s first collaboration overturned the conventions of musical theater when it premiered in 1943, introducing an unprecedented depth of psychological realism to a form better known for light comic entertainment. Set in the Territory of Oklahoma in the years before statehood, this complex drama combines the sunny romance of farm girl Laurey Williams and cowboy Curly McClain with the darker story of a community rising up against a reviled outsider, Jud Fry.

Like his contemporary Carlos Chávez, Richard Rodgers turned to folk sources to create a new national musical identity, in a score that includes many of his best-loved songs, including “Oh, What a Beautiful Mornin’,” “Many a New Day,” and “I Cain’t Say No.”Staged in the round with audience members seated at long tables and featuring new music arrangements for a six-piece band, this intimate Oklahoma! offers you the chance to experience Rodgers and Hammerstein’s exuberant, complex musical as if for the first time.

Due to the intimate nature of this production and moments of violence, children under the age of 12 will not be admitted.