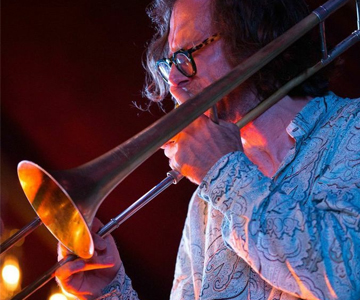 Evan Christopher combines virtuosity, immaculate taste, and enthusiasm with a commitment to exploring the full range of possibilities in the New Orleans clarinet tradition. His highly personal brand of “contemporary, early jazz” strives to extend the legacies of early Creole clarinetists such as Sidney Bechet, Barney Bigard, and Omer Simeon. Critics remarking on Christopher’s dynamic expressiveness have coined his style “close-encounter music” (New York Times) and have called his respect for the music traditions of New Orleans, “a triumph, joining the present seamlessly to a glorious past” (The (UK) Observer).

His journey on Clarinet Road began in 1994, when he left his native California to join the New Orleans music community. Diverse freelance work included gigs with musicians such as Al Hirt and veterans of Preservation Hall to funk and brass bands including the Nightcrawlers and Galactic. But in 1996, he left for San Antonio, Texas, to appear nightly for nearly three years with the Jim Cullum Jazz Band and record several of their public radio programs, Riverwalk: Live from the Landing.

When Christopher returned to New Orleans in 2001, his published research on the New Orleans clarinet style initiated pursuit of a master’s degree in musicology at Tulane University. He began touring internationally and producing his Clarinet Road series of CDs (STR Digital). In August 2005, when federal levees failed in the aftermath of Hurricane Katrina decimating the city, Christopher left for Paris at the invitation of the French Embassy’s Cultural Services division, where he formed his group, Django à la Créole. This Europe-based quartet fused Gypsy Swing with Latin-tinged grooves of New Orleans and beyond and was distinguished for an acoustic intimacy paired with driving swing. Critics charmed by the group queried, “Is there a more graceful band at work at the moment?” (The Sunday Times, UK). Three CDs for Lejazzetal (London), in partnership with Frémeaux & Associés (Paris)—Django à la Créole (2007), Finesse (2010), and LIVE! (2014)—earned the group critical attention worldwide for its elegant character.

As a composer, Christopher’s original songs are the high point of acclaimed recordings including Delta Bound (Arbors, 2007) featuring pianist Dick Hyman, The Remembering Song (Arbors, 2010) featuring guitarist Bucky Pizzarelli, his clarinet feature on the Grammy-winning New Orleans Jazz Orchestra’s Book One (2012), and his latest Clarinet Road CD, Bayou Chant & Other Textures (STR Digital, 2016). In July 2010, he had the honor to debut his Treat It Gentle Suite with the Minnesota Orchestra, which was the first concerto written for clarinet with band in the New Orleans style.

Christopher began his musical training on clarinet at age 11. In high school, he received the Louis Armstrong National Jazz Award and was one of the first graduates of the prestigious Idyllwild Arts Academy. He continued studies at the University of Southern California and graduated with honors from California State University, Long Beach. A brief teaching stint at the University of New Orleans saw the creation of a New Orleans music ensemble that performed with guest mentors, such as Lucien Barbarin and Marcus Roberts.

Since 2008, having returned again to New Orleans, Christopher actively advocates for the cultural workforce and music education. He frequently tours with and records as a guest with forward-looking artists, while performances under his own name are often complemented by workshops and educational and community outreach. Occasional columns about the music scene and New Orleans culture for NolaVie.com, evidence his passion for the city’s indigenous traditions.

Learn more about Christopher from his website: http://www.clarinetroad.com/. Sarah Elizabeth Charles is a rising vocalist/composer based in New York City. She has worked and studied with artists such as George Cables, Geri Allen, Nicholas Payton, Sheila Jordan, Jimmy Owens, and Carmen Lundy and released her debut record, Red, in September of 2012 with her band, the S.E. Charles Quartet. As the active vocalist in a number of bands (including AJOYO, Manner Effect, Transient Beings, and Enoch Smith Jr.’s Misfits), Sarah has performed at many venues throughout her career. These venues have included the White House, Gillette Stadium as a national anthem singer for the New England Patriots, Bern International Jazz Festival in Switzerland, Port-au-Prince International Jazz Festival, Kennedy Center, Blue Note in New York City, Pittsburgh JazzLive International Festival, Burlington Jazz Festival, Apollo Music Café, Blue Note in New York City, Poisson Rouge, Dizzy’s Club Coca-Cola, and Rose Theater with Jazz at Lincoln Center.

In addition to her performances, Sarah is an active educator. She works as a teaching artist with Carnegie Hall’s Musical Connections program, has a private lessons studio in New York City, and is developing an early childhood music education program with Rise2Shine, a nonprofit organization based in Fond Parisien, Haiti.

Sarah’s critically acclaimed sophomore project, Inner Dialogue, released March 24, 2015, on Truth Revolution Records, features her band along with coproducer/special guest Christian Scott. Along with the release of this project, Sarah has recently performed at the Rose Theater (along with the great Andy Bey and Molly Johnson) in Jazz at Lincoln Center’s “Celebrating Lady Day” event, Duc des Lombards/The New Morning in Paris, Harlem Stage Gatehouse for her Carnegie Hall Neighborhood Concert, and Isaac Stern Auditorium at Carnegie Hall. One can only look to the future for more unique music and performances from this one of a kind artist.

Learn more about Charles on her website: http://www.sarahelizabethcharles.com. André Mehmari is considered one of the most talented young musicians of his native Brazil. His activities as pianist, composer, arranger, and instrumentalist are highly regarded both in popular and classical music. His compositions and arrangements have been performed by important Brazilian orchestras (OSESP) and chamber ensembles (São Paulo String Quartet) and his career in jazz and Brazilian popular music has gained wide attention as he is recognized for his work in jazz festivals and concerts.

Born in 1977 in Niterói, he began to study music with his mother at the age of five, and completed an organ course in the Conservatory of Ribeirao Preto. At the age of 10, having been self-taught in jazz improvisation, he wrote his first compositions. After beginning his professional career playing piano and organ in social events, he later formed his own jazz trio, demonstrating his abilities as composer and performer in local jazz clubs. At the age of 15, while teaching organ in the Conservatory of Ribeirao Preto, Mehmari was invited to compose a method for keyboard beginners. The result was a 20-piece collection, a work greatly appreciated by young musicians and their teachers. Mehmari’s precociousness as a composer and multiinstrumentalist was well documented by the media.

In 1995, he moved to São Paulo to study at the São Paulo State University. In the same year he won the university’s competition for original Brazilian popular music. The same honor was awarded to him for classical music in 1997.

After recording his first CD (a reward for the Visa MPB first-prize winner), which was highly praised by reviewers and listeners, Mehmari performed in various Brazilian concert halls. Odisséia, an improvised piano trio album with longtime collaborators Célio Barros and Sérgio Reze, was recorded shortly after the Visa CD.

A new CD, Lachrimae, was released in 2004 by the audiophile label CAVI. Two piano trios are the center of this recording with special guests Mônica Salmaso (voice), Dimos Goudaroulis (cello), and Luca Raele (clarinet). The combination of Brazilian MPB classics in highly creative arrangements and Mehmari’s compositions create a very special portrait of the pianist’s unique style and language. Also won the National Composition Competition Award “Camargo Guarnieri”, with “Omaggio a Berio” based in Monteverdi’s music.

Mehmari made his U.S. premiere at the 2005 edition of Spoleto Festival USA in Charleston, South Carolina, stunning the audience with his blend of virtuosity, vitality, and musicality. He was invited to play with his trio on the jazz stage at the TIM festival in 2006. After winning the Carlos Gomes Award for classical music revelation of the year of 2006, Mehmari was appointed resident composer for the São Paulo State Wind Band. He also wrote original orchestral music for the official PAN American Games ceremonies that took place in the legendary Maracanã Stadium, Rio de Janeiro.

Mehmari played under the direction of Maria Schneider at the Ouro Preto Jazz Festival in Minas Gerais and released the Continuous Friendship album (Adventure Music) in duet with mandolin virtuoso Hamilton de Holanda. In 2008, Mehmari released a CD entirely dedicated to his own compositions, About waltzes and trees, and he toured the northeast of Brazil with Ivan Lins, playing both Lins’s and his own compositions at the 30th anniversary special edition of the traditional Pixinguinha Project, Mehmari also wrote an arrangement for Ivan Lins and the Metropole Orkest Amsterdam, performed under the direction of Vince Mendoza.

A piano solo album dedicated to the music of the Clube da Esquina was recently released. With the quintet album Nonada, Mehmari was nominated for the 2008 Latin Grammy Awards. He also wrote a double concerto for jazz piano, clarinet, and winds, performed with clarinet master Gabriele Mirabassi and the São Paulo State Wind Band.

Mehmari composed and performed the Concert for Jazz Piano Trio and Strings, commissioned by the São Paulo State Orchestra. For the São Paulo Dance Company he wrote a full scale ballet, which premiered in April 2016.

A Mehmari-Mirabassi duet CD called Miramari has been released both in Brazil and abroad. In 2010, he signed with the main contemporary Italian label EGEA and composed for the Petrobras Sinfonica “Contraponto, Ponte e Ponteio,” which premiered under Isaac Karabtchevsky at the Rio de Janeiro Municipal Theater. After receiving a commission from the German TV Deutsche Welle, Mehmari wrote “The City of Sun” for the Heliopolis Symphony. The work was successfully premiered in Germany at the Beethovenfest in Bonn and Berlin. Mehmari recently toured solo piano in Japan and played with de Holanda the new release Gismontipascoal in several European countries.

Learn more about Mehmari on his website: http://www.andremehmari.com.br/. Chris Washburne is one of those rare musicians whose musical activities cross many styles and cultural borders. From early in his career he refused to be pigeonholed as just a jazz or classical player, but instead has continually pursued a diverse path. Washburne is freelancing as a studio musician and performing trombone, bass trombone, tuba, didjeridu, and percussion with various classical, jazz, rock, and Latin groups in New York City. He also tours extensively with various groups and has performed throughout North America, Europe, Asian, Africa, South America, Central America, and the Caribbean.

Pre-performance talk 7 pm
Looking Back: The Global Roots of Jazz
Bandleader and Associate Professor of Music at Columbia University, Chris Washburne, delivers an illuminating talk on the origins, global roots, and influences of the jazz genre.

Bring the family: buy three or more tickets and save 30%. Discount will be applied at check out. Premium tickets excepted from this offer.