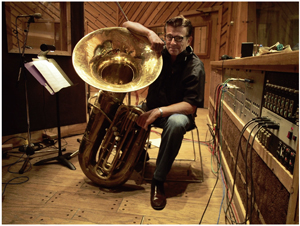 1920s: Birth of the Big Band
Vince Giordano & the Nighthawks

Hear the music of an era of bootlegged booze, the Foxtrot, and Jazz Age decadence in an evening of vintage swing by Grammy Award-winning Vince Giordano & The Nighthawks.

Big Band leader and multi-instrumentalist Giordano brought the sounds of the Roaring Twenties to life in HBO’s Boardwalk Empire (and can be seen & heard throughout all five seasons) and has recorded for countless films and TV series over the past three decades, with recent titles including Café Society (2016), Carol (2015), and the first season of the new Amazon series Z: The Beginning of Everything (2017). Giordano was recently featured in the multi-award winning documentary There’s a Future in the Past, a behind-the-scenes look at the group’s virtuosity, vintage musical instruments, and more than 60,000 period band arrangements.

For an authentic look back at the Birth of the Big Band, join Vince Giordano & The Nighthawks as they bring the joyful syncopation of the 1920s to the Spiegeltent through the music of such essential bandleaders as Fletcher Henderson, Don Redman, Jean Goldkette, and others.

View the Jazz Through the Looking Glass series here.

Location
This event has passed.