What’s On / Past Events / Fantasque 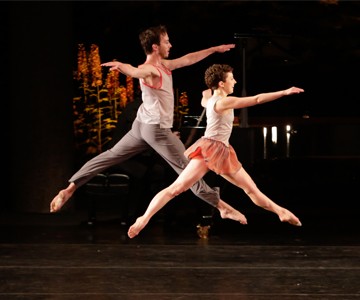 Fantasque is an ebullient and magical pageant created by two brilliant artists. Choreographer John Heginbotham teams up with puppeteer Amy Trompetter to craft a new ballet for audiences of all ages. Giant puppets and human dancers join forces to create a fable of a battle of light and darkness, with a fantastical cast of characters featuring giant babies, blue angels, devils, rats, and a restaurant where the customers are tuxedo-wearing fish.

Ottorino Respighi, a contemporary of Giacomo Puccini, adapted a suite of piano works by Giaochino Rossini to create the ballet score La Boutique fantasque. Sergei Diaghilev’s Ballets Russes mounted the first production in 1919 with choreography by Léonide Massine and designs by the Fauvist painter André Derain. Now Heginbotham, formerly of the Mark Morris Dance Group and choreographer of SummerScape 2015’s Oklahoma!, and Trompetter, of Bread and Puppet Theater and founder of the Hudson Valley’s Redwing Blackbird Theater, are creating an entirely new work to Respighi and Rossini's beloved music.

Read the New Yorker's summer dance preview, where Heginbotham and Trompetter's Fantasque is in the spotlight.

"Audiences have a chance to enter into Heginbotham's entertaining universe, and they shouldn't miss it. . . . His works seem to have personalities of their own. You want to know them." –New Yorker

"Once in a blue moon a dance theater work comes along to enchant both adults and children." –WQXR on Amy Trompetter's The Happy Prince

Join us for the following special events:
July 1 Opening Night Reception for Friends of the Fisher Center
July 2 Post-Performance Conversation
July 3 Pre-Performance Talk at 1 PM Ride the SummerScape Coach from New York City to the Fisher Center on July 3. Make a night of it! Enjoy Out-of-Town and Night-Out packages, available for select performances of Fantasque. This event is part of The New York State Presenters Network Presenter-Artist Partnership Project made possible through a regrant from the New York State Council on the Arts, a state agency with the support of Governor Andrew Cuomo and the New York State Legislature.

Family Pack—buy three or more tickets to Fantasque and save 20%.

Family Pack—buy three or more tickets to Fantasque and save 20%.