What’s On / Past Events / National Take a Stand Orchestra: Youth Orchestra of the East

National Take a Stand Orchestra: Youth Orchestra of the East 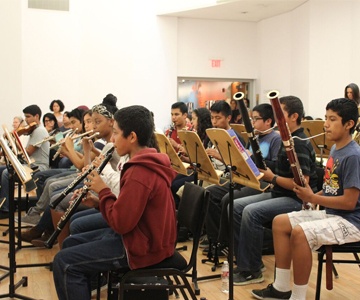 By offering young people from across the country the opportunity to learn from exceptional musicians, become ambassadors of their programs, and—for many—travel out of state for the first time, the National Take a Stand Festival aims to develop a model for excellence and a national community of citizen musicians from historically excluded populations in the United States. In August, Bard College hosts an orchestra of students from El Sistema–inspired programs across the eastern United States in a five-day festival.

Leon Botstein, president of Bard College and music director of the American Symphony Orchestra, will lead Youth Orchestra of the East in the festival orchestra’s culminating performance at the Richard B. Fisher Center for the Performing Arts.

The National Take a Stand Festival is a three-year project that began in 2015 with a teacher-training pilot program. In 2016, there will be two regional youth orchestra festivals: one at Aspen Music Festival and School and one at Bard College. Next year will feature a seven-day national youth orchestra camp and a final performance in Los Angeles, led by Los Angeles Philharmonic Music Director Gustavo Dudamel, himself a graduate of Venezuela’s El Sistema, and featuring young musicians from both regional festivals.

Take a Stand—a partnership of the Los Angeles Philharmonic, Bard College, and the Longy School of Music of Bard College—is an innovative initiative that supports social change through music. Inspired by El Sistema, Venezuela’s revolutionary music education program, Take a Stand supports the field through national conferences and a Master of Arts in Teaching in Music degree program.