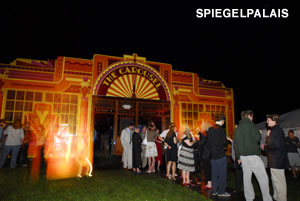 “One ought to call everything by its right name; and if one doesn’t dare do it in everyday life, at least one should do it in a fairy tale!”—Hans Christian Andersen

Bard SummerScape’s popular SpiegelPalais, having extended its run for an additional three weeks, has announced programming for the final weeks of this extraordinary performance venue. The SpiegelPalais will continue to present a variety of events and offer dining services for audiences through August 20, the final date of the 17th annual Bard Music Festival: Franz Liszt and His World. For information on the all festival events, including SpiegelPalais, phone the Fisher Center box office at 845-758-7900 or visit the website at fishercenter.bard.edu

Spiegel Salon, Thursday to Sunday at 8:30pm
Offering a late-night bar with entertainment, the Spiegel Salon will be the place for audiences and artists to meet over a drink or a casual bite and enjoy the SummerScape evenings.

With FREE cabaret performances at 8:30pm, the night has only just begun.

From August 10 –13 at 10:00 pm the John Esposito Trio delivers your favorite show tunes and jazz standards.

From August 17-20 at 10:00 pm Blueberry enchants you with a distinctive and danceable starlit vintage groove.

SPIEGELSALON SCHEDULE
Thursday, August 10 at 8:30pm, FREE!
Stoney Clove Lane rocks its way from the Catskill Mountains to play and plait guitar, keyboard, bass, and drum, along with the occasional noisemaker of unknown origin. Their sincere vocals make for a revival of what needs reviving. Come and be amused and renewed!

Friday, August 11 at 8:30pm, FREE!
Singer-songwriter Bar Scott elicits lush like nobody’s business. Combining equal parts confession, intelligence, resolve, and heart, you’re sure to be taken in by her guileless performance, which does away with the wall between artist and audience.

Saturday, August 12 at 8:30pm, FREE!
Studio Stu is a true entertainer. Offering his own brand of jazz and a quick wit,
dauntless antics are sure to ensue. He brings us a musical instrument of his own invention, the “Studivarious.” This single string, stand up, washtub bass is played by Studio Stu with what can only be called virtuosity.

Sunday, August 13 at 8:30pm, FREE!
Jeremy Lyons and Greg Schatz of Jeremy Lyons and the Deltabilly Boys rejuvenate old-time swing and swampy blues with infusions of funk, reggae, and rockabilly. This is how to kick up a good time, and if you’re not here you’re not really having one.

Thursday, August 17 at 8:30pm, FREE!
The Relatives cover punk rock classics and new wave —- Blondie, Iggy Pop, Lou Reed, The New York Dolls, Patti Smith, The Ramones, The Clash, and more. How you remember your favorite song is how you’ll hear them tonight, but remember this: authenticity has never been this fun to dance to!

Friday, August 18 at 8:30pm, FREE!
Garnering both international success and popularity since the 1970s, pop maestro Tim Moore crafts ballads and the like on a wide variety of instruments. There’s more than one reason his songs have been covered by artists such as Art Garfunkle and Ritchie Havens. His genius for arrangement makes structure invisible and melodicism intangible.

Saturday, August 19 at 8:30pm, FREE!
Inimitable jazz maven Tara Venditti delivers a vocal performance at once lissome and robust. Accompanying her are Tom Cipullo, whose work has been heard on four continents, and Francesca Tanksley, who has been noted as “a vivid presence” by jazz critic Nat Hentoff. Permuting tradition, these three will exceed expectations before and after they beguile as they test standards against innovation.

Sunday, August 20 at 8:30pm, FREE!
Smokey’s Western Combo features idiosyncrasy as a filter through which a hellacious time is born on guitar, fiddle, steel guitar, bass, and drums. This five-piece band brings you hot Western Swing and the songs of Bob Wills, Milton Brown, Spade Cooley, and Johnny Cash. Having played guitar for Beck, Neil Diamond, The Dixie Chicks, Rufus Wainwright, Patsy Montana, Wanda Jackson, Beth Orton and Tom Waits, Smokey Hormel is best known for his work on Johnny Cash’s (Grammy-winning) Hurt and God’s Gonna Cut You Down. The only trouble here will be sorting out infectious personality from mastery of a sound that just feels good.

Bard’s SpiegelPalais is one of the few Spiegeltents owned and operated by the Klessen family in Belgium (www.spiegeltent.be). These exquisite rotundas are made of carved
wood, canvas, and glass, with ornate interiors that feature a shining parquet dance floor, beveled mirrors, stained-glass windows, and ballooning velvet canopies. In their heyday, Spiegeltents toured the lowlands of Europe as traveling dance halls, wine-tasting marquees, and cabaret venues. These famed “palaces of mirrors” were named for the myriad glittering mirrors that surround the interior. The mirror tents became the domain of night owls and a symbol of the wild fin-de-siècle period in France and Belgium. Both Marlene Dietrich and Josephine Baker made their debuts in Spiegeltents