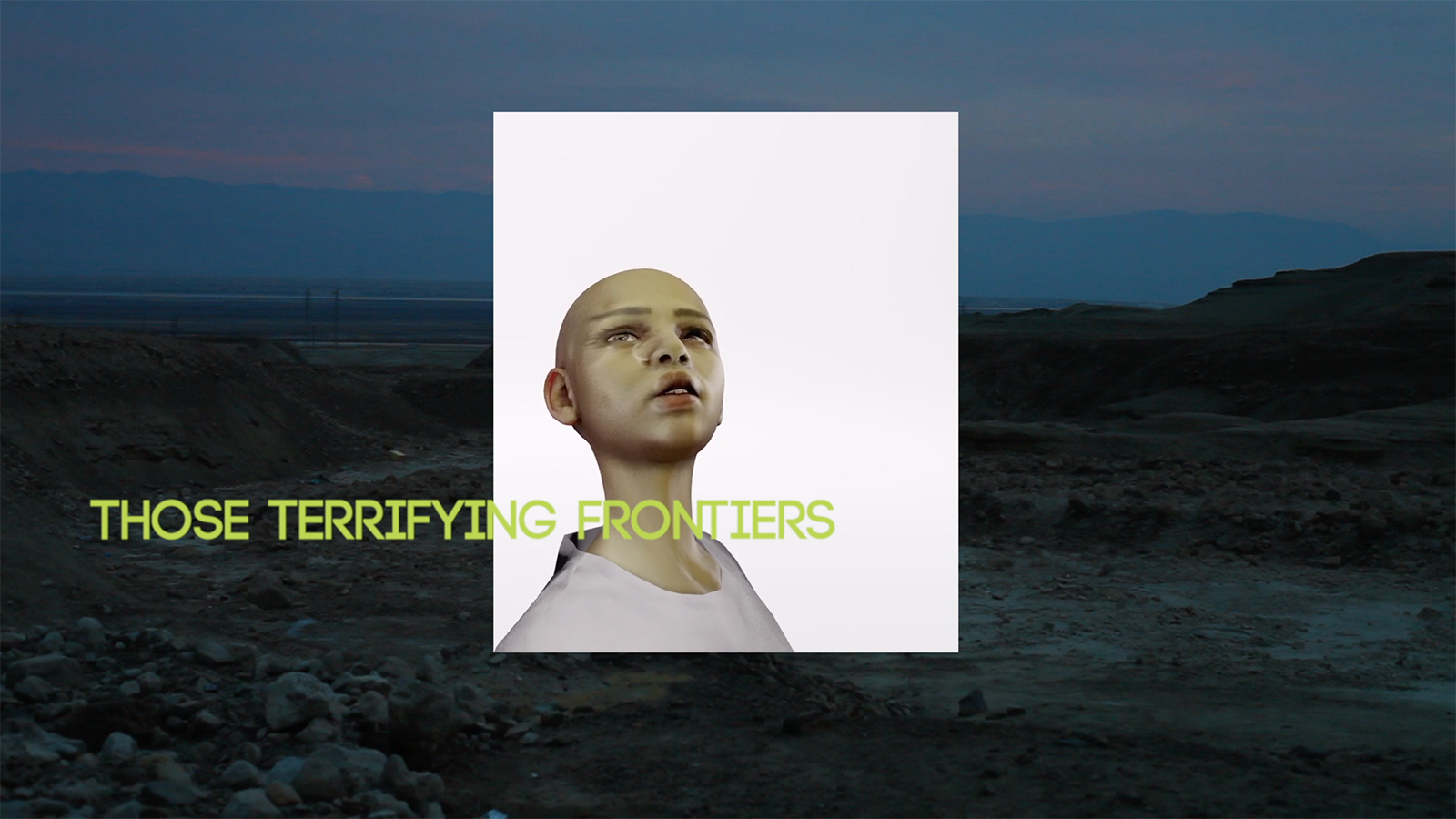 Basel Abbas and Ruanne Abou-Rahme (b.1983) work together across a range of sound, image, text, installation and performance practices. Their practice, largely research based, is engaged in the intersections between performativity, political imaginaries, the body and virtuality. Across their works they probe a contemporary landscape marked by seemingly perpetual crisis and an endless ‘present’,  one that is shaped by a politics of desire and disaster. In their projects, they find themselves excavating, activating and inventing incidental narratives, figures, gestures and sites as material for re-imagining the possibilities of the present. Largely their approach has been one of sampling materials both existing and self-authored in the form of sound, image, text, objects and recasting them into altogether new ‘scripts’. The result is a practice that investigates the political, visceral, material possibilities of sound, image, text and site, taking on the form of multimedia installations and live sound/image performances.

They were fellows at Akademie der Kunste der Welt in Cologne in 2013 and artists in residence at the Delfina Foundation, London in 2009. They are recipients of the Sharjah Biennale Prize in 2015 and The Abraaj Prize in 2016. Their most recent publication ‘And Yet Amy Mask Is Powerful’ is published by Printed Matter in New York.

Muqata'a is a musician and MC who creates music from sampled material, field recordings and electronic devices. The results range from hip-hop beats to glitch. His albums include Inkanakuntu (2018), Dubt Al-Ghubar (2017), La Lisana Lah(2017) and Hayawan Nateq (2013). Muqata’a is also the co-founder of the Ramallah Underground collective (2003–2009) and Tashweesh, a sound and image performance group in collaboration with artists Basel Abbas and Ruanne Abou-Rahme.  He has composed several international and local film scores, as well as dance theater performances, and is now working on different collaborative and solo projects. Upcoming and recent performances include Sonar Festival (Barcelona), Boiler Room (Ramallah), CTM Festival (Berlin).  His most recent album Inkanakuntu is out on Discrepant records.

At those terrifying frontiers where the existence and disappearance of people fade into each other (part 2) brings together a site-specific video and sound installation by Palestinian American artists Basel Abbas and Ruanne Abou-Rahme and a new performance by Tashweesh with musician/performer Muqata’a. The combination of their different practices, in a joint performance using sound, music, and images, results in an exploration of the collision between returns, erasure, and disruption.

From the returns of the land and stubborn vegetation that does not die, to artifacts that are reactivated as living matter, figures that return in virtual form, and disruptive bodies that keep reappearing on borders, both the installation and performance address the intentional erosion of bodies, land, and structures in different forms, and also their reappearance in spaces where they “should not be.” These projects invite us to consider the forms of entanglement between the destruction of bodies and the erasure of images, and the conditions under which these same bodies and images might reappear.​​​​​​​ This program is a part of the 2019 Live Arts Bard Biennial: Where No Wall Remains.

Save $20 when you purchase the Sunday Package for the coach and all performances.Estimated run time is 45 minutes.

There is no late seating for this performance.